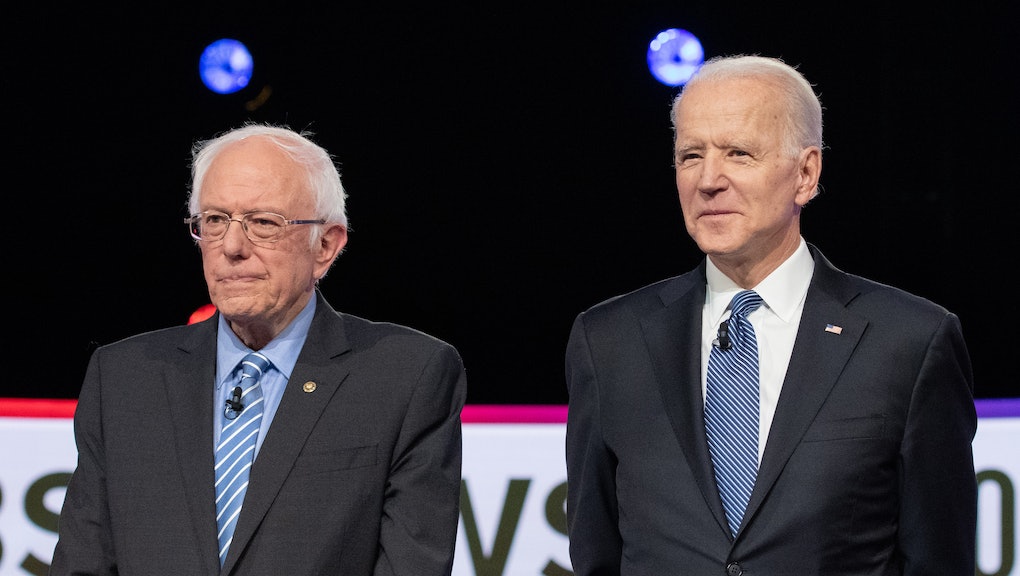 When it comes to vice presidential candidates, there's a lot at stake for Biden and Sanders

The veepstakes are heating up in the Democratic primary, as Vermont Sen. Bernie Sanders and former Vice President Joe Biden prepare for the final months of a campaign that is now essentially a two-man race. Rumor mills are working overtime as pundits float names of potential vice presidential candidates, while presumably, inside the campaigns, strategists are crunching the data on how various options would affect each candidate’s chances of winning the White House.

The considerations span everything from demographics and identity to geography — calculations, for example, like whether choosing a woman of color is more important than picking someone from a swing state. Political realities can get in the way, too: Wisconsin Sen. Tammy Baldwin has been floated as a potential pick for Sanders, but because she is from a swing state that’s trending Republican, selecting her could cost the Democrats a vulnerable Senate seat given that it’s possible a Republican could win the race to replace her.

Another commonly discussed topic is home state advantage — the notion that choosing a VP from a state is likely to give the presidential candidate a boost there. This was often mentioned when Hillary Clinton selected Sen. Tim Kaine as her running mate in 2016, and she did go on to comfortably win his home state of Virginia. However, according to Dan Hopkins, a professor of political science at the University of Pennsylvania who has studied home-state advantage, the supposed boost isn’t all it’s cracked up to be.

“What I found is that presidential candidates used to enjoy a sizable electoral bonus in the state that they were from, but that has declined over time,” Hopkins tells Mic, saying the advantage is only worth a percentage point or two these days. “Vice presidential candidates never generated quite that much bonus, but whatever bonus they did generate is now indistinguishable from zero and maybe, on average, about half a percentage point.”

“The VP pick for Bernie, and for that matter Biden, will almost certainly be a woman."

Hopkins explains that the polarization and nationalization of party brands has diluted the home-state effect. “In a highly nationalized, politicized environment, it doesn't really matter that Mitt Romney is from Massachusetts, and in fact Mitt Romney did worse in Massachusetts [in the 2012 election] even though he had been the governor of that state, than John McCain did four years earlier,” Hopkins explains. In short, he says, “partisanship is mattering more and more,” and regional identity has fallen by the wayside. Hopkins cites Sarah Palin, McCain’s running mate in 2008, as the last VP pick in modern politics who could be demonstrably shown to have impacted a race — and it wasn’t positively. “When Sarah Palin gave her first televised interview, just days after that, sizable shares of voters started to gravitate away from the Republican ticket,” he adds.

When it comes to Sanders’s decision-making progress, he has a few different routes he could take. On the one hand, he could seek a VP who could achieve the ever-elusive goal of “unifying the party” — someone who has earned plaudits with both progresssive and centrist wings of the party, like Stacey Abrams, the 2018 candidate for Georgia governor who has often been mentioned in veepstakes commentary.

Julian Mulvey, a political strategist who worked on Sanders’s 2016 campaign, suggests that Abrams would be a "wonderful" choice. He adds, however, that "in Bernie's case, he might want to double down on a strong progressive, and a strong progressive that reinforces his message of fighting for working families, being on the side of regular folks. Someone who would fit that would be much more what you would consider” Sanders to choose, he says.

Abrams, while popular across large swathes of the Democratic Party, is not someone who has made Sanders’s specific ideological fight for goals like Medicare-for-All a key part of her identity. But as a Black woman with deep ties to the South and a high profile — she delivered the Democratic response to the State of the Union response in 2019 — without major scandal, she has many other qualities that would be attractive as a running mate.

That's probably why Biden has floated her to join his potential ticket, too. In a 2019 speech, Biden referred to Abrams as “the woman who should have been the governor of Georgia.” She could help Biden cement his popularity among African Americans, who have delivered him several resounding primary wins.

This gets at another important consideration for both candidates: identity. Jonathan Tasini, a former Sanders surrogate, told Mic in an email that “the VP pick for Bernie, and for that matter Biden, will almost certainly be a woman.” Both men, after all, are just that — men — not to mention white ones in their late 70s.

For some major Democratic politicians, though, identity concerns are less central than winning in 2020 at all costs. Clinton said on CNN that while she would “love” for a woman to be chosen, she would also urge the eventual nominee to “take a really hard look at the electoral college for what will help him.” In other words: someone who will broaden the presidential nominee’s base of support in a way that helps the candidate capture 270 electoral votes. Given that Clinton won the popular vote by 3 million votes but fell short in the electoral college, and thus in the election, perhaps her perspective makes sense.

The most obvious choice for Sanders is often said to be his former electoral rival, Elizabeth Warren. The upside is obvious — she’s a woman with a national profile, a fervent base of supporters, and the ability to help Sanders double down on his message of progressive change. She is the most senior elected official in the Democratic Party who shares his views on issues like universal health care and free college tuition, even if they quibble on the details. She could help him appeal to women and overcome the assumption that his supporters are comprised mostly of young white men who are aggressive online.

Warren, however, hasn’t endorsed Sanders yet, and it's unclear whether she might back him or Biden. “I have also been skeptical of a Sanders/Warren ticket,” Tasini says, “simply because either of them is far more likely to want to return to the Senate with enhanced power and influence rather than sit as a vice president for perhaps eight years, at which point their age will simply rule them out as a presidential candidate the next time the pParty is choosing someone.”

Warren also struggled in the primary, never placing higher than third — even in her home state of Massachusetts — which might throw doubt on the idea that she could help Sanders broaden his appeal. Still, Sanders’s campaign has clearly been considering her, evidenced by the fact that it leaked to The Intercept that it was investigating whether Sanders could choose her for both vice president and treasury secretary.

For Biden, the veepstakes carries a similar set of demands — finding someone who will help unify the party and raise enthusiasm while hopefully off-setting his unexciting status as an old white man who’s been in politics for nearly five decades.

The former vice president has floated the names of several women as possible running mates. In the same speech in 2019 where he mentioned Abrams, he also mentioned Sally Yates as a possible choice; Yates was deputy attorney general under former President Barack Obama and became a resistance hero after she stood up to President Trump early in his term and was subsequently fired. Yates, though, is not an elected official, and does not have any experience as a campaigner.

Everyone comes with a downside, though, and Abrams’s could be her relative lack of experience. “Abrams may have a bright future in national politics, but she's not there yet,” the pundit Damon Linker wrote at The Week. “She's an author, voting rights activist, former Georgia state representative, failed candidate for governor, and a celebrity of sorts among woke progressives and academics. Republicans might be willing to elevate to high office underqualified media darlings who excite certain segments of the party's voters, but Democrats should aim higher and broader than that.”

Choosing a vice president is an exercise in intense politicking.

Linker suggests someone else, someone who has yet to receive nearly as much national buzz as Abrams: Gov. Michelle Lujan Grisham of New Mexico. In 2018, Grisham was elected as the first Democratic Latina governor ever. She has a compelling, tragic backstory that pairs in a way with Biden’s — both her sister and her husband died from illness. And although she currently holds major office, choosing her won’t dilute Democrats’ national governing power in the same way as choosing a senator might. New Mexico isn’t really a swing state — Clinton carried the state by 8% — so a Democrat would have a good shot to replace Lujan Grisham in the governor’s mansion if she did join a presidential ticket. She also formerly served as New Mexico’s secretary of health, and if the country is still in the midst of a coronavirus crisis in November, that experience could go a long way.

In the end, choosing a vice president is an exercise in intense politicking. Who can balance the top of the ticket with their experience, with their background, with their expertise? And then can that person mesh well with the presidential nominee, if they do get to work together in the White House? Right now, all we can do is wonder.

More like this
Biden's idea of filibuster reform is to bring back painfully long and boring floor speeches
By Vanessa Taylor
Trump kept a Gitmo prisoner detained for 5 extra years. Biden has finally freed him
By Rafi Schwartz
Nancy Pelosi took a stand on the Jan. 6 committee, and it left Republicans whiny as hell
By Rafi Schwartz
Stay up to date