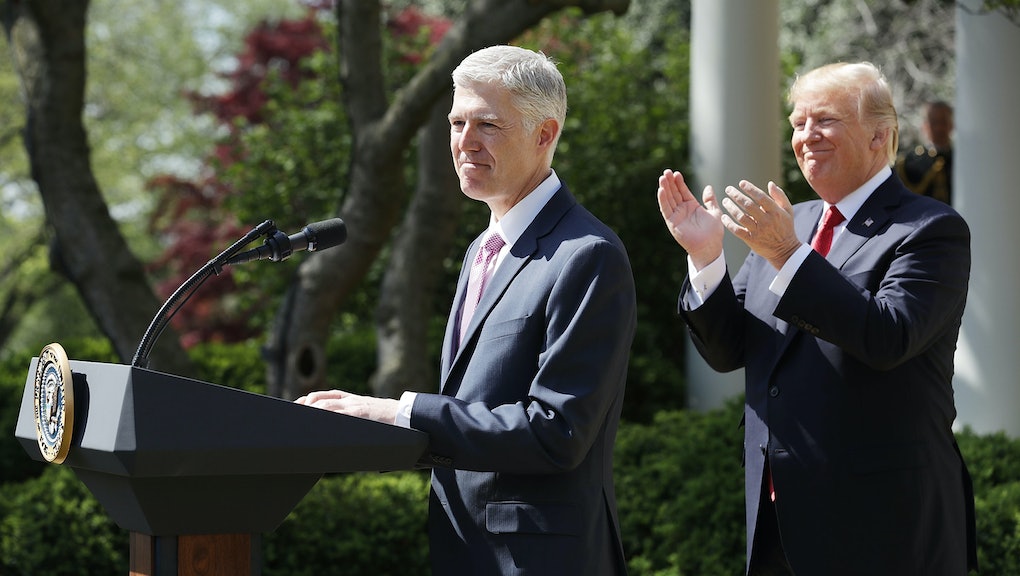 The U.S. Supreme Court recently ruled in the important and much-anticipated case, Bostock v. Clayton County, that the LGBTQ community is protected from employment discrimination.

The 6-3 ruling took many by surprise, in part because two conservative justices were in the majority, and one of them, Justice Neil Gorsuch, wrote the majority opinion.

In this transformative moment in U.S. history, when the public supports the recognition of fundamental human rights, including the right to marry the person of one’s choice, the law appears to be catching up with society. And the U.S. Supreme Court has decided cases in ways that reflect social realities.

The principles of equality and nondiscrimination are at the heart of American democratic tradition. As a public law scholar, I believe the bold decision in Bostock is consistent with a historic pattern of some justices defying expectations when faced with a major social transformation.

Instead of ruling to maintain the discriminatory status quo, they have demonstrated their commitment to these basic values of democracy by addressing historic injustices.

One classic example of a justice defying expectations to promote civil rights is Chief Justice Earl Warren, who was appointed by President Dwight Eisenhower and served on the court between 1953 and 1969.

Warren arrived at the court as a Republican with conservative credentials. He had been a proponent of President Franklin D. Roosevelt’s decision to place Japanese Americans in concentration camps.

But as a Supreme Court justice, Warren did not meet the expectation that he would bring a conservative viewpoint to decisions. Instead, he championed civil rights as chief justice.

In 1954, he wrote the landmark opinion in Brown v. Board of Education, a unanimous decision which led to desegregration of public schools by overturning an 1896 precedent and rejecting the idea that “separate but equal” was constitutional. Social science showing the psychic injury that racism caused was crucial to this outcome.

Some have speculated about Warren and his unexpected shift. His sense of guilt over his active involvement in the Japanese American incarceration was apparently influential. The notion among the legal community about Warren’s opinion in Brown v. Board of Education is that “the Japanese Americans paid the ransom to free the Blacks.”

Although Eisenhower thought Warren would be conservative in his judicial philosophy, that was hardly the case. In this and subsequent cases, what was called the “Warren court” became synonymous with a series of rulings that expanded the scope of constitutional rights.

When asked what he considered his most serious mistakes, Eisenhower replied: “They are both sitting on the court.”

He was referring to Justice Warren and Justice William Brennan, a Republican who had been on the New Jersey Supreme Court and whom Eisenhower appointed to the Supreme Court in 1956. Both judges were more liberal in their judicial philosophy than anticipated.

In these instances and others, presidents have been known to be disappointed by the decisions of those they appoint.

When justices are confronted with a new type of discrimination and are unconstrained by past precedent, they may have the ability to form coalitions on the court to advance civil rights. For instance, the advocacy campaign against sexual harassment outside of the court, aimed at addressing egregious misconduct in the workplace, appears to have exerted influence inside the court.

Even though women had experienced sexual harassment for centuries, no one had even coined a term for the phenomenon until the 1970s, when the federal government began to formulate new policies.

Policymakers recognized that sexual harassment was illegal when it took the form of coercing employees to perform sexual acts in exchange for rewards or to avoid losing their jobs or work-related benefits.

Subsequently, the Equal Employment Opportunity Commission, the federal agency with responsibility for dealing with employment discrimination, was inundated with complaints.

When the Supreme Court first considered this issue in Meritor v. Vinson in 1986, the notion was barely a decade old. Moreover, the central question was a novel one, whether an employee could sue for a different type of sexual harassment, a so-called “hostile work environment.”

In a 9-0 decision written by Chief Justice William Rehnquist — who was appointed by President Richard Nixon and elevated to chief justice by President Ronald Reagan — the court unanimously ruled that the protections in federal civil rights law did cover this type of sexual harassment.

The Meritor ruling, despite criticism of its treatment of relevant evidence and employer liability standards, was hailed as a victory for advocates of civil rights.

As with Bostock, the ruling in the Meritor decision was surprising. Conservative justices had taken a liberal position and joined liberal justices in an effort to combat egregious misconduct in the workplace. They did this by expanding the scope of discrimination on the basis of sex with the new and more expansive interpretation of sexual harassment.

Another remarkable social change in American society is the recognition of same-sex marriage, known as marriage equality. Litigation began over this issue in the late 20th century with Baehr v. Lewin (1993), in which the Hawaii Supreme Court held that the failure of a clerk to issue marriage licenses to a same-sex couple was a form of sex discrimination.

This social movement culminated in the landmark U.S. Supreme Court decision Obergefell v. Hodges in 2015. Acknowledging that the U.S. had undergone a significant social transformation in accepting diverse types of intimate relationships, the court resolved to make the law match the times.

The 5-4 decision, which held that the right to marry is fundamental and guaranteed by the Constitution, was authored by Justice Anthony Kennedy. Kennedy said he voted in favor of this position even though it did not correspond to his own Catholic religious tenets.

Kennedy said he undertook writing the landmark opinion because of his religious beliefs: “It seemed to me I couldn’t hide,” he told an interviewer. “The nature of injustice is you can’t see it in your own time,” Kennedy said. “And as I thought about it more and more, it seemed to me just wrong under the Constitution to say that over 100,000 adopted children of gay parents could not have their parents married.”

In the midst of immense social upheaval, courts and individual justices grapple with rules that must be reassessed in a new context — so it seems less surprising that justices consider carefully the meaning of equality and sex discrimination in light of the changing times.

This set of examples suggests that it may be unwise to presume that judges will vote in particular ways because of their backgrounds or judicial philosophy. Over the years, justices have felt the exigencies of the times that sometimes lead them to rule in ways that will protect the American constitutional order. Chief Justice John Roberts, expected to be more ideologically conservative in his rulings, has been praised for his role in building consensus, his temperament, and his fair-mindedness

While this certainly does not happen all the time, it may at least indicate that the U.S. political system can survive the ongoing crises of the 21st century associated with hyper-polarization. Ideological considerations, while often important in judicial decision-making, do not necessarily provide a guide to future decisions.

This article was originally published on The Conversation by Alison Dundes Renteln at the University of Southern California. Read the original article here.

More like this
Supreme Court justices' political leanings: A guide to the 2021 court
By Vanessa Taylor
Athletes have good reason to want to skip press conferences
By Nicole Kraft
Alcohol companies make 17 billion off of illegal sales each year
By David H. Jernigan
Stay up to date