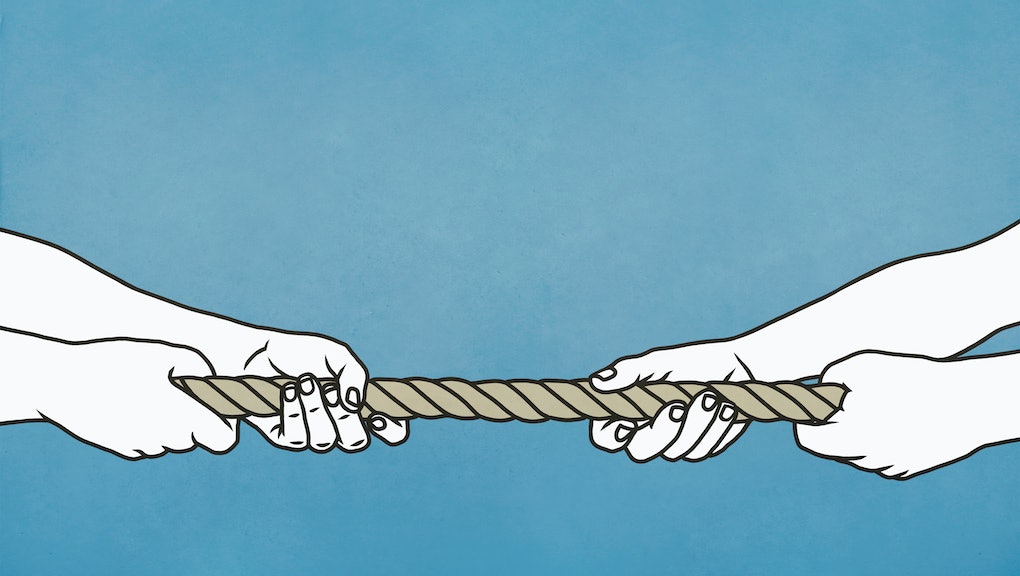 When we argue, here's what happens to our brains

We’ve all been there. You are in the middle of a heated disagreement when you lose respect for the opposing party. Whether it is about the latest election or childcare, you feel like your considered arguments are not appreciated — perhaps even ignored. But did you ever wonder what exactly is happening in the mind of the person on the other side?

In a recent study, just published in Nature Neuroscience, we and our colleagues recorded people’s brain activity during disagreements to find out.

In our experiment, we asked 21 pairs of volunteers to make financial decisions. In particular, they each had to assess the value of real estates and bet money on their assessments. The more confident they were in their assessment, the more money they wagered.

Each volunteer lay in a brain imaging scanner while performing the task so we could record their brain activity. The two scanners were separated by a glass wall, and the volunteers were able to see the assessments and bets of the other person on their screen.

When people disagreed, their brains became less sensitive to the strength of others’ opinions.

When volunteers agreed on the price of the real estate, each of them became more confident in their assessment, and they bet more money on it. That makes sense — if I agree with you then you feel more sure that you must be right. Each person’s brain activity also reflected the encoding of the confidence of their partner. In particular, activity of a brain region called the posterior medial frontal cortex, which we know is involved in cognitive dissonance, tracked the confidence of the partner. We found that the more confident one volunteer was, the more confident the partner became, and vice versa.

However — and this is the interesting part — when people disagreed, their brains became less sensitive to the strength of others’ opinions. After disagreement, the posterior medial frontal cortex could no longer track the partner’s confidence. Consequently, the opinion of the disagreeing partner had little impact on people’s conviction that they were correct, regardless of whether the disagreeing partner was very sure in their assessment or not at all.

It was not the case that the volunteers were not paying attention to their partner when they disagreed with them. We know this because we tested our volunteers’ memory of their partners’ assessments and bets. Rather, it seems that contradictory opinions were more likely to be considered categorically wrong and therefore the strength of those opinions was unimportant.

We suspect that when disagreements are about heated topics such as politics, people will be even less likely to take note of the strength of contradictory opinions.

Our findings may shed light on some puzzling recent trends in society. For instance, over the last decade, climate scientists have expressed greater confidence that climate change is man-made. Yet, a survey by the Pew research centre shows that the percentage of Republicans who believe this notion to be true has dropped over the same period of time. While there are complex, multi-layered reasons for this specific trend, it may also be related to a bias in how the strength of other people’s opinions are encoded in our brain.

The findings can also be extrapolated to political current events. Take the recent impeachment hearings against US president Donald Trump. Our study suggests that whether a witness appears “calm, confident and in command of the facts” (as government official Bill Taylor was described when testifying during the hearings) or “unsteady and uncertain” (as the FBI chief Robert Muller was described when testifying about his special counsel investigation back in July) will matter little to those who already oppose impeachment when testimonies are unsupportive of the president. But they will affect the conviction of those who are in favor of impeachment.

So how can we increase our chances of being heard by members of an opposing group? Our study lends new support to a “tried and tested recipe” (as Queen Elizabeth II recently put it while addressing a country divided over Brexit) — finding the common ground.

The strength of a carefully reasoned opinion is less likely to be registered when launching into a disagreement with a sturdy pile of evidence describing why we are right and the other side is wrong. But if we start from common ground — that is the parts of the problem we agree on — we will avoid being categorized as a “disputer” from the very beginning, making it more likely that the strength of our arguments will matter.

Take for example the attempt to alter the conviction of parents who refuse to vaccinate their children because they falsely believe vaccines are linked to autism. It has been shown that presenting strong evidence refuting the link does little to change their minds. Instead, focusing solely on the fact that vaccines protect children from potentially deadly disease — a statement that the parents can more easily agree with — can increase their intention to vaccinate their children by threefold.

So in the midst of that heated disagreement, try and remember that the key to change is often finding a shared belief or motive.

This article was originally published on The Conversation by Tali Sharot and Andreas Kappes. Read the original article here.

This article was originally published on Jan. 2, 2020

More like this
Didn’t get enough sleep? Here's how to survive the day, according to doctors
By Tracey Anne Duncan
India's failed COVID response leaves young people scouring social media for oxygen
By Urmi Bhattacheryya
What are COVID-19 escape mutants and how much do you need to worry about them?
By Melissa Pandika
Stay up to date