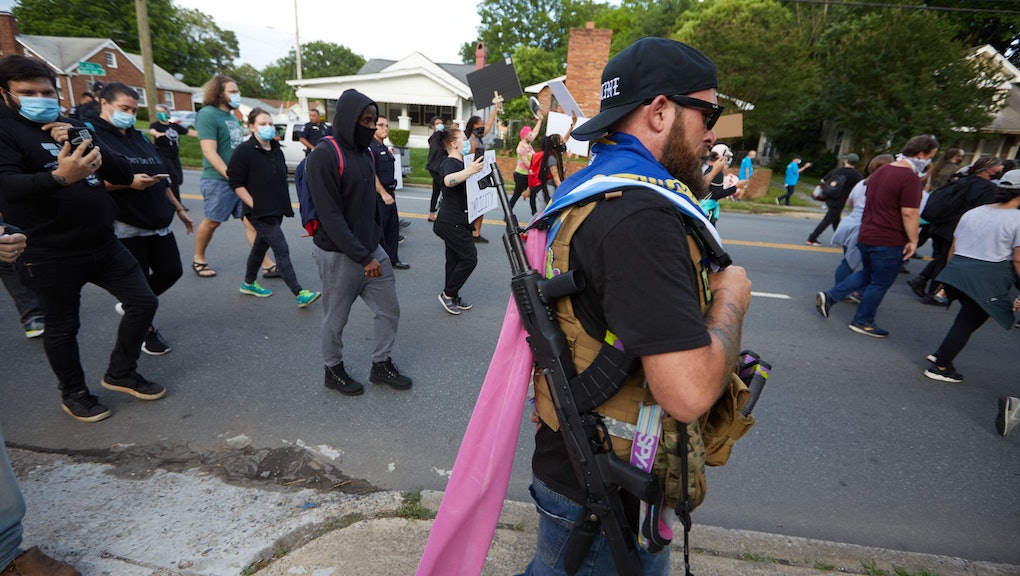 As protests about police violence among black people continue and become more widespread across the U.S., certain individuals and groups have begun to stand out — including anarchists, agitators and members of a variety of far-right groups.

With the country’s long history of racist killings, it may be confusing to think that racists and white supremacists are among those objecting to the killing of people of color.

But people affiliated with far-right groups aren’t trying to be part of the overall protest movement. Having researched these groups, we think it’s likely that they are attempting to hijack the event for their own purposes.

As researchers of street gangs and far-right groups, we see that in this case, they want to stoke a civil war between the races — one they think they can win. By antagonizing police, destroying property, or intimidating the public by adopting military gear — including weapons — these groups are attempting to instigate violence between the police, protesters and the public. Rousting law enforcement to violently retaliate against black people en masse is the first step.

The far-right is not unified by a strict ideology. It is a broad movement with various factions vying for greater amounts of attention and influence.

In spite of this tension, our research shows that many share the conspiracy belief that Western governments are corrupt and controlled by the New World Order, a cabal of wealthy Jewish elites. To them, wealthy Jewish investor and democracy advocate George Soros is the puppet master of the world economy.

William Luther Pierce’s 1978 novel “The Turner Diaries,” which has come to be known as “the bible of the racist right,” lays out a plan to instigate a race war and bring about the federal government’s collapse. The book has inspired violence from the far-right, most notably the 1995 bombing at the Alfred P. Murrah Federal Building in Oklahoma City.

“Accelerationism” – the idea that inducing chaos, provoking law enforcement, and promoting political tension will hasten the collapse of Western government – has taken root among far-right groups. One such group, the “Boogaloo Bois,” identified by their penchant for wearing Hawaiian shirts, has been observed at protests in Minnesota, Florida, Georgia, Texas, Pennsylvania, Colorado and Oregon. As with any far-right movement, “Boogaloo Bois” groups are rather unstructured and have varied beliefs, lacking any hierarchical organization.

In Las Vegas, three “Boogaloo Bois” were arrested with firearms and a plan to incite violence during George Floyd protests. Social media posts and online chat groups have also shown them attempting to infiltrate other protests across the country.

Joining the crowds provides these groups an opportunity to discredit protesters by inciting looting, rioting, violence and vandalism – which they hope will spark like-minded white Americans to resist the civil disobedience of protesters. Already, there are roving bands of armed white counterprotesters at protests across America.

Other far-right extremists are talking on social media about the protests requiring a lot of police attention and see an opportunity to engage in targeted terror attacks. Their overall intention is the same: fanning flames to burn down the federal government, making room for them to establish a whites-only country.

This article is originally published on The Conversation by Zoë Julian, Shannon Reid and Matthew Valasik. Read the original article here.

More like this
Doctors treating trans youth grapple with uncertainty, lack of training
By Stef M. Shuster
Why hearing your own voice is so difficult
By Neel Bhatt
How much sleep you need, depending on your age
By Dana McMakin
Stay up to date