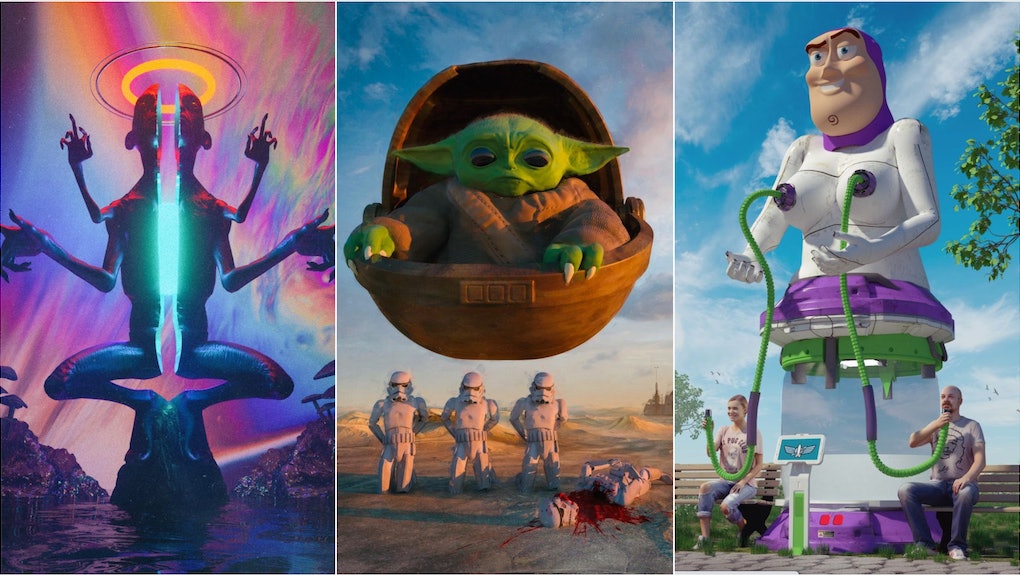 Who is Beeple, and why did his NFT just sell for $69 million?

The most-expensive NFT ever sold doesn't seem so impressive at first glance. Viewed all at once, Everydays — The First 5000 Days, a visual work by Mike Winkelmann, the digital artist known as Beeple, looks like a haphazard assemblage of colorful pixels. What could possibly make this JPG worth more money than masterpieces by Salvador Dalí and Frida Kahlo?

To start with, zoom in on the digital collage, and you’ll find that Everydays, which sold for a record $69.3 million at Christie's, is comprised of 5,000 individual images that Beeple created and shared daily for more than 13 years, as a way to practice and hone his craft. “It really is a diary of technology, my life, and the world over these last 13 years,” he told The South China Morning Post.

The self-taught digital artist had a large fan base before Thursday's landmark Christie’s auction — nearly 2 million followers on Instagram. But minting his entire opus as an NFT, or non-fungible token, conferred real value to Beeple’s surreal and often satirical interpretations of modern politics and culture.

Everydays is the first purely digital NFT sold by a major auction house. Also, for the first time in its 255-year history, Christie’s accepted the cryptocurrency Ethereum as payment. Beeple’s work was going for just under $30 million with seconds left in the sale, when a last-minute deluge of bids extended the auction by two minutes and pushed the final price above $69 million. He is now the third most-expensive living artist, after David Hockney's Portrait of an Artist (Pool with Two Figures), which sold for $90.3 million, and Jeff Koons, whose sculpture, Rabbit, sold for $91.1 million in 2019.

The NFT craze has exploded in recent weeks, meaning there’s a good chance we’re witnessing some sort of market bubble. Todd Levin, an art advisor who witnessed the auction of Leonardo da Vinci’s Salvator Mundi (the most expensive painting ever sold, at $450.3 million) at Christie’s in 2017, told The New York Times he had “mixed emotions” about the Beeple sale: “On the one hand, it’s super exciting to witness a historical inflection point. On the other hand, the amount of money involved could skew and damage a nascent emerging market.”

Still, lots of non-traditional artists have made bank lately selling digital works as NFTs. Grimes made $5.8 million on a suite of WarNymph NFTs in late February. Some jokesters quadrupled the value of a Banksy screenprint by setting it on fire and selling an NFT duplicate. Heck, Twitter founder Jack Dorsey is currently hawking his first tweet, and the highest offer is $2.5 million.

There’s something devilishly funny about Beeple’s work setting records in the fine art world. The individual artworks that comprise Everydays are often provocative and nightmarish portrayals of controversial political figures or pop-cultural icons. He told The South China Morning Post that one of his personal favorite images is a mocking depiction of North Korean dictator Kim Jong-un that shows him with the head of Pikachu, the torso of Buzz Lightyear, as well as bare breasts and lingerie.

Beeple doesn’t have ties to a traditional gallery and was totally oblivious to the existence of NFTs until last fall, when he was clued in on their popularity among cryptocurrency traders. Now that the technology has made him a multi-millionaire, there’s no going back. “People describe it as falling down a rabbit hole,” Beeple told The Wall Street Journal, “and that is quite accurate.”

More like this
Wanting to start a family motivated us to pay off $126K in a year
By Marianne Eloise
Guess how much Trump's companies made during his presidency!
By Rafi Schwartz
Is your cat mad or is that just their face? This app can help you find out
By Tracey Anne Duncan
Stay up to date