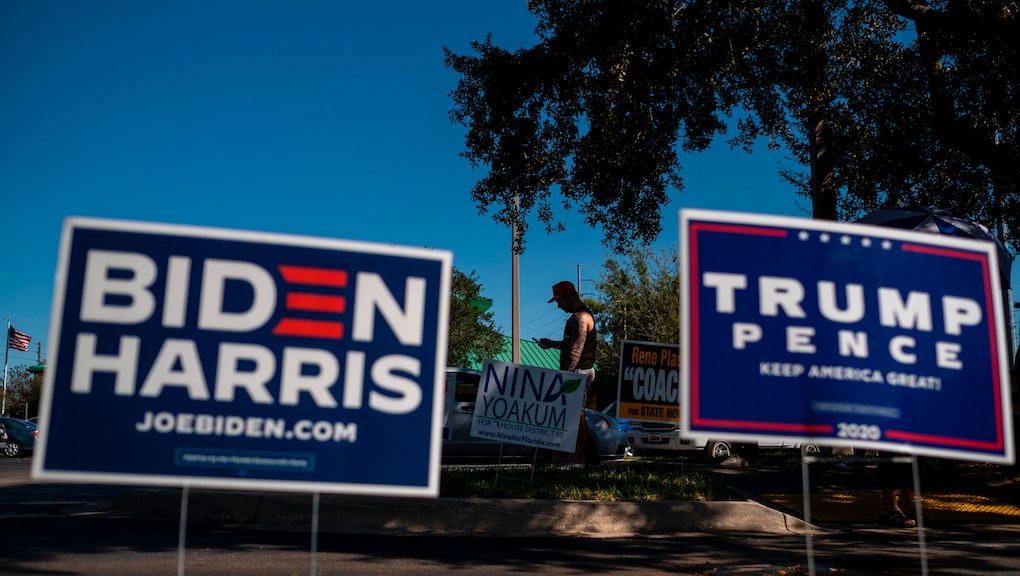 Who won the 2020 election? Here's where things stand in 7 key states

It's something of a misnomer to call this Nov. 3 "Election Day" when, in fact, people have been voting for months now. Instead, think of what happened on Tuesday as something of a culmination. With most (but not all) votes in, the focus shifts from "campaigning" to "counting" — a process complicated this year by President Trump's persistent, and transparently bogus, claim that Democrats are robbing him of a sure victory. At this point, three days after Election Day, there are still outstanding votes coming in, but it appears some key states are tipping the electoral scales toward a Biden win. Still, it's not yet official who won the 2020 election.

With votes still being counted, and data rolling in in fits and spurts, here's where things stand in the seven key states that could decide who will be our next president.

Both Fox News and the Associated Press called Arizona for Biden relatively soon after polls closed on Tuesday night — the first time the state had gone blue in nearly a quarter century. Shortly after the race was called, however, the Trump team leapt at what it called an "outlier" decision to preemptively give Biden the state's 11 electoral votes. And while neither Fox News nor AP have rescinded their call, other outlets have refrained from declaring a Biden victory in the Copper State — particularly after New York Times editor Patrick LaForge identified a data error that made it appear as if more of the state's overall votes had been counted than actually had.

By Thursday, CBS News — one of the networks which has yet to call the state — showed Biden ahead by approximately 70,000 votes, with 86% of the state reporting. As the count continued, though, Biden's lead narrowed a bit, with it standing at around 45,000 votes Friday morning. The Trump camp has been extremely focused on flipping Arizona to their column — and reportedly continuously furious at Fox News for their early call of the state.

There was a time when flipping this solidly-red state would have been unthinkable to both Democrats and Republicans alike. However, shifting demographics have made Georgia a legitimate toss-up in this year's election. As of Thursday afternoon, Biden had narrowed Trump's lead to fewer than 13,000 votes, with nearly 50,000 more still to be counted — many coming from counties in which Biden has been performing well, such as the greater Atlanta metropolitan area.

But over the course of the evening, Trump's lead steadily dwindled, with the two men within 2,000 votes by midnight. Right around dawn Friday morning, Biden took the lead in the Peach State. It hasn't been called yet — by 9:30 a.m. ET Friday, Biden's lead was just over 1,000 votes — but without winning Georgia, the Trump campaign has no path to winning 270 electoral votes. With the margins so razor-thin, Georgia's secretary of state said Friday there would likely be a recount of the state's votes, insisting: "We will get it right and we'll defend the integrity of our elections."

After handing Trump the narrowest electoral victory in state history in 2016, Michigan once again remains a harrowingly close race, with just about 60,000 votes separating Biden from Trump, with 97% of the state reporting as of Wednesday afternoon. With scores of largely mail-in ballots still being counted through much of Wednesday, the crucial state's final tally remained unclear. But CNN called Michigan and its 16 electoral votes for Biden at about 4 p.m. ET, with other networks following thereafter.

Shortly after the state was called for Biden, the Trump campaign filed a lawsuit to pause counting of the remaining ballots, arguing that a poll challenger from the northern part of the state had been barred from observing certain vote counts. By Thursday afternoon, however, Michigan Court of Claims Judge Cynthia Stephens rejected the Trump campaign's lawsuit, saying the vote count had been finished, and the suit had no basis.

After barely losing Nevada in 2016, Trump made capturing the (at least recently) reliably blue state a priority of his 2020 campaign. While votes are still being tabulated — and an accurate count of the number of mail-in ballots is complicated by the fact that the state sent absentee ballots to all eligible voters — the Trump campaign has predicted it will carry the state's six electoral votes "by a margin of 5,500 votes."

However, longtime dean of Nevada political forecasting Jon Ralston has cautioned that many of the outstanding votes are likely to fall into Biden's camp, adding to his more than 11,000-ballot lead as of Thursday afternoon. There's "no path left for Trump here," Ralston concluded. On Friday morning, Ralston added that another influx of ballots from Clark County had doubled Biden's lead to 22,000 votes, declaring: "It is over."

The perennial toss-up state remains tossed up as of Thursday, with Trump maintaining a narrow lead of just under 100,000 votes with 95% of the state reporting. Notably, North Carolina is one of the several states that will continue to accept and count ballots postmarked by Nov. 3, as long as they're delivered to election officials by the 12th. By Thursday afternoon, there were more than 150,000 mail-in and provisional ballots left to be assessed and counted. Still, Trump's lead seems stable here.

For much of the final few weeks of the campaign, Pennsylvania represented what was perhaps the most important swing state in the race. And true to form, Pennsylvania has become ground zero for the president's ongoing effort to reject what he deemed "dumps" of mail-in ballots which weren't part of the initial, in-person counts Tuesday evening.

According to CBS News, Trump's lead in the state had shrunk to just over 100,000 votes, with 92% of the state reporting by Thursday afternoon. But as more mail-in ballots came in from Philadelphia County, home to the eponymous city of Philadelphia, as well as from Allegheny County, home to Pittsburgh, Biden gained ground on Trump. The president's lead was still around 20,000 votes at the end of the night Thursday, but early Friday morning Biden pulled ahead in his home state. Around 11:30 a.m. ET, with 95% of the vote counted, NBC News put Biden's lead at just over 9,000 votes.

If Pennsylvania is officially called for Biden (some outlets have already done so, but none of the major networks have taken the plunge), the election will be over, as the state's 20 electoral votes will put Biden over the 270-vote threshold based on the states he's already been projected to win.

Reports out of Wisconsin started to look good for Biden on Wednesday morning. By the afternoon, the state's 10 electoral votes were awarded to the former vice president, with AP calling the race. State Elections Commission Administrator Meagan Wolfe declared that after all the ballots had been counted, Biden enjoyed just 20,000 more votes than Trump.

Trump won the state in 2016, and his campaign has responded by vowing to pursue a recount, saying in a statement that "there have been reports of irregularities in several Wisconsin counties which raise serious doubts about the validity of the results." However, even staunch Trump stalwart and former Republican Wisconsin Gov. Scott Walker — himself no stranger to Wisconsin political shenanigans — cast cold water on the president's recount chances, saying "20,000 [votes] is a high hurdle" for the campaign to clear. By Wednesday night, CNN's Jim Acosta said the Trump campaign was backing off the idea to pursue a recount in the Badger State.

This article was originally published on November 4, 2020