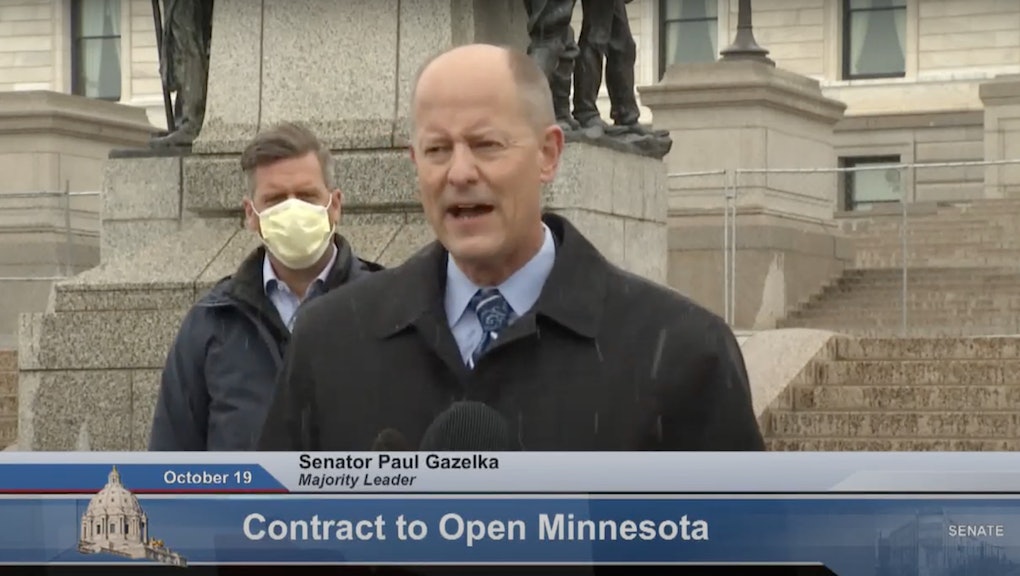 Whoops, Minnesota Republicans had an in-person event where a bunch of people got coronavirus

Ahh, hindsight. Is there anything 20/20 vision can't illuminate with the blinding light of perfect clarity, so long as it's cast backwards, rather than toward the future?

I ask because, for Minnesota Republicans — and in particular, state Senate Majority Leader Paul Gazelka — seems to believe that "hindsight" is some sort of get out of jail free card when it comes to explaining away the party's comedically disastrous handling of a recent COVID-19 outbreak among its members.

"In hindsight, we could have handled the event and our information sharing differently," Gazelka wrote in a lengthy press release responding to a series of revelations regarding the Minnesota GOP's decision to hold a number of in-person events during a massive surge in coronavirus cases in the state, including a post-election "victory party" for anywhere between 100 and 150 attendees. Shortly thereafter, at least four Republican lawmakers and multiple staffers were confirmed to have contracted coronavirus — among them, Gazelka himself. The problem, however, is that the party allegedly neglected to inform their colleagues across the aisle of the mass coronavirus outbreak within their ranks, choosing instead to alert only their fellow Republicans of the infections.

To make matters worse, Minnesota lawmakers gathered a few days later for a special legislative session, despite one party knowing about the outbreak, and the other remaining largely in the dark.

"I continue to care for patients on a regular basis,” doctor and Democratic state Sen. Matt Klein told the Star Tribune. “For their safety and my own, I demand that Sen. Gazelka tell us if any of the members or staff who attended the Nov. 12 special session with me have been tested or have experienced symptoms, and if any of those tests have been positive."

In fact, it wasn't only Democrats whom Gazelka neglected to inform about the outbreak. In a statement to Minnesota Public Radio, Gazelka admitted he hadn't notified the owners and staff of the event space where the post-election victory party was held, either — at least, not until the press had asked him about it.

"Based on your questioning, we realized we had not notified the event site," Gazelka said. "I just got off the phone with the owner and apologized for our oversight."

This, then, is the "hindsight" which prompted Gazelka to wistfully rue his own actions and inactions, despite all this occurring eight months into the coronavirus crisis in the U.S. Indeed, less than a month before Minnesota Republicans massed, contracted the virus, and then didn't tell anyone about it, Gazelka and his colleagues had unveiled a "contract to open Minnesota," during which he himself said: "We’ve now had this pandemic for nine months. Nine months of looking at the data, watching what it’s doing for our communities and how it’s affecting it."

"We know now what to do," he added, which in hindsight, is the sort of thing he probably regrets saying.