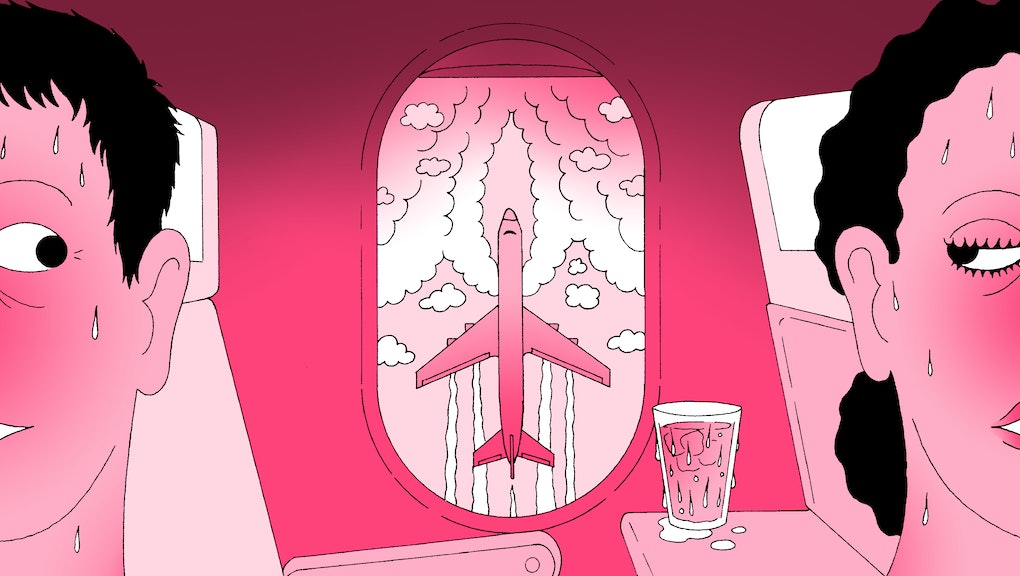 After being deprived of two of my favorite activities — travel and sex — over the past year, one thing I’m looking forward to as both become more feasible is that inexplicable wave of horniness that reliably overcomes me when I’m on a plane. Whether it’s the high I get off the recirculated air or the rumble of takeoff gearing up my own engines, something about airplanes gets me all riled up.

And while I thought I was the only one with this flight fetish, a partner confessed to me that he'd gotten all randy while flying to see me. And as I began to inquire, I discovered an entire cohort of people who got at least a little excited while mile-high.

Chris Savory, a 38-year-old management consultant in London, is clearly in the club. "All that absent-minded people-watching is excellent fuel for the imagination," he says. One 36-year-old consultant in D.C. (who, out of self-consciousness, asked that he remain anonymous) says he gets hard the moment the cabin pressure changes.

While it would be difficult and expensive to study why exactly people get all hot and bothered on aircrafts, scientists can speculate. Nicole Prause, a neuroscientist researching human sexual behavior, tells Mic that it may have to do with the vibrations of the engine. She points to research that's shown that people of all different genital configurations respond readily to vibration, including vibration at the same frequency you’d experience in airplane seats.

Another possibility is that, since people are often asleep or half-asleep on planes, their inhibitions are lowered. “As the brain approaches sleep, neural inhibition is reduced, which promotes sexual thoughts and feelings,” Prause explains. Sexual arousal is often less a result of active effort and more a result of reduced inhibition, she says.

For Shad Faruq, that checks out. “Within a few hours, I start to feel less inhibited,” says Faruq, a 26-year-old marketing professional in San Diego. “I feel more daring and open … It’s a little drunk-like, but without the slurriness.”

Even when people aren’t falling asleep, the relaxation a plane facilitates can leave some feeling primed for sex

Plus, while a plane might not be the most romantic setting, high numbers of sleeping passengers might put fliers in a sexual mindset. “Sex occurs overwhelmingly in the hours just before sleep,” Prause adds. “Simple conditioning may lead us to have sexual thoughts approaching sleep simply because that is when most people are most likely to be having sex.”

Even when people aren’t falling asleep, the relaxation a plane facilitates can leave some feeling primed for sex, says Jessica O’Reilly, a sex educator and human sexuality scholar. “With no pressure to answer emails or return phone calls while you soar through the air, it can help to put your entire body at ease; this state of relaxation coupled with the lack of distraction can help you to feel more present in your body, which can pave the way for sexual desire.”

The adrenaline rush that comes from flying can also mimic feelings of sexual excitement, leading people to misattribute it to horniness. “In some cases, it’s related to novelty and exploration, and in others, it may be related to the relinquishment of control,” says O’Reilly. “The entire flying process requires that you leave control and your own personal safety in the hands of a complete (albeit qualified) group of strangers. For some people, this can be so stressful that they have zero interest in sex, but for others, it provides just the right amount of stress to create a degree of excitement.”

The act of travel itself, whether by plane or some other mode of transportation, can bring out people’s adventurous sides, says Queen. “Travel can remove you from your ordinary routine and infuse your life with a sort of altered state that can be sexy,” she adds. Some people, for instance, may be shy in their everyday lives but feel free to let out their wild sides when they travel.

The plane itself often provides fodder for fantasy.

For Joshua McNeil, a 32-year-old program manager in Winnipeg, Canada, the arousal comes from anticipation of what will happen upon landing. “My active imagination and anticipatory feelings about seeing someone will create a heightened state of arousal via lucid sex daydreaming, where I feel like the sensuality and sexuality is actually happening,” they say. For those who are hard at work when land-bound, flights may offer a welcome reprieve where the imagination has time to roam.

The plane itself often provides fodder for fantasy. “The risk factor of doing something so naughty in a densely-packed space and potentially getting caught is such an endorphin and adrenaline rush for me,” says Pankaj Ahuja, a 33-year-old marketing consultant in India.

Justin Lehmiller, research fellow at the Kinsey Institute and author of Tell Me What You Want, has found in his research that 53% of American adults — slightly more men than women — have fantasized about sex on a plane, and 9% have this fantasy often.

“People are turned on by the idea of doing new and different things with their sex lives because we tend to grow bored easily with sexual routines,” Lehmiller tells Mic. “Fantasizing about sex in different settings is one easy way of introducing an element of newness — and what I see is that people fantasize about sex in a wide range of settings, from public restrooms to beaches and parks to cars and trucks.”

Another arousing aspect of plane sex is that it’s taboo. “Part of the appeal of sex in public or semi-public settings is the thrill that comes along with the potential risk that others might catch you in the act,” says Lehmiller. “For many people, doing something risky like this amps up their arousal and excitement.”

That said, plenty of people find flying the opposite of arousing, especially those who get anxious up in the air, says O’Reilly. And there may be good reason to have trepidation about sex on a plane: People have been arrested for joining the mile-high club (and even for just attempting to). So, indulge your airplane horniness at your own risk.