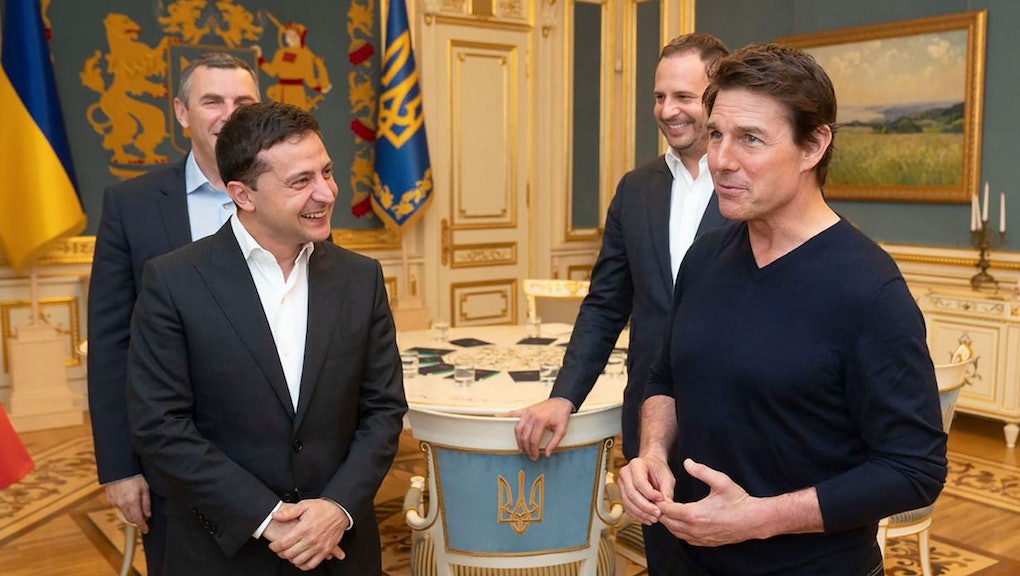 Why are Moby, Tom Cruise, and Ashton Kutcher involved in the Ukraine scandal?

As if the Trump impeachment drama couldn’t get any wilder, a bunch of celebrities keep popping up in and around the Ukraine scandal. It makes perfect sense in this alternate reality we seem to be living in.

Ukrainian president Volodymyr Zelensky met with the world’s most prolific and diminutive action hero, Tom Cruise, in New York on Monday night. After days of high-level political meetings at the UN, their summit was ostensibly to talk about the star filming a forthcoming movie in the European country. Cruise noted the cobblestones in Ukraine were very nice.

Zelensky, a former actor himself, was best known for playing a president on TV in the Ukrainian comedy show “Servant of the People” before he won office in a runaway victory in April. When he met Cruise on Monday night, Zelensky gushed, “You’re good looking. Like a movie.”

Cruise is a pro at this. “It pays the rent,” he replied.

Video clips of the meeting released by Zelensky’s office don’t include any reference the looming impeachment scandal in Washington, but at one point the Ukrainian president tells Cruise he is exhausted. “I get up and I’m tired,” he said, laughing.

It remains to be seen whether Cruise converted Zelensky to Scientology during their meeting.

In another odd case of celebrity diplomacy, Ashton Kutcher weighed in on Trump’s election meddling after he and his wife Mila Kunis also met with the Ukrainian president. “Mila and I met with President Zelenski [sic] and his wife a little over a week ago,” the actor wrote to his followers on the messaging service Community (he’s an investor in the company). Kunis, best known for starring opposite Kutcher on That 70s Show, was born in the Ukrainian SSR. Their introduction happened after a meeting of Jewish community leaders to discuss rising anti-Semitism in Ukraine. (Zelensky and Kunis are both Jewish, and he’s the country’s first Jewish president.)

After the meeting, Kutcher said Zelensky seemed like a good guy. “My gut: He is committed to eliminating corruption in Ukraine. He’s also committed to ending the war and grateful for the US financial commitment because they needed it.”

"If you like President Trump or not America is the priority soliciting foreign interference in our election is unAmerican,” Kutcher added.

Moby reportedly met Broeksmit at a dinner party in LA and was entranced by his “exploits and existential sadness,” according to the New York Times. The heir to Deutsche Bank is estranged from his family due to addiction issues and tried, unsuccessfully, to convince Schiff to pay him for the incriminating documents. He was ultimately subpoenaed by Congress.

As the whole impeachment saga unfolds, pop culture and politics will undoubtedly continue to bleed together. After all, the scandal hinges on a phone call between a reality TV star president and a leader who learned how to do his job by playing a president on TV. It’s too bad global diplomacy and the US Constitution hang in the balance, otherwise this would all be too funny.