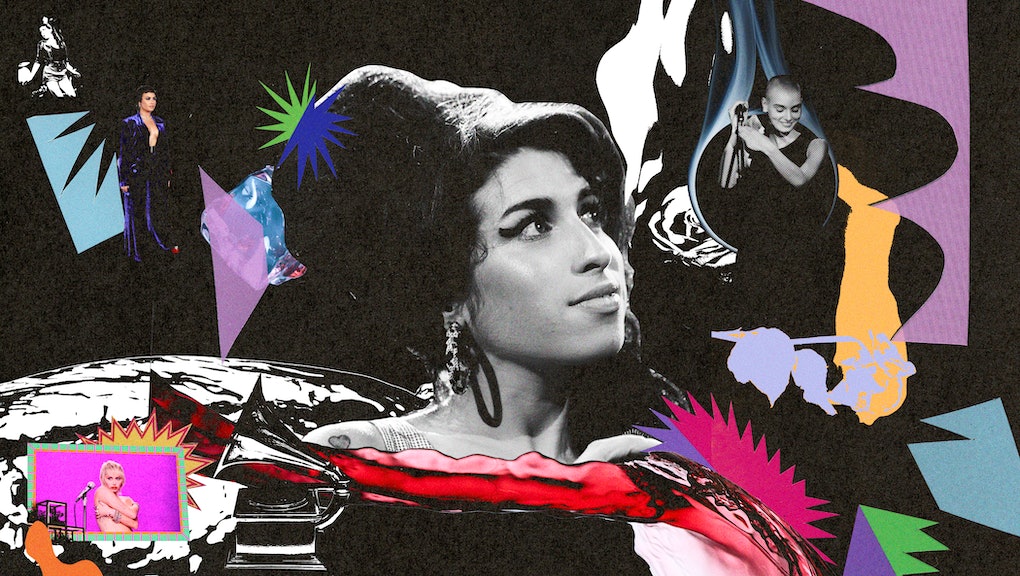 Why are we still vilifying women for their drug use?

Revered for her evocative lyricism and emotive, bluesy husk, British singer-songwriter Amy Winehouse’s musical gifts cemented her place among the early-2000s artistic elite. In 2008, she won five Grammy Awards—then a record for most wins by a female artist in one night—including Best New Artist, Record, and Song of the Year for “Rehab,” from her album Back To Black. The autobiographical track recounts Winehouse’s refusal to admit herself into a treatment facility for alcohol abuse. On July 23, 2011, Winehouse was found dead in her London home at the age of 27, a coincidental expiry age for musicians like Kurt Cobain, Jimi Hendrix, and Janis Joplin. The official cause of death was alcohol poisoning, but Winehouse also publicly struggled with drug abuse, bulimia, self-harm, and, in her own words, manic depression.

The press mocked Winehouse and her addictions in life and even in death. After the news of her passing, many publications used tasteless headlines in their remembrances (“They tried to make her go to rehab, she said No No No…Amy Winehouse dead at 27”), or sprinkled gendered buzzwords like “troubled” and “diva” in copy describing her death. ABC News used the subhead of its obituary to mention that Winehouse was booed off the stage at her last show.

When Doors’ frontman Jim Morrison died in 1971—another “member” of the 27 Club—Rolling Stone described Morrison as “a man who sang, wrote, and drank hard,” was “light on hard drugs,” and “died peacefully.” However, Morrison was an admittedly heavy drinker and reportedly used drugs for “self-realization.” Alice Cooper told VICE in 2013 that Morrison was “as self-destructive as you can imagine” and recalled an instance where he watched the musician chase “a handful of pills” with Jack Daniels. Morrison’s death is the subject of widespread speculation and conspiracy, but many claim the cause was a heroin overdose. Nevertheless, Morrison’s demons remain a footnote to his bad-boy persona. For the 50th anniversary of Morrison’s death this year, an article commemorating his legacy called him “an edgy rock icon” and made one brief mention of his affinity for alcohol.

​​“Male musicians and writers are romanticized as though their drug use is an inevitable part of their creative genius,” says Michelle McClellan, an archivist at the University of Michigan and author of Lady Lushes: Gender, Alcoholism, and Medicine in Modern America. “For both men and women, substance abuse can be incredibly destructive for themselves and their families. This division does not fall neatly along gender lines.”

Singer Demi Lovato, who has been open about their addictions, suffered a near-fatal overdose in 2018, seven years to the day after Winehouse’s death. Lovato is on the road to recovery, and they use their past experiences as teachable moments in their professional and personal lives. Yet, despite their efforts, Lovato has been publically vilified for their addictions. For instance, in response to online criticism after chiming in on internet jokes surrounding 21 Savage’s 2019 arrest for overstaying his visa, Lovato wrote on Twitter that their involvement is “no excuse to laugh at someone’s addiction, let alone their OD.” Commenters called Lovato a “crackhead,” “junkie,” and said “the spoon was hot 5 seconds before their tweet,” prompting Lovato to deactivate their Twitter account for some time soon afterward.

Nancy D. Campbell, Head of the Department of Science and Technology Studies at Rensselaer Polytechnic Institute and author of Using Women: Gender, Drug Policy, and Social Justice, explains that women are “constantly made hypervisible and spectacular in their failures,” especially when it comes to displaying behavior seen as antithetical to society’s expectations.

“The media was making me out to be crazy because I wasn’t acting like a pop star was supposed to act...You have to be a good girl,” said singer Sinead O’Connor in a recent interview with The New York Times. O’Connor has been open about her addiction to marijuana and experiences with bipolar disorder. She entered a yearlong trauma and rehabilitation program in November 2020 after becoming addicted to another unspecified drug to cope with the loss of a loved one.

The entertainment industry’s framing of male and female musicians who struggle with substance abuse mirrors how men and women are viewed in society. Campbell explains that due to women’s traditional responsibility for social reproduction and family care, those who have detectable shortcomings are seen as pariahs. The “boys will be boys” framing of male substance use and addiction adds a more dismissive lens.

In her research, Campell found that “women were mentioned [in the media] as being more stubbornly addicted or more abject in their addiction than men. Men who often used the same drugs in the same amounts were not represented in the same potent kind of social terms.”

This outdated way of thinking further translates to recovery efforts. Male musicians who are trying to kick their habits are often described as trying to get better. Rappers Mac Miller and Juice WRLD detailed their struggles with addiction in their work. After their premature, drug-related deaths in 2018 and 2019, they were praised in the media for their bravery in speaking candidly about their addiction. In a post-mortem, The New Yorker wrote that 21-year-old Juice WRLD “was working to get clean,” and that “he dueled with his demons in public so that those who do so in private could feel less alone.” Rolling Stone acknowledged that 26-year-old Mac Miller was “trying to be better,” and his career was defined by “self-improvement.”

“Is the person the victim of a disease who deserves sympathy?” McClellan asks. “Or did they do this to themselves?” With the rise of reality television and the internet in the early 2000s, people were given the chance to see women who struggle with addiction behaving badly in real-time—from Amy Winehouse’s dark relationship with the paparazzi, to Whitney Houston’s eccentric family life on the reality show, Being Bobby Brown. “The double standard here, with the balance tipping more easily toward blame in the case of women, really illuminates the persistence of our wider beliefs about how women should behave,” McClellan adds.

“We romanticize men’s self-destruction differently than we do women,” says David Herzberg, an Associate Professor of History at the University Of Buffalo and co-author of “Gender and Critical Drug Studies: An Introduction and an Invitation” alongside Campbell. In that respect, the media doesn’t always make it easy for women in recovery to move on or determine their process on their own terms.

Miley Cyrus’ 2020 cover story with Rolling Stone was meant to promote her forthcoming album Plastic Hearts. However, blogs and publications highlighted the part of the interview about Cyrus’ sobriety. She notes that she stopped doing drugs to avoid the “27 Club,” but she began drinking again due to the pandemic. In March 2021, paparazzi snapped photos of the singer taking shots, prompting headlines such as “[Miley Cyrus]: Off the wagon again?”

“For women, that shame and stigma for misbehavior cuts deep because, in some ways, men are expected to misbehave, especially when they’re young,” Herzberg says.

This issue doesn’t just affect the rich and famous. While the media amplifies these discussions, antiquated stereotypes are the root cause of the gendered perception of substance abuse. Stigma around drugs, gender, and sexuality also creates issues for how doctors perceive legal and therapeutic drugs and how women can access treatment for their addictions.

Theories of addiction, which were shaped in the early 1900s, primarily centered around the struggles of white, middle-class men. However, addiction can happen to anyone regardless of race, gender, or sexuality. Herzberg says that for a long time, many healthcare providers didn’t believe that female or gender-nonconforming patients could become addicted, and those who are can be seen as burdens on the profession.

“The way we tell stories about women’s drug use shows that women don’t actually have choices—they’re either addled by drugs, or they’re passive, foolish pawns of big Pharma,” Herzberg explains.

Herzberg says he had to undo his own prejudices regarding women’s therapeutic and illicit drug use. “People use drugs for all kinds of reasons, and some of those are very good reasons that we should respect.” McClellan adds that in addition to shame and stigma, the lack of access to care and treatment discourages women from receiving help, while Campbell notes women are often mistreated in the medical field, thus making it more challenging to ask for help. She offered a possible solution: “Medicaid expansion and mandatory coverage of drug and alcohol treatment by all health insurance” would be the best option for accessibility expansion.

The way we publicly talk about gender, drug use, and addiction could potentially change the perception of this powerful disease. Addiction is nothing to scoff at, nor something to joke about, and a person seeking recovery is something that should be celebrated.

“It all comes down to having respect for each person’s dignity, whether or not they’re currently using drugs,” Herzberg says. “When we decide someone’s drug use makes them this noun—an ‘addict’— it’s like they’re not a person anymore. We’re harming them.”

More like this
After shutting up for a minute, celebrities want everyone to listen to them again
By Brandon Yu
The moral of Nicki Minaj and the Tale of the Giant Balls? We need to explain vaccines better
By Kara Weisenstein
Nicki Minaj's cursed vaccine tweets show celeb transparency is a slippery slope
By Keith Nelson Jr.
Stay up to date