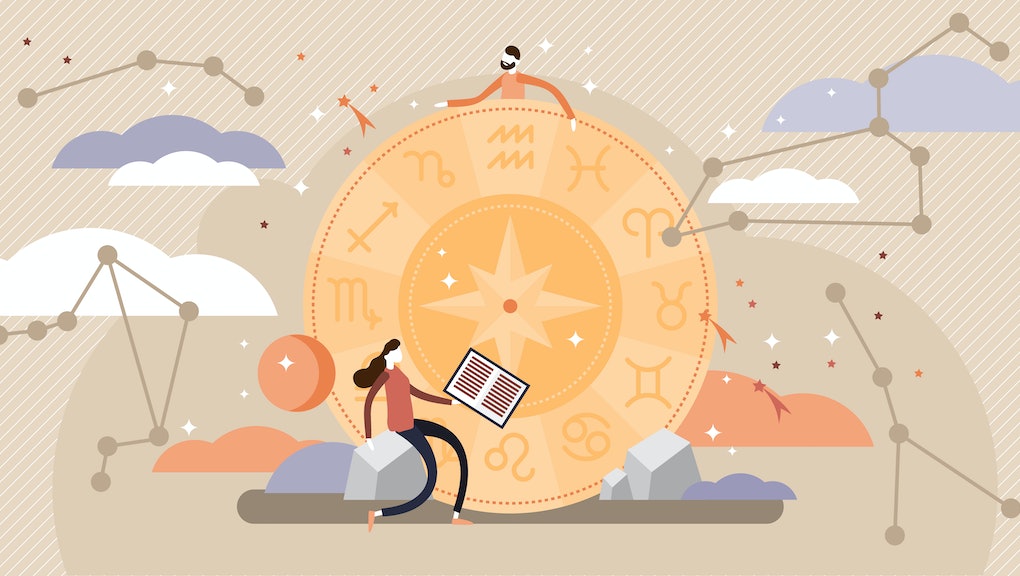 Why astrology can be a coping mechanism, according to psychologists

My sun sign is Aquarius, which, if you believe in astrology, makes me a free-spirited weirdo at heart — but you probably wouldn’t guess as much upon first meeting me. Initially, I come across as shy and guarded, so I’ve been told, which I’m not especially proud of. But lately, as I’ve learned more about my rising sign — which is supposedly how I present myself — I’ve become more forgiving of these traits. Astrology says that, as a Cancer rising, I take longer than most to feel out situations. While it may not be grounded in science, astrology can be a coping mechanism of sorts since this insight is comforting. It reminds me to accept my excessive cautiousness as part of who I am; it's just something I need to continue working on.

And I’m far from the only one into cosmic navel-gazing. Not All Geminis, Trashbag Astrology, and other Instagram meme accounts boast up to hundreds of thousands of followers. Apps like The Pattern and Co-Star are also hugely popular, and Spotify releases monthly playlists for each zodiac sign.

A bunch of outlets have mused about why astrology is having a moment right now, especially among millennials. Recently, NBC News ran an op-ed about how astrology doesn’t need to be rooted in science to be empowering. As a former lab rat and fan of everything that can be proven by research and data, I agree. Whether it’s factually true is beside the point. For me, and many others, it’s a way to cope, especially in times of uncertainty. According to the psychologists I interviewed, it can provide us with a framework for making sense of our lives, and remind us that life is in constant flux — and all difficulties are temporary — which is not unlike what therapy aims to do.

Astrology can offer a fun, not-so-intimidating pathway into conversations and other scenarios that feel uncomfortable or impossible.

That’s not to say astrology can replace the intensive inner work that happens in behavioral therapy, but it certainly can complement it. “Especially with millennials, it’s another way to engage in self-care when they’re not doing therapy,” says Ariel Hirsch, a Los Angeles-based licensed marriage and family therapist.

Hirsch and other psychologists note that astrology can offer a useful starting point for understanding the people and experiences in our lives. Andrea Liner, a Denver-based psychologist, likens it to the flashlight on your phone: “It’s not going to do much for you, but you can at least find the door with it.”

One way astrology can do this is by providing language we can use to more comfortably discuss relationships and other uncomfortable subjects. For instance, if dating Taureans always ends in flames for you, you might owe it to their stubbornness and conclude you’d prefer a partner who’s more willing to compromise, says Aimee Daramus, a Chicago-based clinical psychologist. In this way, astrology can serve as a bridge that helps you state what you want in a relationship.

Likewise, Hirsch's clients sometimes refer to their Saturn return, or when Saturn enters the astrological sign it occupied when they were born, which happens around every 30 years. If you believe in astrology, it marks a rite of passage into adulthood. Framing your emotional growing pains in terms that you feel comfortable with —or that simply shifts the focus away from earthly burdens, quite honestly — might make it easier for you to talk about them.

Especially when it comes to other people, whose behavior we can’t control, astrology can keep us from spiraling into self-blame and bring a sense of peace. “It makes it external so that it’s not about you,” says Tess Brigham, a marriage and family therapist in San Francisco. In other words, your relationship with the Taurean ended because their stubbornness clashed with your open-mindedness, not because you're a colossal screw-up. And while we all need to work on ourselves, a bit of cosmic comfort can go a long way when dusting ourselves off after a fall.

Even though they're not psychology-based, my astrological beliefs have helped me self-soothe in this way and open doors to new insights about my romantic relationship. For instance, my knee-jerk reaction to my partner's initial hesitation to move in together was to assume he wasn’t as committed as I was. But according to astrology, his Taurus sun makes him resistant to change. Whether or not this is actually true, it encouraged me to consider other explanations for my partner's reservations about living together and gave me an entryway into our conversations about the subject later on.

Even though they're not psychology-based, my astrological beliefs have helped me self-soothe in this way and open doors to new insights about my romantic relationship.

In the same vein, astrology has helped me recognize and manage my shortcomings, without beating myself up over them, like how I’ve used my rising sign to deal with my shyness. For me, the key has been to not only accept them, but view them as within my power to change.

Other astrology content might include reminders to take better care of yourself. Liner’s clients have heeded horoscopes that urged them to take stock of their relationships and end those that no longer serve them, in preparation for the following year. “It motivated them to make changes in their life they needed to make anyway,” she says.

Hirsch adds that astrology can help us tap into our resilience during tough times. Indeed, astrology is founded on the notion that the heavens are always shifting; you might’ve bombed your presentation and fought with your partner, but maybe the tide will turn once Mercury exits retrograde next week. “It’s a reminder that those cycles come to an end,” Hirsch says.

As with any coping mechanism, though, astrology can veer into unhealthy territory. While it can provide comfort and spur us to take necessary action, it’s also easy to use as a crutch, following advice without considering whether it makes sense for our lives right now, or writing people off prematurely (say, because our sun signs aren’t compatible), Liner says. “I just want to make sure people are thinking critically about it before they make any decision,” Hirsch tells Mic.

Otherwise, like therapy, astrology can be a means to understanding ourselves and how we fit into the world, she says. “Humans really like to have explanations for things,” Liner adds. “We like to know what’s coming next.” Amid all the uncertainties in life, astrology can offer a fun, not-so-intimidating pathway into conversations and other scenarios that feel uncomfortable or impossible.

This article was originally published on Jan. 10, 2020

More like this
How to sleep on a plane, according to a doctor
By Melissa Pandika
Here’s who might need a COVID-19 booster ASAP, according to Dr. Fauci
By Tracey Anne Duncan
No, the COVID-19 vaccine doesn't mess with your fertility. But COVID-19 can
By Ranjith Ramasamy
Stay up to date