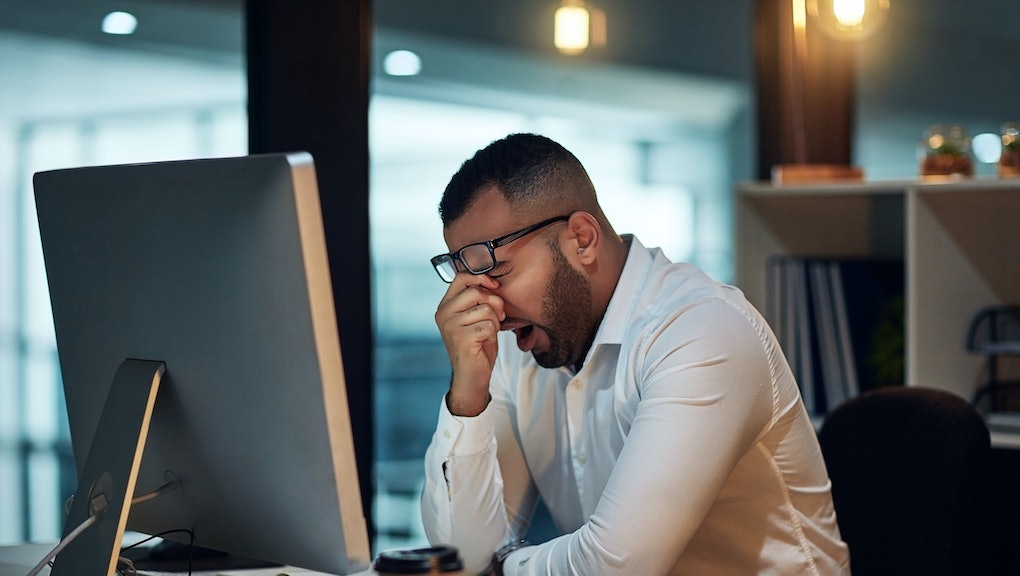 Why "catching up on sleep" doesn't work

If you’re like me, you probably sleep little on weeknights and try to make up the deficit on weekends, unfettered from a looming work schedule, so you can awaken bright-eyed and eager to carpe the diem. But perhaps, also like me, you actually awaken from this long-awaited slumber a sluggish blob. Why do you still feel groggy after catching up on sleep? Sleep experts helped me break down this frustrating scenario.

First, a sleep science crash course: You complete four stages of sleep —stages 1, 2, and 3, followed by rapid eye movement (REM) sleep — many times a night, per the National Institute of Neurological Disorders and Stroke. Stages 1 and 2 involve light sleep, while stage 3 involves deep, restorative sleep. You dream primarily during the REM phase of sleep.

When you deprive yourself of sleep during the workweek, you accumulate sleep debt, says Xue Ming, a professor of neurology at the Rutgers New Jersey Medical School, with an expertise in sleep disorders. And when you repay that debt on Friday night, you spend more time than usual in REM sleep, a phenomenon known as REM rebound. Remember that dreaming happens mostly during REM sleep — so “on that first night, you catch up on dream sleep,” Ming explains. In other words, you might have a lot of dreams. That’s been my experience: The night after a long stretch of sleep deprivation tends to be filled with vivid dreams.

Meanwhile, you spend only a little time in stage 3, or deep sleep. REM sleep is good for you — it’s when your brain is believed to remove "toxins" and consolidate memories — but it doesn’t leave you feeling rested quite the way deep sleep does, which may explain why you still feel sluggish after sleeping in on Saturday. You’ll likely spend more of Saturday night in deep sleep and awaken actually refreshed on Sunday. If you’re still tired after sleeping in on Sunday, you’re probably in deeper sleep debt than you thought, and therefore still spent a lot of time in REM sleep and not much time in deep sleep.

Sleep inertia — grogginess and impaired cognitive performance, which you feel most acutely within a few minutes of awakening — might also be to blame, says Sara Benjamin, an instructor of neurology at Johns Hopkins Medicine, who also specializes in sleep disorders. A particularly long night of sleep can make you experience more sleep inertia than usual, which could further contribute to your mental haze when you awaken from a snooze marathon.

As convenient as it might seem to save sleep for the weekend, “most people feel their best if they can stay on a set sleep/wake schedule,” Benjamin says. “The most important part of this is maintaining a set wake up time throughout the week”— weeknights and weekend nights.

The take-home message: Even if you still wake up in a stupor after sleeping in on Saturday, you might very well awaken rejuvenated on Sunday. As much as you can, try to follow a regular sleep schedule to avoid this annoying situation in the first place.

This article was originally published on Aug. 29, 2020

More like this
What is an e-bike and should I get one?
By Caroline Shannon-Karasik
How to sleep on a plane, according to a doctor
By Melissa Pandika
Castor oil for hair growth: Does it actually work?
By Melissa Pandika
Stay up to date