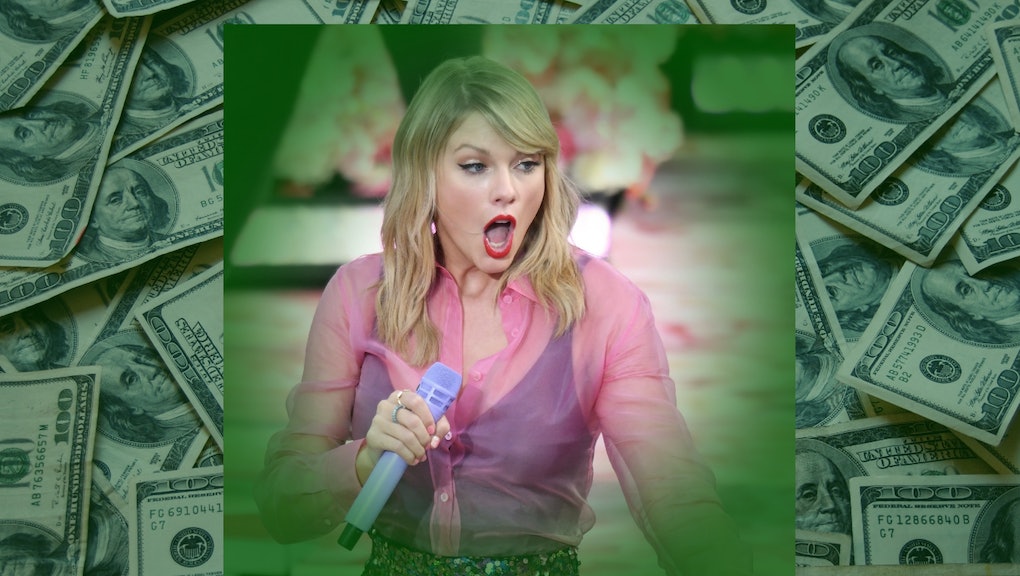 Why concert tickets have gotten so expensive

It’s way more expensive to buy concert tickets today than it was just a couple of decades ago, and we mostly have the internet to thank. Before the streaming age, artists raked in the bulk of their money from album sales. But nowadays if you take a look at the revenue breakdown for the world’s highest-paid musicians, you’ll see that the vast majority of their wealth comes from touring.

Billboard publishes its Money Makers list every year, chronicling the highest-paid acts in the world. Taylor Swift made the most money in 2018,, bringing in $99.6 million in the year — and $90.5 million of that was from touring. U2 topped the list the year prior, making $54.4 million in 2017 — with $52 million of the band’s take-home pay coming from its Joshua Tree tour.

According to the researcher Pollstar, the average price of a ticket to the most popular tours has nearly quadrupled since 1996, up from $25.81 to $91.86 nowadays. Bloomberg reported that as piracy eroded music sales in the 90s, artists began leaning more heavily on touring to bridge the gap — not a hard thing to do if you’re a star like Swift or Beyoncé, and can make more money from a couple of tour dates than you can from a year of album sales. Sellers like Ticketmaster also realized they could implement variable pricing for concerts — kind of like plane tickets, which fluctuate based on demand — and fans would still shell out to see a beloved act.

Streaming also democratized the music listening process, enabling artists to reach more potential fans. In return, the touring economy ballooned — fostering the sort of environment that makes buying nosebleed seats to see Lizzo at Radio City Music Hall cost about as much as orchestra seats to Hamilton on Broadway. Some people even pay thousands of dollars for one-on-one interactions, like backstage meet-and-greets. According to Bloomberg, Beyoncé and Jay-Z charged nearly $2,000 for some VIP experiences on their “On the Run II” tour.

Most of the revenue musicians make from tour gigs comes from tickets — not merch or VIP access. That means despite concert prices that far outpace inflation, tons of fans are still willing to show up and pull out their wallets.

Some are even happy to devote a significant amount of their wealth to an artist if it means getting to see them perform live again and again. Bloomberg profiled Pink super fan Bex Paul, who has seen the singer in concert 11 times in 2019, spending more than $7,300 total for tickets, travel, and food. Paul and her girlfriend had saved for their Pink spree for five years.

There are some artists trying to curb inflated concert ticket prices, mostly for the sake of their fans. On August 7, Ed Sheeran broke the record for highest-grossing tour of all time, beating out U2 for the title. His “Divide Tour” has grossed more than $736.7 million, all while charging less than $100 a ticket. But that tradeoff has a cost, and it’s one the artist has to shoulder. Sheeran stayed on tour for more than two and a half years before breaking the record. U2 made that amount in 110 performances; for Sheeran, it took 255.

A musician is their own most valuable asset. If their voice wears out or they break a hip from all the speaker-jumping, their career is handicapped — or finished, perhaps. By the same coin, the current music economy demands that they work harder, tour more, and generally wring their bodies out to exhaustion. A somber examination of music and the opioid crisis by Rolling Stone pointed to the grueling demands of constant touring and performing as a probable cause for the painkiller addictions that later killed Prince and Tom Petty. “We’re all older, and people are starting to have carpal tunnel and injuries from playing. It’s very difficult to not take pain meds,” Bonnie Raitt said in the Rolling Stone piece.

Unless you’re a concert promoter or a Beyoncé-caliber star, the revenue imbalance between streamed or purchased music and live performances isn’t benefiting anyone. “The superfans are not superrich fans,” Paul, the Pink fan, pointed out.

Cheap or free music in the streaming age means fans pay the difference when they want to see their favorite artists IRL. And even the stars making the most from touring will likely pay for it down the line. Just ask Adele, who canceled her 2017 tour due to damaged vocal cords and hinted it could be her last. I’m not an Adele superfan, but I’d argue no amount of tour revenue is worth risking that hyper-talented woman’s ability to sing.