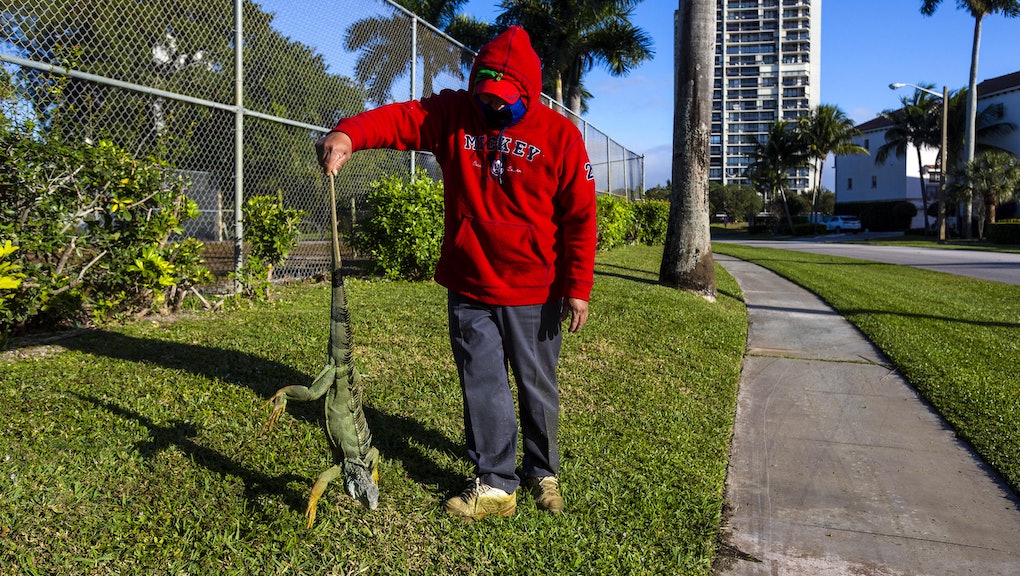 Why do iguanas freeze in the winter?

Iguanas falling out of trees aren't a sign of the apocalypse, but their stiff bodies could be a sign of cold temperatures. From Tuesday night to Wednesday morning, residents of Florida got to see these cold-blooded, frozen iguanas dropping out of trees or lying on the ground as the temperatures dropped overnight. The iguanas were completely helpless as their bodies froze during their sleep in the trees. As their grip loosened, they fell out of the branches and remained seemingly dead on the ground until warmer afternoon temperatures gradually thawed them out.

The iguanas froze because they're cold-blooded reptiles that can't regulate their body temperatures on their own. In scientific terms, this means they're ectotherms; a warm environment will keep them warm, and a cold one will make them cold. While many native, cold-blooded creatures have evolved adaptations to cope with sudden cold snaps, iguanas lack that development due to being an invasive species. If they're frozen for too long, they can still die.

Part of the reason iguanas are so susceptible to Florida's temperature swings is that they're an invasive pest in the state. Originally from Central America and parts of the Caribbean, these creatures first appeared in Florida in the 1960s and have wrecked havoc on the local environment ever since. They destroy gardens, dig beneath sidewalks (which causes them to collapse), eat endangered species native to Florida, and leave poop everywhere. They're such a problem that Florida officials encourage residents to safely exterminate them if they're found on private property. The residents seem to take this to heart; during the freeze, the Miami Herald observed an increase in iguana meat for sale on online markets.

Frozen iguanas are but one quirky, reptile-related sight to see during wintertime. In North Carolina, at the Shallotte River Swamp Park, alligators have been spotted sticking the tip of their noses out of frozen ponds. According to LiveScience, their exposed noses help the gators breathe as the rest of their bodies slow down in the cold — a condition similar to hibernation called brumation. During this time, they consume less energy and can go without food for months, but they don't lose awareness the way an animal does while hibernating.

The sight of alligator noses sticking out of the ice can be either cute or creepy depending on who you ask. (I'm on Team Cute.) But where the behavior comes from is still a mystery to researchers. In a comment to the Washington Post, Adam E. Rosenblatt, a biology professor at the University of North Florida, explained that "the behavior [...] is likely not something the alligators learned by practicing but, rather, is instinctual, something developed over time through natural selection."

“If the alligator species has been living in cold temperatures for a long enough time, then the ones who were able to do this are the ones that would be able to survive and reproduce,” he told the publication. “How they knew how to do it? I don’t think anybody knows the answer at this point.”

Like the iguanas, once the surface of the frozen pond has melted, the alligators return to normal, basking in the sun to get warm again.

All right, then, what about frogs? They're amphibians, not reptiles, but they're ectotherms, too. They need a warm place to stay warm. So how can certain frogs survive in places like Alaska?

But, by springtime, the frozen frogs slowly return to life. Unlike most creatures, including humans, the wood frogs' cells aren't damaged by these extended periods of freezing. These frogs have adapted a means to produce glucose to protect their cells and keep them hydrated.

Not all adaptations are as sci-fi as the frogs' natural cryogenic hibernation, though. Here's three words: Butt-breathing turtles.

Some turtles have a big problem when they're in their frozen ponds. They need oxygen to breathe, like alligators, but they don't stick out their noses out the ice the way gators do. Instead, they get oxygen in a different way to survive beneath a frozen surface that can last as long as 100 days.

This method of survival combines hibernation and a process called 'cloacal respiration.' While hibernating, turtles can slow down their metabolic processes and reduce the amount of energy and oxygen they need. Then, their bodies take oxygen from water by running it through areas that have a lot of blood vessels. Their butts, in other words. The turtles run water through their butts and absorb the oxygen, keeping them alive during their underwater, winter hibernation.

It's a necessary adaptation. Underwater hibernation during winter is better for the turtles because the temperatures are more stable, wrote Jackie Litzgus, a biology professor for Laurentian University. Once winter has passed, the turtles return to the surface to warm up their stiff muscles with a bit of sunbathing.

Nature sure has a weird way of adapting to things, but you can't deny that it works. Perhaps, someday, Florida's iguanas will figure out a cooler way to adjust to their cold snaps, too. Or people can invent iguana-proof umbrellas, either one sounds good.

More like this
Heat waves are killing baby birds by forcing them to flee their nests before they can fly
By AJ Dellinger
Amid daily reports of catastrophe, Americans are finally starting to realize climate change is bad
By AJ Dellinger
Much of the American West is on fire. Again
By Vanessa Taylor
Stay up to date