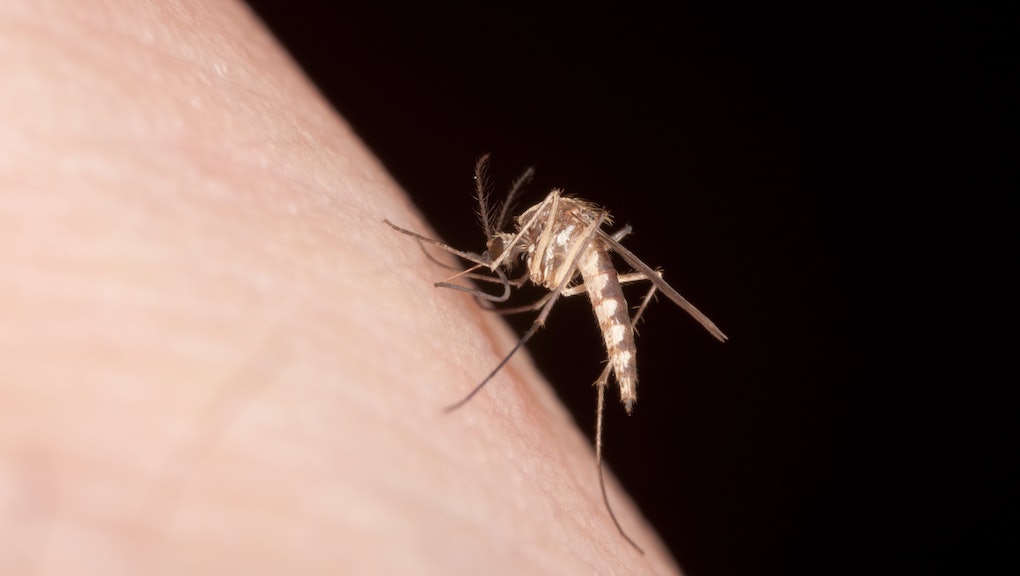 Why do mosquitoes bite some people more than others? Scientists weigh in

As I write this, my legs are covered in mosquito bites, while my partner, who I’ve quarantined with all summer, has hardly any. While I wouldn’t wish my incessant itching upon him, I can’t help but feel a little salty. I've long had this theory that mosquitoes find me especially appetizing, based on my (totally scientific, not resentful) observation that they tend to devour me and leave whoever I’m with largely unscathed. But are mosquitoes really attracted to some people more than others? And if so, why?

It turns out that there is some truth to my theory about some people being more susceptible to mosquito bites. “I was skeptical until I started studying this myself in the lab,” says Maria Elena De Obaldia, a research associate who studies host-seeking behavior in mosquitoes in the Laboratory of Neurogenetics and Behavior at Rockefeller University. “Now I’m absolutely convinced that it’s true.”

Before we sift through the evidence, a little science behind why mosquitoes bite: Only females bite, since they need a blood meal to lay eggs, and they rely on their sense of smell to find us, explains Christopher Potter, associate professor of neuroscience at Johns Hopkins School of Medicine. None of us smell completely repulsive to them, but some of us do smell better to them than others. It’s not unlike choosing between hummus and pizza, De Obaldia says — she’d probably pick pizza, but would go for hummus if it were the only option, and she was hungry.

She’s seen evidence of this decision making process in experiments conducted in her lab in which human volunteers wear a nylon stocking on their forearm for six hours, which she and her team then expose to mosquitoes using a tube apparatus. Pretty much across the board, mosquitoes prefer worn nylons to unworn nylons. But when De Obaldia and her team expose mosquitoes to nylons worn by two different people, they sometimes gravitate to one nylon more than the other. Their findings are consistent with a 2006 study that also showed that odor plays a role in attractiveness to mosquitoes.

What makes us smell more or less attractive to mosquitoes isn’t entirely clear, though. A plethora of odors waft from our body, the result of our own secretions, as well as their metabolism by the bacteria and fungus dwelling on us, Potter tells me. To figure out which odors on our skin mosquitoes prefer, scientists can use a special technique to identify them, and then test the attractiveness of each one. The main attractants on human skin that scientists know of include lactic acid, ammonia, fatty acids, and 1-octen-3-ol (found in human breath).

“But the mosquito might be using the whole blend as an attractive source,” Potter says. Sure, she might be pretty attracted to odor A, but maybe it’s the combination of odors A, B, C, and D that really allure her. The concentration of each of those odors might affect attractiveness, too. Like a perfumer, a mosquito may be picking up on a precise blend. And “there’s the question of whether some people are giving off more odors to mosquitoes than others,” De Obaldia says.

Genetics, diet and/or the microbes inhabiting our body (a.k.a., the microbiome), might play a role in body odor — indeed, a 2014 study found identical twins to be equally attractive to mosquitoes, pointing to a genetic basis for odor differences — but we can’t say for sure yet, De Obaldia notes.

It’s also possible that we think we’re more attractive to mosquitoes when really, we just have a strong reaction to their bites, Potter points out. Indeed, as-yet unpublished findings by De Obaldia and colleagues found that some people’s self reports of being more attractive to mosquitoes didn’t hold up in odor tests in the lab, possibly because they mistook their bite reaction for attractiveness. Likewise, a 2017 study correlated self-reported attractiveness to mosquitoes, bite size, and itchiness to genes that predispose someone to a bad itch response.

Booze might also make mosquitoes think you’re a snack. “It helps to flush your skin so you’re slightly warmer,” Potter says. From a distance, your odors draw them toward you, but once they get really close, your body heat does. Warmth not only attracts mosquitoes, it increases the amount of odors emanating from your skin, making you even more enticing. Children and pregnant women also tend to get bitten more, probably due to their higher body temperatures and/or more attractive odors.

To minimize your risk of getting bitten, Potter suggests applying insect repellent. He notes that DEET is effective and fairly safe, but if you don’t feel comfortable using it, you could opt for alternatives like picaridin or oil of lemon eucalyptus. Stay indoors at the beginning and end of the day, when mosquitoes tend to come out, and avoid areas near standing water, which females need to lay their eggs. An electric fan can help ward them off, too. “Mosquitoes are not really good fliers,” Potter says, so even a slight breeze can prevent them from landing on you.

Unless I participate in a controlled lab experiment, I may never know whether I smell irresistible to mosquitoes or have a strong reaction to their bites. At least now I have more clarity — and know to sip my post-dinner glass of wine indoors tonight.

More like this
Having a bad trip? This hotline can help you find your chill
By Melissa Pandika
Ancestral healing could be key to decolonizing therapy
By Melissa Pandika
SAMe supplements and depression: Can they really help?
By Tracey Anne Duncan
Stay up to date