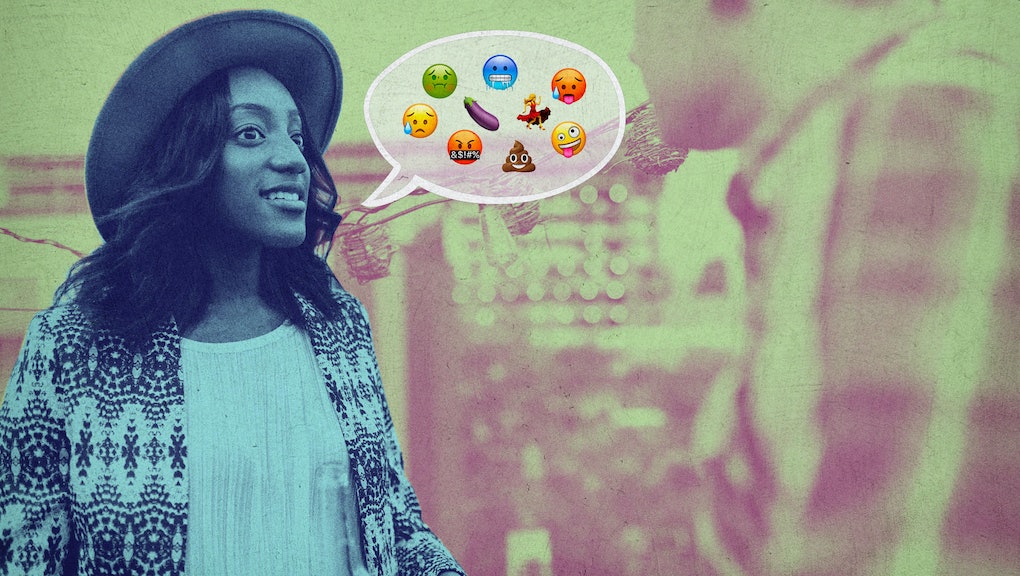 Why do people overshare? The psychology behind revealing personal details

You know how it goes: you meet a stranger at a party, and 10 seconds after the conversation starts, she's deep into a very personal and very detailed story about how she just caught her boyfriend cheating on her or the stressor at work that's causing her to go to therapy. It doesn't seem to matter to her that you just met — she’s more than happy to reveal the most intimate details of her life. It's a classic case of oversharing, but why do some people overshare so much more than others — and not have any clue that it might be making everyone else uncomfortable?

“When people overshare, they are often desiring very much to connect with someone,” Carolyn Cole, licensed marriage and family therapist, tells Mic. Dr. Gary Brown, a relationship therapist in Los Angeles, echoes this, explaining to Mic that “anxiety can be a big driver among people who tell-all, as well as feeling lonely and needing to connect with others."

Often, oversharing is an unconscious act — "many times," says Cole, people "don’t realize it until after the fact” that they've just spilled major details about their personal lives. Yet sometimes, oversharers become aware of their behavior midway through the conversation, and suddenly find themselves feeling vulnerable for revealing too much info — or, in some cases, they are aware the entire time that they're oversharing, but don’t see it as problematic.

If someone comes from a family of “talkers” where oversharing is the norm, they may echo this behavior in their day-to-day life, Dr. Brown adds. “Or," he continues, "a person may do it out of feeling generally inadequate or if they’re a narcissist — they need to share everything that comes to mind to make sure they’re heard.”

The reasons why people overshare may vary, but the act is universal. According to ScienceDaily, researchers from The University of Edinburgh and Northwestern University in Illinois found that the risk of oversharing in conversation actually increases as people age. When testing 100 people from 17 to 84 years old on their attention skills, the researchers discovered that the older subjects provided listeners with more irrelevant details than their younger peers. As this behavior can be dangerous — older people might accidentally reveal private info to strangers looking to take advantage — this finding is essential in helping "design targeted training that helps older adults improve these skills and avoid embarrassing and potential risky communicative errors,” said lead researcher Madeleine Long, of the University of Edinburgh’s School of Philosophy, Psychology and Language Sciences.

Of course, accidentally giving a telemarketer your kids’ names versus talking to near-strangers about your personal problems are two very different types of oversharing, and most of us deal more frequently with the latter. In general, though, what constitutes revealing too much is truly subjective.

“Much of what determines ‘what is oversharing’ and ‘what is healthy self-disclosure’ is likely in the eyes of the person who is on the receiving end of what’s being shared,” says Dr. Brown. A woman telling three different people details about her sex life, for instance, might get three very different reactions. One person might find it TMI, another might see the disclosure as normal, and the third might actually want to hear more. The definition of oversharing, says Dr. Brown, boils down to individual comfort levels.

Beverly, 30, is a self-proclaimed oversharer, telling Mic that she routinely shares intimate details of her first dates with friends — even, and especially, the cringe-y moments that many people might normally avoid revealing. “I do so in an effort to inspire and help others, without any fear or judgment,” she explains. Still, she tries to be cognizant of how her sharing is received by those around her. “If others are ever seemingly uncomfortable with these shares or topics, I tend to pivot conversations and maintain a level of self-awareness,” says Beverly.

Yet as the experts above point out, not everyone who overshares has the self-awareness to stop themselves when needed. Tina, 32, tells Mic that while she describes herself as an "extrovert" who doesn't think "divulging personal stories to people is a big deal." In fact, she says, "I think it’s a good way to bond with others, especially those I don’t know very well.”

It wasn't until a friend had an uncomfortable reaction to some details Tina gave about her family that she realized not everyone is OK with that kind of behavior. “I honestly had no idea it bothered anybody,” she says. “It’s good to know, and I guess I’ll be more aware of how people are reacting as I talk to them. But I’m a talker by nature, so that probably won’t change.”

The ways people overshare vary; while some only do it in person, others take more comfort in revealing details online — say, writing about their marriage troubles in a Facebook post, or tweeting quotes from the fight they just had with their mom. “These days, we see more people sharing more of themselves and things we used to consider private,” Dr. Suzana E. Flores, clinical psychologist and author of Facehooked: How Facebook Affects Our Emotions, Relationships, and Lives, tells Mic. “Some social media users use their pages as their personal journals, sharing their every thought with the world.”

Because of the ubiquity of smartphones, Dr. Flores explains, it's easier than ever for people to spread information, whether or not their followers want it. “Mobile devices have changed our culture and our comfort level with oversharing,” she says. “If a tweet doesn’t have an audience, is it still a tweet? When it comes to our digital connections, our friends are no longer our friends — they are our audience.”

With this notion in mind, Dr. Flores says it’s important to ask yourself before posting something personal, “What purpose does it serve?” She also suggests thinking about what will happen if you don’t post about the topic at hand — will you feel upset that your story or photo didn't get reactions, or perfectly fine keeping it to yourself? “Begin to question what need you’re trying to fulfill through your posts,” she says. “Then, you can reassess whether or not you really need to share so much of your private world on such public domains.”

Cole agrees with this idea, saying that when debating sharing intimate content, the first step is to ask yourself what you are getting out of oversharing; that way, you'll better understand why you're doing it. "For instance, do you feel like you’re deepening relationships with others by sharing deeper things?" she asks. "Or, are you craving deeper conversations rather than small talk, which leads you to overshare?"

Not every oversharer thinks before revealing, but if you're bothered by excessive info seen on social media, it's easy to simply hit "unfollow." In person, however, it can be a lot harder to avoid hearing someone else's details, especially in a setting like the workplace. If you're uncomfortable with a coworker sitting at the desk right next to yours giving you a play-by-play of her drunken adventures the previous night, what are you supposed to do?

Cole adds that if you'd like, you can suggest catching up about personal matters another time — outside the office. Similarly, if you’re on a first date and they overshare, you can tell the person you’d prefer to take things slow, Cole suggests. And in any circumstance, if what a person is disclosing feels extreme or serious enough to leave you unsettled, you can also recommend that they speak with a therapist, not you.

“In general, it’s good to think about the equality in the relationship — is the person (friend/coworker/someone you’re dating) you are sharing with sharing with you in the same way?” Cole says. “That can help to determine whether it’s ‘good’ or somewhat problematic.”

The more you understand the reasons for oversharing and when it's appropriate, the more you can modify your own behavior — or learn to deal with those around you doing it 24/7.

This article was originally published on May 31, 2019