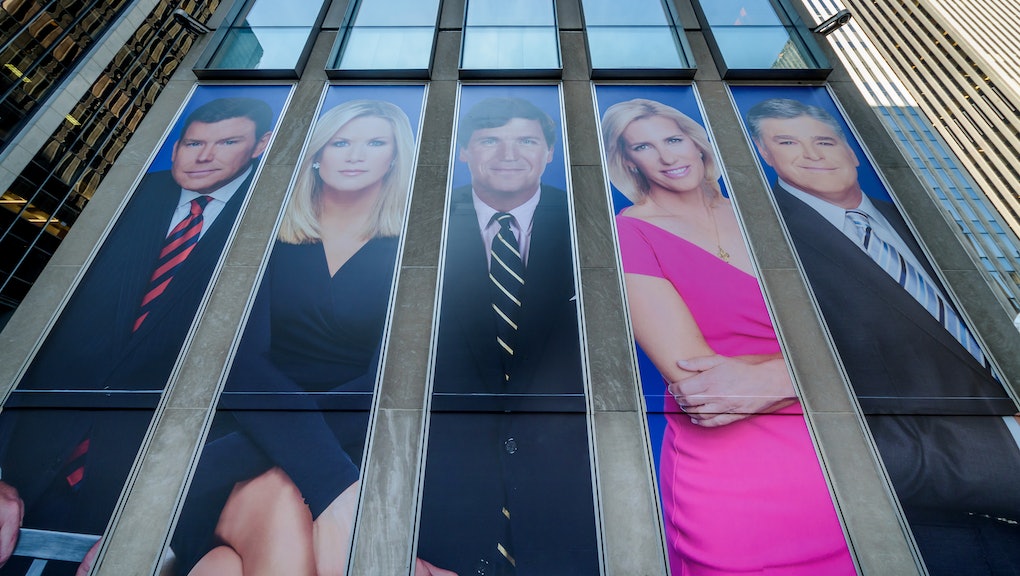 Why do we give a shit about Tucker Carlson?

What is there to say about Tucker Carlson that hasn't already been said? It's a question I've been asking myself all morning, thanks to a recent glut of Carlson-centric essays and examinations in The Washington Post, The New York Times, and The Atlantic, among other prestige outlets. Why is it that Carlson, of all people, is worthy of this sort of fascination-bordering-on-obsession from so many — or at least, why do those that choose to profile Tucker think he holds that fascination among the rest of us?

In part, the answer is obvious: Carlson is almost certainly the most influential broadcaster on television today. He is the lynchpin of Fox News's ongoing ratings boom, so much so that the network has given him a second, daytime show on top of his juggernaut evening program. While Fox News's most bankable personality may not be an actual journalist in the eyes of the law, Rupert Murdoch and Co. are apparently more than happy to give him a lofty platform upon which he can pretend to be one anyway. With that in mind, it's easy to see why Carlson, with his outsized ability to direct and dictate the conservative agenda of the day, would be such a figure of fascination.

But over the course of his now-decades in broadcast "journalism" — from his start as a bowtied right-wing dweeb on CNN to his current position as the heir apparent to the infamous Father Coughlin — have any of the many, many, many profiles of Carlson actually uncovered anything of substance? Is there any sort of deep, inner mystery to be solved about this man, who has spent the majority of his life in the public eye? It sure doesn't look seem like it!

Consider the nearly 7,000 words published Wednesday by The Washington Post describing, as the story's title promises, "How Tucker Carlson became the voice of white grievance." The Post's exposé is largely a series of anecdotes about Carlson's time in broadcasting, his shitty behavior as a grade schooler, and some color commentary from media observers and conservative so-and-so's about how influential Tucker is. In the end, it's hard to see what we're supposed to take from what is a legitimately impressive corpus of work. That Carlson is a bombastic racist? He literally proves that point every single night on his eponymous show! That he has no real ideological core beyond a shifting array of bigoted grievances? Anyone who's watched Carlson glibly flip from warning about creeping sharia law to Black Lives Matter to critical race theory can see he's an opportunist who simply flits from one moral panic to another. That he's a child of wealth and privilege? He's literally written about his fancy upbringing himself. Embarrassing anecdotes and general alarm-ringing aside, is this all that substantively different from the many, many Carlson profiles that have come before?

If you want to understand Tucker Carlson, watch his show. It's as simple as that. There's no need to keep spelunking in the fetid caves of his past.

Of a slightly different shade of Carlson reporting is the recent Atlantic feature on Tucker's new daytime show, Tucker Carlson Today, which offers a less pugilistic, more fauxstalgicly folksy version of Carlson, replete with a rustic mise en scene. Unlike in the Post, the focus in The Atlantic is less on Carlson himself than it is on the broader ahistorical use of Americana as a means to fearmonger and demagogue against those who are somehow "against" it. But here too, what sort of new and penetrating insight into Carlson have we gleaned? Between his evening show and his new daytime gig, the programming form may have been tweaked, but the function remains ultimately the same.

And yet, simply by being the biggest and the loudest of his kind, Carlson remains a figure of obsessive fixation. For years he has time and time again been profiled as an enigma in need of solving or a figure in the midst of a redemptive arc. If last month's Times feature on Carlson was instructive in any way, it was largely to point out the foundational hypocrisy at the core of his whole shtick — specifically, that he has long been a favorite source for journalists, despite his public anti-press denunciations.

And again, what is the revelation here? "How the sausage gets made"-ing aside, what does this tell us about Carlson that we don't already know? Of course he's a hypocrite who manipulates and engages and plays the press just as much as he decries them. As appealing as it may be to see his hypocrisy laid out in black and white — and as the author of many, many Tucker blogs, believe me, I get that instinct! — there comes a point where the returns have diminished so much that all the obsession with "understanding" Carlson becomes unnecessary.

If you want to understand Tucker Carlson, watch his show. It's as simple as that. There's no need to keep spelunking in the fetid caves of his past. It's all right there in front of everyone, night after night, year after year. For as much as Tucker may have changed his clothes and his affectations and the volume of his voice over the course of his career, he's never actually hidden what he really is. There is no secret to Tucker Carlson, no "a-ha!" moment where it'll all make sense. There's just him, on TV, every night, saying what he knows his audience wants to hear. And yes, it's important to cover that — he is, after all, a figure of huge influence and power. But sometimes what you see is really all that you're going to get.

More like this
The first insurrection felony sentence is here, and nobody's happy about it
By Rafi Schwartz
Large adult son Andrew Giuliani won't stop talking about cheese for some reason
By Rafi Schwartz
More than 200 GOP lawmakers asked the Supreme Court to overturn Roe v. Wade
By Rafi Schwartz
Stay up to date