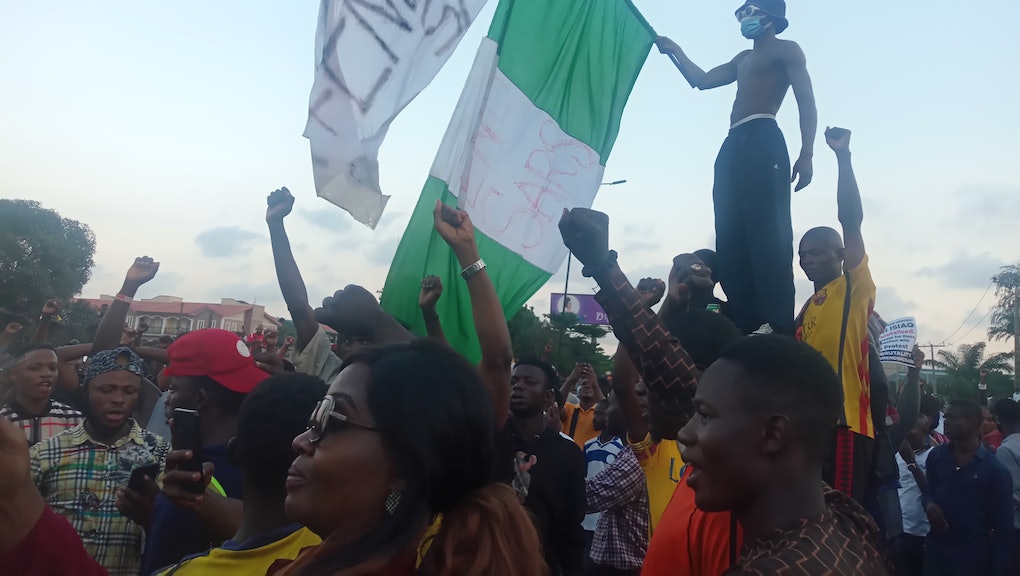 Protests against police brutality in Nigeria have gotten a big visibility boost from some famous faces in recent days, including Burna Boy, WizKid, John Boyega, Chance the Rapper, and Cardi B. They’re throwing their weight behind a movement that spilled from social media into the streets last week, as young Nigerians demand sweeping reform to corrupt law enforcement practices. While the government seemed to acquiesce over the weekend, protesters weren’t satisfied, and promised to keep applying pressure until real change was achieved.

The outrage was fueled by a video that circulated last week, allegedly showing members of the police squad known as SARS, for Special Anti-Robbery Squad, fatally shooting a man in Delta State in southern Nigeria. (Police denied SARS involvement in the man’s death.) Angry people took to social media to share their own stories of brutality at the hands of Nigerian police, prompting a globally-trending social media campaign to abolish SARS. Crowds also staged IRL protests in Nigeria and in expatriate communities around the globe.

Over the weekend, the Nigerian government announced it would disband SARS, which was formed in 1992 to target violent crime in the nation’s capital, Lagos. Considering anonymity vital to their ability to take down the gangs that terrorized the city at the time, SARS operated as a shadowy 15-member cabal of plainclothes officers. But critics say the task force's faceless nature emboldened rogue officers to abuse their power. SARS has been accused of extorting well-dressed young people, shaking them down for money, and torturing, abusing, or even killing those who resist. Amnesty International documented at least 82 cases of abuse and extrajudicial killings by SARS officers from January 2017 to May 2020.

International celebrities threw their weight behind the #EndSARS movement on social media. Chance the Rapper and Cardi B both solicited more information on the issue from fans. Burna Boy financed a series of #EndSARS billboards around Nigeria and released a statement that read, “In my opinion, abolishing [SARS] is a definite first step, but we cannot afford to stop there.”

In Nigeria, celebrities and activists tapped into their clout to organize mass protests; on Thursday, a demonstration in Lagos Island was led by lawyer/singer Folarin Falana and the artist known as Runtown. They were joined by one of Nigeria’s biggest stars, Tiwa Savage. Falana, popularly known as Falz, told CNN he felt compelled to march because Nigerians have endured "too many numerous incidents of harassment, extortion and police brutality," adding that he’d also been targeted by corrupt officers.

The Nigerian diaspora community staged protests in solidarity over the weekend, with #EndSARS demonstrations in Canada, England, Germany, and the United States. Afrobeat stars Wizkid and Mr Eazi both attended a protest in London and spoke out in support of Nigerian activists. “We are not scared to speak,” WizKid told the crowd. “Nigerian youth, don’t let anyone tell you you don’t have a voice.” Mr Eazi noted he’d personally been harassed by SARS officers and added: "None of us are safe if we continue to stay in the comfort of our homes allowing people to speak and say it does not affect them.”

So what happens now? Part of the reason Nigerians aren’t buying the government’s promise to reform policing is because they’ve heard it before. “The government disbanded SARS in 2017, in 2018, and in 2019,” Nigerian graduate student Omobolanle Adams, 25, told The New York Times. “We’re not buying it this time.” Meaning the current protests — the biggest Nigeria has seen since 2012 — aren’t likely to abate until Nigeria’s president issues an executive order to officially abolish SARS and the government addresses police brutality in a serious way.

More like this
Miss Papua New Guinea's TikTok twerks aren't the problem — misogyny is
By Kara Weisenstein
'Exterminate All the Brutes' is a messy, ambitious documentary that ties together genocide, white supremacy, colonialism ... and Josh Hartnett?
By Nicholas Russell
You can feel for Khloé Kardashian and also recognize she's part of the problem
By Kara Weisenstein
Stay up to date