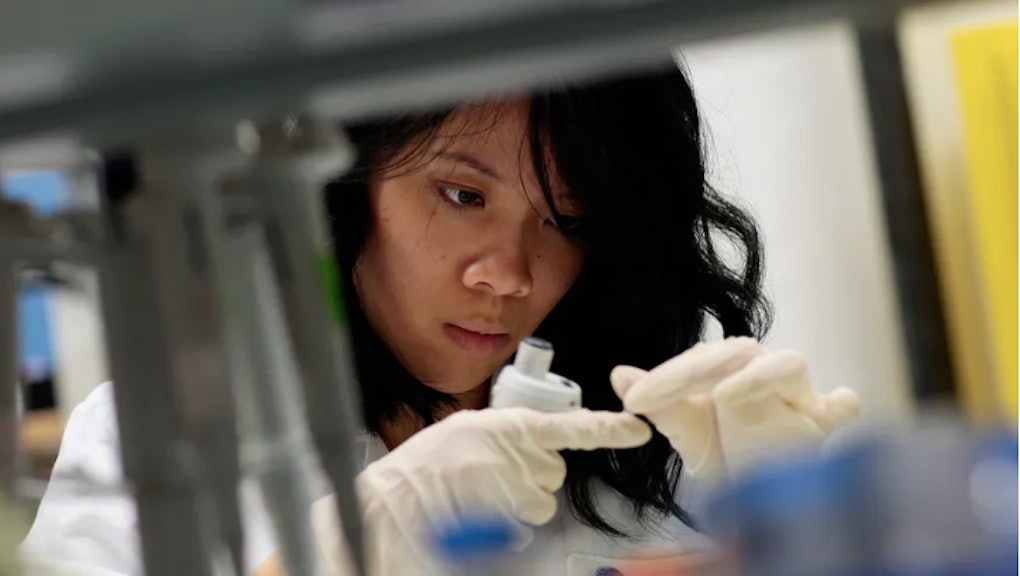 Why an HIV vaccine hasn't been developed yet

Smallpox has been eradicated from the face of the Earth following a highly effective, worldwide vaccination campaign. Paralytic poliomyelitis is no longer a problem in the U.S. because of development and use of effective vaccines against the poliovirus. In current times, millions of lives have been saved because of rapid deployment of effective vaccines against COVID-19. And yet, it has been 37 years since HIV was discovered as the cause of AIDS, and there is no vaccine. Here I will describe the difficulties facing development of an effective vaccine against HIV/AIDS.

I am a professor of pathology at the University of Miami Miller School of Medicine. My laboratory is credited with the discovery of the monkey virus called SIV, or simian immunodeficiency virus. SIV is the close monkey relative of the virus that causes AIDS in humans – HIV, or human immunodeficiency virus. My research has contributed importantly to the understanding of the mechanisms by which HIV causes disease and to vaccine development efforts.Dr. Anthony Fauci discusses the difficulty of finding a vaccine for HIV/AIDS in 2017.

Vaccines have unquestionably been society’s most potent weapon against viral diseases of medical importance. When the new disease AIDS burst onto the scene in the early 1980s and the virus that caused it was discovered in 1983-84, it was only natural to think that the research community would be able to develop a vaccine for it.

At a now famous press conference in 1984 announcing HIV as the cause of AIDS, then U.S. Secretary of Health and Human Services Margaret Heckler predicted that a vaccine would be available in two years. Well, it is now 37 years later and there is no vaccine. The rapidity of COVID-19 vaccine development and distribution puts the lack of an HIV vaccine in stark contrast. The problem is not failure of government. The problem is not lack of spending. The difficulty lies in the HIV virus itself. In particular, this includes the remarkable HIV strain diversity and the immune evasion strategies of the virus.

So far there have been five large-scale Phase 3 vaccine efficacy trials against HIV, each at a cost of over US$100 million. The first three of these failed quite convincingly; no protection against acquisition of HIV infection, no lowering of viral loads in those who did become infected. In fact, in the third of these trials, the STEP trial, there was a statistically significant higher frequency of infection in individuals who had been vaccinated.

A fifth vaccine trial, the HVTN 702 trial, was ordered to confirm and extend the results of the RV144 trial. The HVTN702 trial was halted early because of futility. No protection against acquisition. No lowering of viral load. Ouch.

The complexity of HIV

What is the problem? The biological properties that HIV has evolved make development of a successful vaccine very, very difficult. What are those properties?

First and foremost is the continuous unrelenting virus replication. Once HIV gets its foot in the door, it’s “gotcha.” Many vaccines do not protect absolutely against the acquisition of an infection, but they are able to severely limit the replication of the virus and any illness that might result. For a vaccine to be effective against HIV, it will likely need to provide an absolute sterilizing barrier and not just limit viral replication.

HIV has evolved an ability to generate and to tolerate many mutations in its genetic information. The consequence of this is an enormous amount of variation among strains of the virus not only from one individual to another but even within a single individual. Let’s use influenza for a comparison. Everyone knows that people need to get revaccinated against influenza virus each season because of season-to-season variability in the influenza strain that is circulating. Well, the variability of HIV within a single infected individual exceeds the entire worldwide sequence variability in the influenza virus during an entire season.

What are we going to put into a vaccine to cover this extent of strain variability? HIV has also evolved an incredible ability to shield itself from recognition by antibodies. Enveloped viruses such as coronaviruses and herpes viruses encode a structure on their surface that each virus uses to gain entry into a cell. This structure is called a “glycoprotein,” meaning that it is composed of both sugars and protein.

But the HIV envelope glycoprotein is extreme. It is the most heavily sugared protein of all viruses in all 22 families. More than half the weight is sugar. And the virus has figured out a way, meaning the virus has evolved by natural selection, to use these sugars as shields to protect itself from recognition by antibodies that the infected host is trying to make. The host cell adds these sugars and then views them as self.

These properties have important consequences relevant for vaccine development efforts. The antibodies that an HIV-infected person makes typically have only very weak neutralizing activity against the virus. Furthermore, these antibodies are very strain-specific; they will neutralize the strain with which the individual is infected but not the thousands and thousands of other strains circulating in the population. Researchers know how to elicit antibodies that will neutralize one strain, but not antibodies with an ability to protect against the thousands and thousands of strains circulating in the population. That’s a major problem for vaccine development efforts.

HIV is continually evolving within a single infected individual to stay one step ahead of the immune responses. The host elicits a particular immune response that attacks the virus. This puts selective pressure on the virus, and through natural selection a mutated virus variant appears that is no longer recognized by the individual’s immune system. The result is continuous unrelenting viral replication.

So, should we researchers give up? No, we shouldn’t. One approach researchers are trying in animal models in a couple of laboratories is to use herpes viruses as vectors to deliver the AIDS virus proteins. The herpes virus family is of the “persistent” category. Once infected with a herpes virus, you are infected for life. And immune responses persist not just as memory but in a continually active fashion. Success of this approach, however, will still depend on figuring out how to elicit the breadth of immune responses that will allow coverage against the vast complexity of HIV sequences circulating in the population.

Also, scientists have recently figured out a way to achieve protective levels of these antibodies for life from a single administration. For life! This delivery depends on a viral vector, a vector called adeno-associated virus. When the vector is administered to muscle, muscle cells become factories that continuously produce the potent broadly neutralizing antibodies. Researchers have recently documented continuous production for six and a half years in a monkey.

We are making progress. We must not give up.

This article is originally published on The Conversation by Ronald C. Desrosiers. Read the original article here.