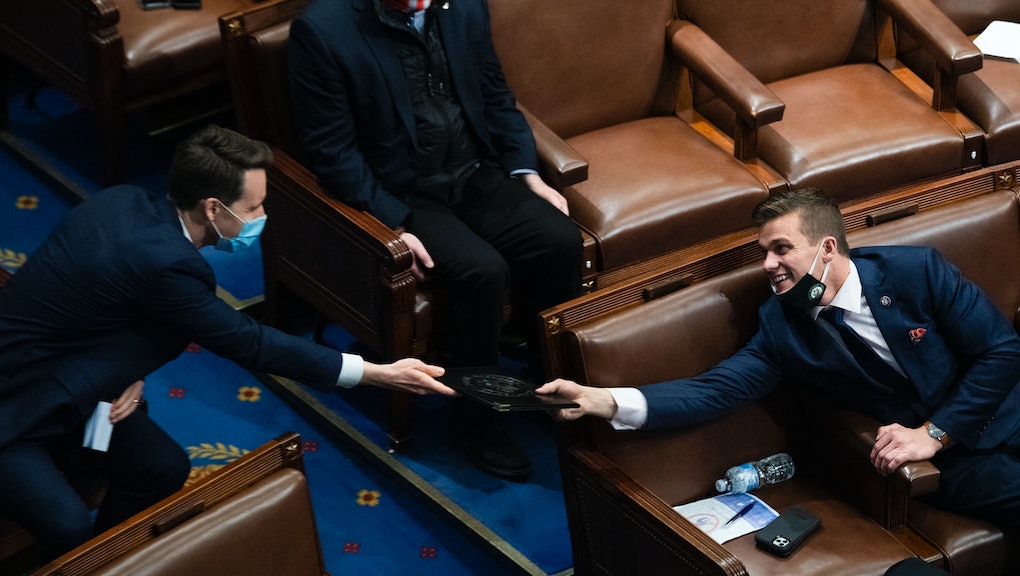 Why is a quarter of Congress still not vaccinated?

At this point in our year-plus of pandemic existence, the most valuable commodity in the U.S. is arguably one of the three COVID vaccines cleared for mass use. And while different states are at different stages in the distribution process, the fact remains that what once was a trickle of vaccine doses has become a steady if uneven flow for much of the country, as people by the millions leap at the opportunity to regain some sense of normalcy in their — and their loved ones' — lives.

Given the overwhelming urge to put as much of the past year's hardships behind us, you'd think that the people in some of the country's most privileged positions would themselves leap at the chance to get vaccinated — especially if their access to a dose wouldn't necessarily preclude someone else from getting their inoculation as well.

"I get a vaccine, and I'm not cutting in line? Great!" is what a normal person might say. But in the United States of House of Representatives, "normal" people are somewhat of an endangered species, which might explain why approximately a quarter of the nation's congressional representatives remain unvaccinated, even though Congress has its own reserve of vaccine doses earmarked for lawmakers' exclusive use.

Nevertheless, according to an Axios investigation this past weekend, a full 25% of the House has refused, avoided, or not reported having gotten the shots set aside for them and only them. And while that might simply seem like the sort of pigheaded obstinance we've largely come to expect from our elected officials, the refusal to fully vaccinate has had an acutely deleterious effect on Congress's (admittedly limited) ability to get anything done.

Citing reports "that roughly 75% of all members in this House have had a vaccination for COVID-19," House Minority Whip Steve Scalise (R-La.) proclaimed "a strong desire to get back to a regular floor schedule" during a House session last week. Currently, to accommodate social distancing guidelines and other CDC recommendations to mitigate the spread of COVID-19, the House votes in waves, which Axios estimates takes up to three times as long as votes under non-pandemic circumstances.

House Minority Leader Kevin McCarthy (R-Calif.) stressed a similar impatience in a letter to House Speaker Nancy Pelosi, demanding she share her "plan to reopen the People's House." Among questions McCarthy wanted answered is a timeline for ending the practice of proxy voting and an update on the House's current mask requirements — two issues which Republicans in particular have repeatedly flouted in defiance of House rules and a general sense of decency.

While Axios did not identify which House members have abstained from vaccination, multiple polls have shown Republicans are significantly more likely to refuse coronavirus vaccines than Democrats are, with one recent survey suggesting that nearly half of voters who backed former President Donald Trump have no plans to be inoculated. Many GOP members of Congress have been forthright in their refusal to be vaccinated, including North Carolina Rep. Madison Cawthorn ("I won’t be taking it. The survival rate is too high for me to want it") and Rep. Ken Buck of Colorado ("I have the freedom to decide if I’m going to take a vaccine or not, and in this case I am not going to take the vaccine").

So, as thousands of people continue to struggle to navigate labyrinthine sign-up sheets and access rules, elected officials with immediate, legal access to the most coveted vaccine on the planet will refuse to take it, likely just to make a point.