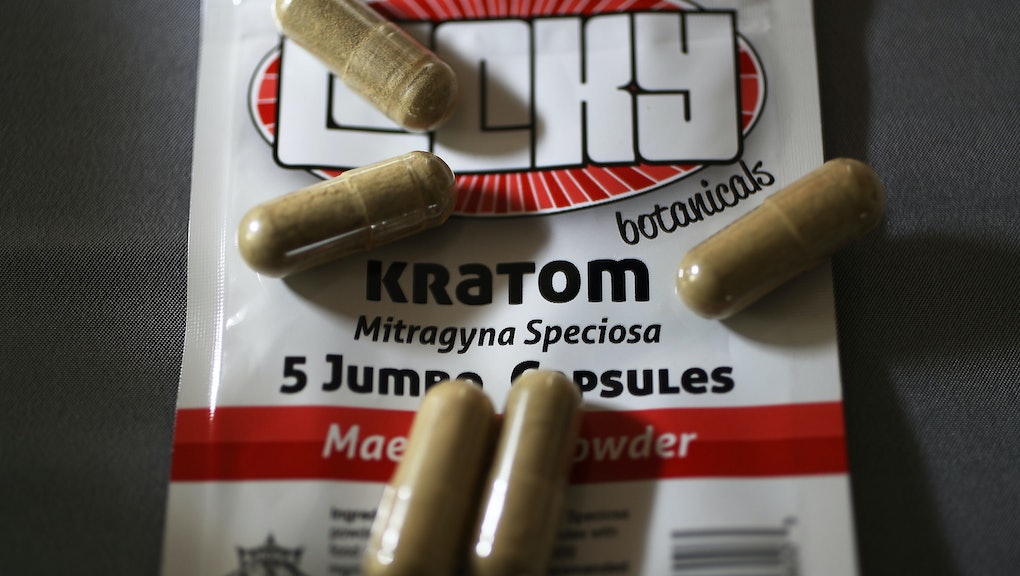 Why kratom sold in the U.S. is uniquely dangerous

Kratom, a traditional Southeast Asian herbal medicine from the leaves of the tropical tree Mitragyna speciosa, has gained favor in the U.S. as a legal high over the past decade. Almost two metric tons of kratom are imported from Southeast Asia monthly. A typical dose of kratom consists of three to five grams, suggesting over 15 million users in the U.S.

In Southeast Asia, people have safely consumed kratom by chewing the leaves or brewing them into tea for centuries. But in the U.S., where it is widely available, the herb has been linked to many poison control center calls and even deaths. As a pharmacist and professor of medicinal chemistry, I wanted to study why.

Our team has been researching kratom for over a decade to determine the scientific validity of beneficial and harmful claims that have been made. Why would there be a history of safe kratom use in Southeast Asia while there are documented reports of harm in the U.S.?

Our recent studies suggest a difference in kratom products available in the U.S. and traditional preparations that may contribute to these risks. Traditionally prepared kratom is from freshly harvested leaves, whereas kratom in the U.S. is from dried leaf material, which changes in chemical composition as it dries and ages.

The two faces of kratom

In Thailand and Malaysia, people for centuries have enjoyed kratom as a “tea” to treat a variety of conditions or to increase stamina for outdoor laborers. It is difficult to determine exactly when kratom first appeared in the U.S., but, because of the traditional reports of kratom being an opium substitute, interest grew. There seemed to be no thought that kratom in the U.S. could be different from kratom in Southeast Asia.

However, kratom gained federal attention in the early 2000s when the U.S. Drug Enforcement Administration listed the plant as a drug of concern.

Because of increasing concerns for public health and safety in 2016, the DEA planned to place the plant and specifically two alkaloids from the plant — mitragynine and 7-hydroxymitragynine — into Schedule 1 of the Controlled Substances Act. This action would make kratom and these two alkaloids (if purified from the plant) illegal, with no legitimate medical use.

Just six weeks later, the DEA made an unprecedented announcement that it was withdrawing its notice of intent. This was due to thousands of public comments, mostly from individuals, urging the DEA to reconsider. Importantly, the DEA said that it would also consider conducting a scientific and medical evaluation of kratom.

So what has science taught us since this pause?

One thing that’s clear is that there is a difference in the chemical composition of traditionally prepared kratom and the dried leaf or extract products sold commercially. According to our recent analyses, the traditionally prepared tea does not contain detectable levels of 7-hydroxymitragyine, the alkaloid the DEA cited (along with the major compound, mitragynine) in its decision to list kratom under Schedule 1.

Leaves from the kratom tree are dried and then ground into a powderlike substance. Many people add hot water to this and drink a kratom tea. Louis Anderson/AFP via Getty Images

Traditional use of kratom in Malaysia

In July of 2019 I visited a kratom plantation in Malaysia and gained firsthand experience in the traditional preparation. Fresh leaves are picked each day and, within minutes, placed in boiling water for a couple of hours. The resultant “tea” is ladled out and generally placed into plastic bottles or bags for use throughout the day. Most traditional users prepare three glasses spaced out during the day by diluting each glass with an equal amount of water.

Kratom is also a recreational drink there, much like coffee or tea. People also have used it traditionally to avoid withdrawal symptoms when opium users would exhaust their supply. This also fueled use in the U.S., with individuals seeking alternative methods to treat pain or wean themselves from opioids. The real question we had to ask as researchers was whether it was just a replacement or a legitimate treatment.

Kratom in the U.S. has varying amounts of opioid activity

There is evidence that the plant does not produce 7-hydroxymitragynine but, rather, that the alkaloid is generated after leaves are harvested and dried. According to the previous scientific literature, 7-hydroxymitragynine has been reported to be present in up to 2% of the total alkaloid content of the dried plant material.

In contrast, purified mitragynine has demonstrated little to no abuse potential, and is able to reduce or block rodents from self-administering heroin or morphine. In other words, mitragynine seems to be reducing the desire to ingest addictive opioids.

So the key question is, how much 7-hydroxymitragyine is too much in a kratom product? This remains unanswered, but the wide variation of 7-hydroxymitragynine content may explain why there is more harm seen in the U.S. from kratom. As the dietary supplement market is poorly regulated in the U.S., it is truly a “buyer beware” situation.

The most recent findings

My research team has examined the facts, and this is what we have found in our most recent study: Kratom tea does have potential to serve as a treatment for opioid withdrawal and possibly to help wean addicts. However, controlled clinical studies in humans are still absent and are needed to make evaluations of safety and therapeutic efficacy.

The unreliable measurements of kratom products sold in the U.S. create uncertainty. Until there is a standardized product, preferably one that is prepared in the traditional way, our society must weigh the risks against the putative benefits. The risk of kratom addiction appears to be low, but there are people who are are treated for kratom addiction. It is our hypothesis that addiction to kratom is due to the inferior quality and amount of the product ingested. Science is leading the way to these answers, and the fate of kratom is in the balance.

This article is originally published on The Conversation by Christopher R. McCurdy. Read the original article here.

More like this
How scientists detect COVID-19 variants before they wreak havoc
By Darwin Bandoy and Bart C. Weimer
This new coronavirus-repelling mask has a shady chemical in it. Is it worth it?
By C. Michael White
To legalize weed successfully, we need to draw inspiration from Canada
By Michael J. Armstrong and Paul Seaborn
Stay up to date