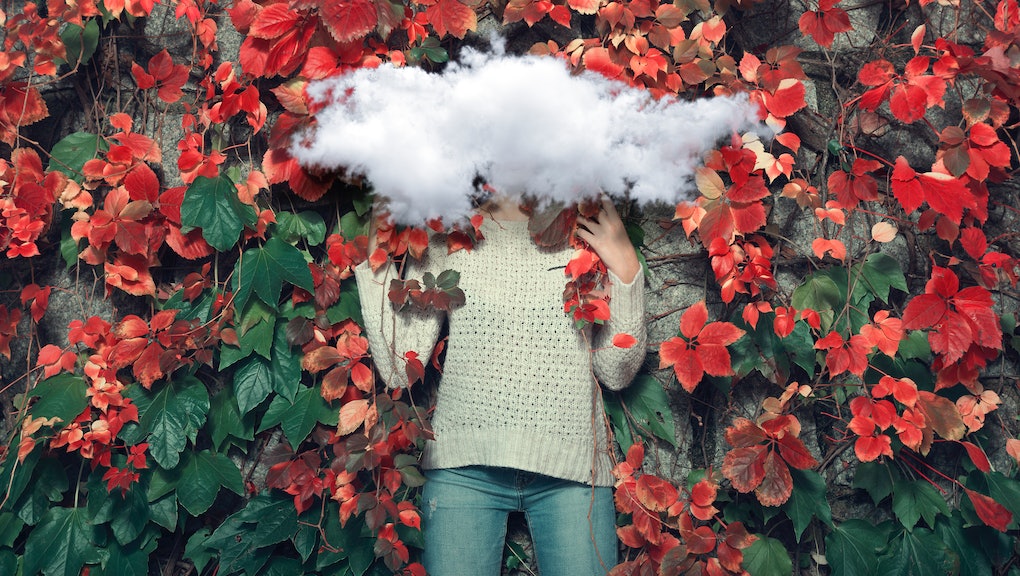 Why some people hallucinate without drugs

When Joey DeRusha was seven, he saw “a large disc-shaped flying saucer with red and blue spinning lights” outside his bedroom window. “I stared at it for somewhere between 10 and 30 seconds,” the Los Angeles-based artist and musician recalls. “Then, I thought to put on my shoes and go outside to have a closer look. I got up to put my shoes on and tied them then looked back out the window, and it was gone. I thought, if only I hadn’t bothered to tie my shoes, I wouldn’t have missed it.”

This anecdote might prompt questions about what this person could be on. Or what they could be going through. But experiences like DeRusha’s — hallucinations seemingly unprompted by drugs — are surprisingly common. One 2016 study of 7,403 people in England found that 4.3 percent had experienced hallucinations without being on any drugs, including many without diagnosed mental health conditions. Another study from 1991 found that 10-15 percent of people in the U.S. had experienced auditory hallucinations.

Emin Gharibian, a psychologist specializing in neuropsychological and forensic evaluations, estimates that between 4 and 21 percent of people have waking hallucinations (ones that happen mostly during your transition from wakefulness to sleep) without any other psychotic symptoms. “They can range from seeing things in the dark or hearing your name called,” he says.

Hallucinations that aren’t induced by substances or mental illness are likely more common than they appear because people tend to hide them due to stigma, says Florida-based psychotherapist Nicole Amesbury. “The truth is, we are all using our biological brains and bodies alongside our memories and our social and environmental experiences to construct and form reality and make sense of this world,” she says. “A lot more goes into it than the average person thinks about.” And although we may think of visions when we hear “hallucinations,” they often involve other senses; hearing voices is a common one, says Amesbury.

Some cultures view experiences like these as spiritual and prophetic, Amesbury says. Historically, many experiences deemed “paranormal” are eventually chalked up to hallucination. Adam Patterson, a 34-year-old consultant in Boston, once woke up to see his grandmother standing above his bed. “I was startled, rubbed my eyes, and she was gone,” he recalls. Eerily, he later found out she had died just a few hours before the sighting.

One of the reasons someone might have a hallucination despite not being on any substance or having a relevant mental illness in lack of sleep. Sleep deprivation can often alter your perception in such a way that may cause hallucinations, Gharibian says. Social isolation and withdrawal may even cause hallucinations, particularly auditory hallucinations, through the reduction of sensory input and the psychological effects of loneliness.

Anxiety and the hyper-vigilance it can spark could also lead to hallucinations, he says. For example, if a new parent is very anxious about their child crying, they might actually hallucinate the baby crying. Sometimes, traumatic memories can make someone hallucinate, says Amesbury. One of her patients once smelled a gas leak in her home when nothing of the sort was actually happening. This, Amesbury explains, might have been the emotional residue from a traumatic experience — her patient had witnessed a gas explosion as a child.

The causes of these mirages aren’t always psychological, though; they can also be physical. For some people, hallucinations are associated with migraines, says James Giordano, professor of neurology and biochemistry at Georgetown University Medical Center. These may involve “sensations of lights, figures, and images of lines and edges during the ‘pro-dromal’ period — what is known as an ‘aura’ episode — before the onset of headache.” Certain kinds of seizures can also make someone hallucinate figures, sounds, and smells; some report a “burnt citrus” scent right before the seizure.

In addition, it’s possible that people with hallucinations have higher production of the neurotransmitter dopamine — one that plays a big role in delivering pleasure — in the striatum, a part of the brain involved in the neural reward system, says Gharibian. Even if the dopamine levels aren’t as high as someone with full-blown psychosis, they can be treated with antipsychotics if the hallucinations are debilitating.

Sleep disorders, which often but not always include that aforementioned lack of sleep, can also make someone prone to hallucinations. Gary Brooks, a 39-year-old consultant in Brussels, regularly hallucinates due to sleep paralysis — but often, he’ll see shadowy figures during the first few minutes after he wakes up even when he’s not paralyzed. “I can move, am awake, and know it's all bollocks — and yet, they persist,” he says. “It's interesting because I know it's not real, so I can have a totally relaxed look at some 'monsters,'” he says.

Brooks is describing what’s known as hypnopompic hallucinations, which occur when someone’s in the process of waking up. Around 10 to 12 percent of people experience these at some point, Giordano says. More common are hypnagogic hallucinations, which happen while someone’s falling asleep, occuring in about 30 percent of people. They’re most often auditory — people will report hearing voices or banging or rustling sounds — but some may see forms or figures or hallucinate that something’s touching or crawling on them.

Hypnagogic hallucinations are effects of the brain mechanisms involved in shifting from conscious perception to semi-conscious attention to stimuli in your environment and activity in your sensory processing networks during the light stages of sleep, says Giordano. This could explain why people like Patterson have hallucinations upon waking.

Even though hallucinations can be benign, don’t dismiss them entirely. In fact, if you have several of them, talk to a doctor because they could be a sign of a physical or mental condition. Sometimes (though very rarely, a la Izzy Stevens’ hallucinations on Grey’s Anatomy) they could indicate more serious problems like brain tumors, says Amesbury.

Aside from potential underlying conditions, Amesbury only considers hallucinations an issue if the person’s hallucinating that they’re being ordered to do certain things, if they’ve lost touch with reality, or if the hallucinations interfere with their health, work, or relationships.

“The visual events can be problematic if individuals have difficulty discerning what is real from what is hallucinatory and, as a result, respond or react to their fictive visual events in problematic — if not dangerous — ways,” says Giordano. However, he adds, “for most people with this syndrome, there is no complete treatment, and they tend to deal well with these events once they are assured that these do not represent symptoms or signs of mental illness.”

More like this
Having a bad trip? This hotline can help you find your chill
By Melissa Pandika
COVID-19 vaccine drug interactions: Is there anything I should avoid?
By Joseph Lamour
How long a weed high lasts, according to science
By Melissa Pandika
Stay up to date