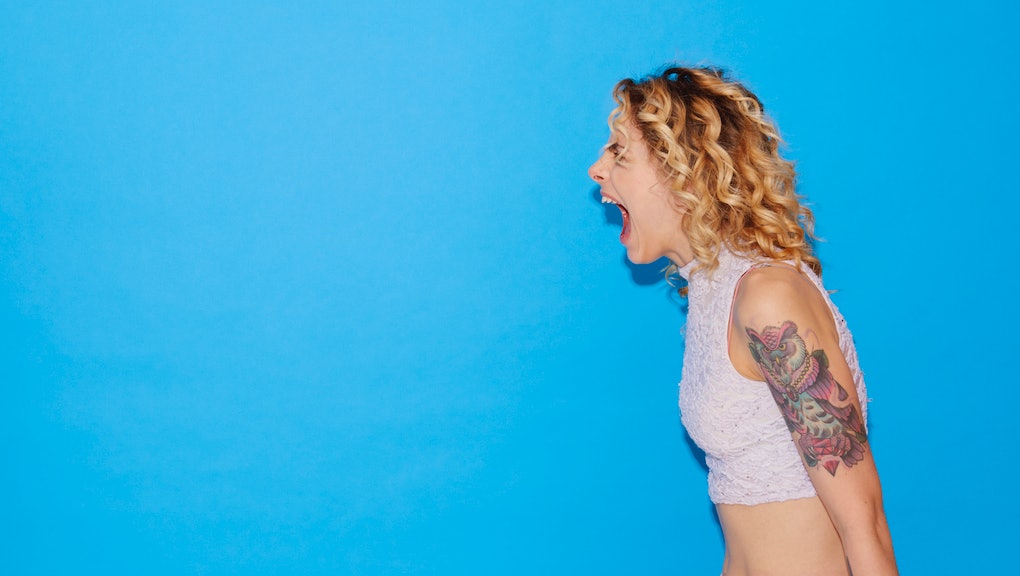 Why some people's anxiety comes out as white-hot anger

Last week, my laptop started acting up minutes before I had to interview a source for a story, slowing down and eventually freezing. Seriously? Now? I thought. Noticing the battery running low, I tried to charge it, but my partner’s empty beer boxes were stacked up in front of the only open outlet. My body tense with rage, I hurtled the boxes behind me. They hit the wall and landed on the carpet with a hollow thud. “There’s too much shit in here,” I hissed loud enough for my partner to hear from our bedroom.

Now that my blood has stopped boiling, I can recognize this moment as yet another example of the connection I’ve noticed between my anger and my anxiety. On bad anxiety days, I tend to get more easily frustrated, more likely to lash out. Amid the uncertainty of this pandemic, I’ve had to be especially mindful about managing my anxiety in order to also keep my anger in check. According to Tess Brigham, a therapist in San Francisco, anger and anxiety really are linked. She explains why that angry outburst is probably anxiety.

“Underneath all anger is fear,” Brigham tells me. “I think a lot of times, the anger that we feel is really, truly more our fear, and fearing that we don’t have control.” For many of us, anger is easier to experience than fear. That’s especially true for men, in whom anger is more socially acceptable. (The opposite is true in women, although that apparently hasn’t stopped me.) And gender identity aside, in a culture that glorifies bravery, we generally don’t want others to see us as scared.

As a result, we might not only feel rage, but also channel it inward, toward ourselves. Brigham has noticed more of her clients getting mad at themselves for, say, not being productive because they’re so fatigued. As much as it sucks to blame ourselves, it does allow us to frame our situation as something we can control. If we're mad at ourselves for not being productive at work, we can at least plan to wake up earlier or use a productivity timer.

But with anxiety, “you have to accept the feeling,” Brigham says. While tools and techniques exist to lower and manage it, “at the core, your anxiety is never going to completely go away. We like things that are going to fix it, that are to going to solve it.”

Beneath the anger that triggered my box-throwing incident was the fear of being late to my interview and setting a bad impression on my source. I feared, too, that my lateness would mean I was disorganized and inconsiderate. Fuming and telling myself I should prepare for interviews earlier made me feel terrible, but also less helpless. I can draw these connections now, but as Brigham points out, it takes a lot to pause, explore the source of your anger, and trace it to your anxiety in the moment. Spiraling into rage is way easier than undergoing this multi-step process.

Brigham refers to this emotional labor as “cognitive cost.” “There’s cognitive costs to not raging,” she says, “but if you do the work upfront, in the end it will pay off.” Working on ourselves and our responses to anxiety can improve our relationships, but it takes time — we might not reap those benefits for months or more. “That’s what keeps people stuck in this cycle of, well, this is too much work for me right now. I’m tired.”

That’s especially true now, at this stage of the pandemic. While Brigham says we might’ve initially had a sense of collective anxiety — that we’re all in this together — we’ve now moved into utter exhaustion over basically everything, from logging in and out of Zoom meetings, to securing vaccination appointments. Our pandemic fatigue makes it that much harder to practice the self-reflection needed to identify our angry outbursts as anxiety and respond accordingly.

That said, not addressing our anxiety can wreak havoc on our relationships. “That mood can just permeate everything,” Brigham says. It’s asking a lot of our partners and others around us to constantly remind themselves that our bad mood is because of us, not them. We can end up in a cycle of rage and regret, where we snap at them, then apologize. Even if they accept our apology, they can lose trust in us, and rightly so. The more we engage in this cycle, the more we erode their trust. Eventually, we might say something the other person just can’t heal from.

Passive-aggressively seething and throwing boxes wasn’t fair to my partner. I apologized and told him I wasn’t angry at him, but at the situation, which Brigham says is often the case: “You’re just angry at the situation because the situation makes you feel fearful.” Luckily, he has an abundance of patience, but I know I can’t count on that forever.

To rein in your anxiety before it escalates into an angry outburst, practice self-compassion first and foremost, Brigham says. Don’t judge yourself — simply accept that you’re tired and over it. Find creative ways to make your life easier, whether eating off paper plates so you don’t have to wash dishes, or buying more towels so you don’t have to do laundry as often, and donating them later.

It is important to note that there's a huge, glaring line between anger and abusive behavior. Anger that looks like verbal (or physical) abuse — which cases of have skyrocketed during the pandemic — is about way more than anxiety and shouldn't be tolerated on any level. Dealing with that (or seeing that in yourself) is a whole other article, but please reach out for support if you need to.

As for combatting anxiety disguised as anger: Embrace work-life integration, rather than work-life balance, Brigham adds. Instead of forcing yourself to work from 9:00 to 5:00, schedule your day based on how you feel — go for a run at 2:00, if that’s when you feel at your physical best, and work a little later to make up for it.

Last but not least, limit your social media consumption. Rather than ruminate over a grim headline, research where you can donate your money or volunteer your time to address the underlying issue. Being gentle with myself ironically takes far more work for me than maintaining my go, go pace, I realize as I digest Brigham's advice, but I know my relationships and well-being will thrive as a result, even after this pandemic is behind us.

This article was originally published on Feb. 17, 2021

More like this
What are neopronouns and how do they honor identity?
By Tracey Anne Duncan
Remember the vaping crisis? Well, it hasn't gone anywhere
By Melissa Pandika
Tattoos and COVID-19 vaccine: How long do I need to wait?
By Melissa Pandika
Stay up to date