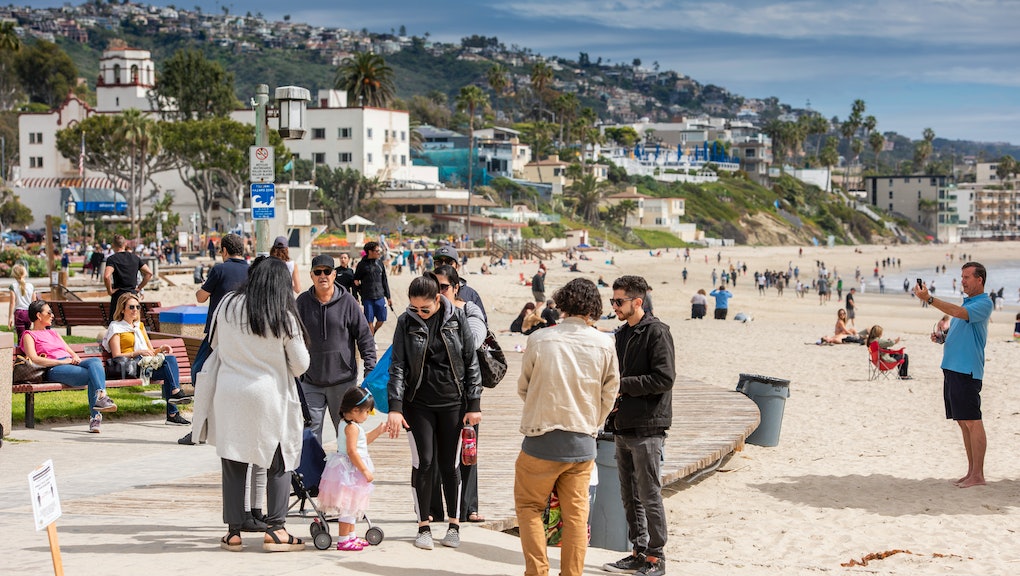 Why staying at home is so hard for some people

A little over a week ago, my sister DM-ed me a clip from a local news broadcast of folks sprawled out in Mission Dolores Park, a techie and hipster watering hole in San Francisco, even after California had already issued a stay-at-home order to slow the spread of the novel coronavirus. “I just felt like I needed one last day to hang out with my friends,” one guy said. Um, that’s not how this works, bro, I thought. How could you be so irresponsible? At the same time, I realized how shame-y I was being. This quarantine, and the accompanying feelings of isolation, has been hard for everyone, and maybe some of us can’t help but congregate. Why can’t we seem to stay apart?

For starters, the stay-at-home orders issued in many states run counter to how we’re hardwired. We’ve long lived in villages, tribes, and other communities, Tess Brigham, a marriage and family therapist based in San Francisco, tells Mic. If we didn’t cooperate and pitch in, we were ousted from them. As a result, “we have this innate desire to be loved and accepted, and to belong and be seen,” she says. “If you take that away from people, it’s incredibly difficult.”'

Indeed, we rely on all the subtle, mundane social interactions throughout our day to validate ourselves, Brigham explains. And we may not even realize we do this. But now, without these interactions, we’re left with our own thoughts and feelings, which can easily spiral into self-doubt without the people who care about us to make us feel better about ourselves — whether it’s a friend who's genuinely interested in how we’re doing, or a smile from our boss, reassuring us that we’re doing a good job.

The stay-at-home orders issued in many states run counter to how we’re hardwired.

Research on the health risks associated with loneliness provide further evidence that humans aren’t built for lockdowns. In a 2015 analysis of past studies, cited by the American Psychological Association, the increase in health risks due to social isolation is comparable to that due to smoking 15 cigarettes a day. A more recent analysis found evidence connecting loneliness and social isolation to poorer mental and heart health outcomes. Meanwhile, a review mentioned in a previous Mic article found that the studies examined reported negative psychological effects of quarantine that included anger, confusion, and post-traumatic stress symptoms.

We rely on all the subtle, mundane social interactions throughout our day to validate ourselves.

Extroverts have it especially tough these days. “The extreme extroverts, the ones who get energy and a sense of self from their interactions with people — I can imagine for them, this is incredibly, incredibly hard,” Brigham says. On top of that, there hasn’t been one unifying nationwide message around what social distancing looks like, she points out, and when we don’t know what we should or shouldn’t be doing, we make that call ourselves.

An intense drive for social interaction, combined with a lack of clear guidance around it, can lead us to think, “I’ll just have a few people over, and I know they’re not sick, so it should be fine.” “I feel like people don’t intend to do something that is bad or wrong,” Brigham says. “They’re sort of justifying it in their own minds.”

As an introvert, I don’t understand that overwhelming desire to socialize, making it easier for me to shake my head at people who are still getting together. But judging them, though tempting, ultimately doesn't serve us, Brigham says. While it’s definitely not ok for us to congregate right now, “we have to let go of that judgment, and we have to have empathy for people,” she says. Our society is set up so that official authority figures police us; “it’s not about us policing and blaming each other.”

While it might be easy to perceive social distancing as an individual responsibility, clear federal guidance, which many complain has been lacking, is just as important — especially when it comes to asking us to behave in ways that oppose the core of who we are.

More like this
How scientists detect COVID-19 variants before they wreak havoc
By Darwin Bandoy and Bart C. Weimer
Why some vaccinated people are still wearing masks outside
By Tracey Anne Duncan
India's failed COVID response leaves young people scouring social media for oxygen
By Urmi Bhattacheryya
Stay up to date