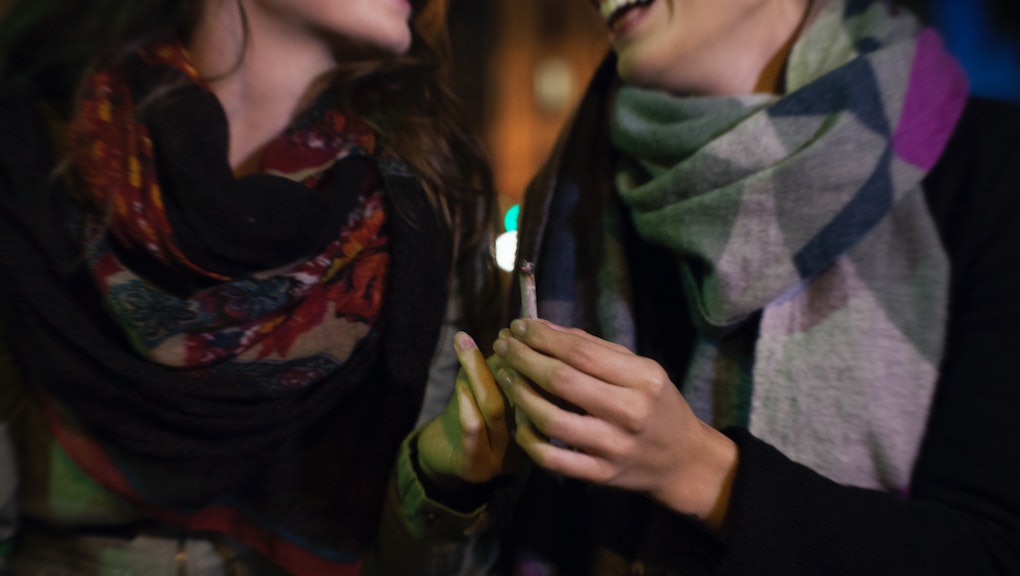 Why weed makes you laugh, according to science

I reach for cannabis mainly to soothe my anxiety, especially in these fraught times. But some of its other, non-chill effects — such as the giggles — also enhance my experience. If you consume weed, you likely know the feeling: constantly teetering on the brink of laughter, even if nothing remotely funny is happening. When I do notice something the slightest bit funny, I burst into hysterics, especially if I’m smoking with a friend. As a science-minded human who loves nerding out over cannabis’s effects on the brain, I asked experts to help me break down why weed makes you laugh.

Let’s start with what laugher truly is. “Laughing is really a reflex,” like coughing or sneezing, says Timothy Fong, a professor of psychiatry who also helps oversee the UCLA Cannabis Research Initiative. “It’s something that can be triggered spontaneously, by things we see and feel.”

When you use cannabis, you enter an altered state in which you perceive time, color, and pretty much everything differently. “That altered state makes the reflex [to laugh] more likely to be triggered,” Fong tells me, not unlike how a cold makes your coughing reflex more sensitive. Cannabis does this partly by boosting levels of chemicals in your body that trigger your laugh reflex, especially dopamine, Fong says. As a result, “things that aren’t funny become funny.”

He notes that cannabis also lowers the inhibition of your laugh reflex — say, in situations that your sober mind would deem giggling inappropriate — by acting on the frontal lobe, responsible for inhibiting behavior. Plus, the binding of tetrahydrocannabinol, or THC, the compound in weed that makes you high, to the endocannabinoid receptors located throughout your body spurs the release of dopamine and serotonin, “the happy neurotransmitters,” which can also lower impulse control, says Lewis Nelson, chair of the department of emergency medicine and chief of the division of medical toxicology at Rutgers New Jersey Medical School.

Also, laughter really is contagious, Fong says, even when you’re sober, which probably explains why the giggles tend to hit me hardest when I use cannabis with a friend. Throw a substance that messes with your laugh reflex into the mix, and “everything becomes a lot funnier.”

In general, the more potent the product — that is, the more THC it contains — the more likely it’ll cause the giggles, Fong says. More THC results in more binding to your endocannabinoid receptors, more neurochemicals being expressed, and “just more noise, like turning your stereo up louder,” he explains. “You’re going to get more intense responses.”

You might’ve come across lists of “top giggly strains,” like Laughing Buddha or Mango Kush, on cannabis websites. But the lack of clear national regulations around strains means there isn’t a whole lot of consistency in the amount of THC, terpenes, and other compounds in plants of a given strain, Fong notes (which has raised questions about the scientific basis of strains as a means of categorizing weed, VICE reports). The levels of these compounds in Laughing Buddha bought in one state might differ from Laughing Buddha bought in another state

What’s more, everyone experiences cannabis differently, which can, in turn, depend on factors like how they consume it, or whether they’re doing so on a full or empty stomach. In other words, one person’s description of a strain may not hold true for everyone, and if you’re seeking out a strain with the express purpose of getting the giggles, it’ll be somewhat of a crapshoot.

The take-home message is that cannabis makes your laugh reflex easier to trigger, and as Fong emphasizes, it’s not a sign that you’re becoming psychotic. The next time I laugh my ass off while watching a nature documentary after taking an edible, I’ll know why.

This article was originally published on July 7, 2020

More like this
How long a weed high lasts, according to science
By Melissa Pandika
Your smaller pandemic friend group is actually a good thing
By Joseph Lamour
COVID-19 vaccine drug interactions: Is there anything I should avoid?
By Joseph Lamour
Stay up to date