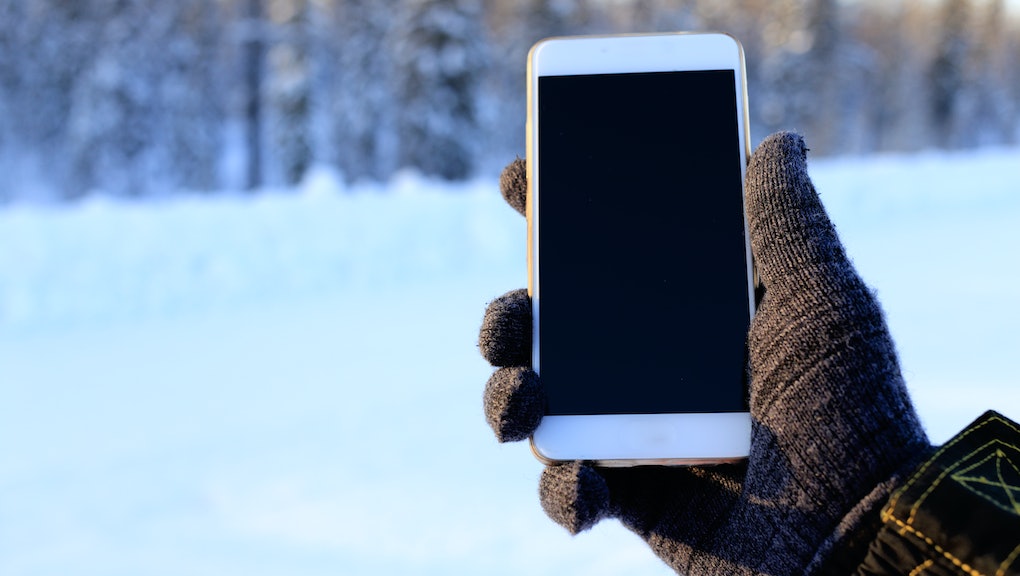 Why your phone dies in really cold weather

When winter arrives, it manages to slow just about everything down — but it can't bring humans to a complete halt. Even the garments we wear to keep warm once the temperature drops are made to enable our normal routines. Just take a look at gloves with fingertips designed specifically to work with smartphone screens so you can keep your hands from freezing while still checking your notifications. Unfortunately, phones typically don't hold up quite as well under the same conditions. If you've ever used your phone in below-freezing temperatures, you've almost certainly experienced it slowing, becoming non-responsive and eventually completely shutting down. So what is it about cold temperatures that cause smartphones to die until you step foot inside?

It's all about the battery

When you see your phone start to blur as you use it or note that it is no longer responding immediately to each tap, you know that it's starting to slow down. Your phone isn't literally freezing when this happens — the performance issues actually stem from your phone's battery responding to freezing cold temperatures. "At low temperature the [lithium ion] battery resistance grows dramatically because the electrolyte's ability to shuttle the lithium ions reduces dramatically (slows down)," Anna Stefanopoulou, director of the Energy Institute and the William Clay Ford Professor of Manufacturing at the University of Michigan, tells Mic. "The high resistance decreases the battery operating voltage sometimes to a level that the phone functionality is crippled." Kent Griffith, a solid-state chemist and postdoctoral scholar at Northwestern University, expands on this by explaining, "The battery is set to operate between a minimum and maximum voltage ... When the resistance increases due to cold temperatures, it requires a higher 'overpotential' to get the lithium ions moving and this can signal to the device that the voltage limit has been reached."

Put more simply, the cold weather makes it harder for your battery to perform and can cause it to simply shut off — even when there is charge left. Even if your phone continues to work through the freezing temperatures, Griffith notes that it will likely be slower and less effective because "the maximum instantaneous power that can be used will also be limited." When you call upon your phone to perform certain tasks, it may simply take longer for it to work up the juice necessary to do it.

If your phone dies, don't freak out

Of course, understanding why your phone seems to freeze up in the cold doesn't prevent it from happening. There is still the very real risk that you'll be out and about during the winter, trying to send a text when all of a sudden, your screen goes black and your phone becomes a very expensive brick. Any time your phone dies unexpectedly can feel like a cause for concern, but fear not: if the cold takes out your phone, it's unlikely to have any effects other than the initial shut down.

"Surprisingly, cold temperature exposure does not typically have negative long-term effects," Griffith explains, stating that phones shutting off in extreme temperatures "is basically a protection mechanism and does not cause damage." Typically, as soon as you return to room temperature, your phone should turn back on without issue and will show no signs of long-term harm. There is a risk that long term, ongoing exposure to freezing temperatures could "freeze the liquid" in the battery and cause damage, Griffith notes, but that is an unlikely situation. Stefanopoulou says, "In fact it is good to store the battery in a cold place," so there should be no harm in a little winter excursion for your device.

That said, not all extreme weather is the same. Heat can actually be quite bad for your phone's battery. "Elevated temperatures have long term consequences that will limit the capacity and power, even when the battery returns to normal temperatures," Griffith states. "The higher the temp, and the more time spent at high temp, the worse the capacity fade and the shorter number of cycles you will get from the lifetime of your battery." So while your phone may be fine for a hike through the snow, you'll probably want to leave it behind — or at least protected — for your next summer beach trip.

How to keep your phone working in the cold

Phone batteries are getting better all the time and are becoming more suited for extreme conditions, particularly improving in cold-weather performance, according to Griffith — something that is accomplished by "tweaking the components in the liquid electrolyte." He also says that research into solid electrolytes that would eliminate liquid in batteries entirely is picking up and could present new opportunities for phone batteries. "The impact is not yet fully clear but these solid-state batteries will likely be less sensitive to changes in temperature," he says.

For now, though, keeping your phone alive in the winter is simply a matter of moderation, patience, and a quick glance at your phone's user guide. You might not be fully aware of it, but there is actually a recommended range of temperatures that you should keep your phone exposed to in order to ensure its performance. Apple recommends only using its iPhone in temperatures between 32 and 95 degrees Fahrenheit (0 and 35 degrees Celsius). "Low- or high-temperature conditions might cause the device to change its behavior to regulate its temperature," the company warned. Android phones may vary based on manufacturer recommendations, but all generally fall within the same range. Griffith recommended between 59 and 77 degrees Fahrenheit (between 15 and 25 degrees Celsius) as an optimal range.

When that isn't possible, as is the case for many people who experience freezing temperatures throughout the winter, then it's simply a matter of keeping your phone warm when possible and picking your spots when using it. Stefanopoulou recommends you "wrap it very well to prevent it from dropping to subfreezing conditions." You can find cases that can accomplish this task for you, including weather-proof cases or thermal bags like Phoozy that promise to prevent your phone from dying due to extreme temperatures. If you want to keep it more simple, though, Griffith says there is no need for accessories. "The best thing you can do for your battery is to keep it close to room temperature. ... In cold weather, keeping it in your pocket near your body is perhaps the best simple fix." That doesn't guarantee that the cold won't do it in if you pull it out of your pocket and expose it to frigid temperatures, but a pocket should be all you need to keep your phone alive even in below-freezing temperatures.