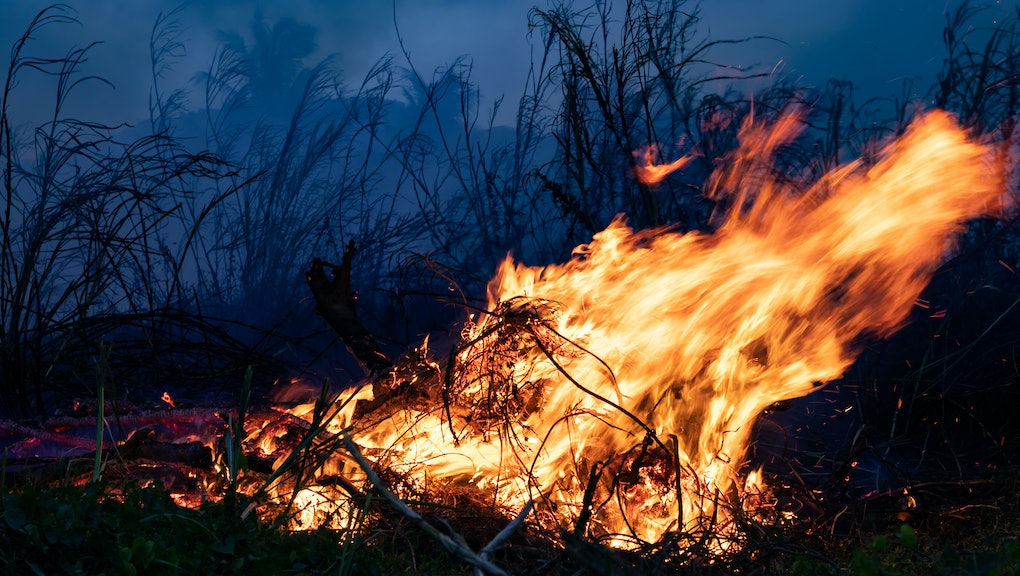 Fires have ravaged precious forested areas around the globe recently, from the devastating flames that raged in California, to the greenery set ablaze in the Amazon rainforest. It's a problem that doesn't seem to be abating – at least not easily. But a new wildfire prevention invention by Stanford researchers that effectively makes forestry and other vegetation fire-resistant could change that.

The invention is a spray gel meant to be applied straight to trees and other vegetation to keep them from catching fire. In addition to being convenient, it's also "nontoxic and biodegradable," according to a research paper in Proceedings of the National Academy of Sciences. Currently, fire-fighting sprays are already in use, but they're only really implemented during emergency situations — i.e. when a fire has already broken out. This new gel would change that plan up significantly, as it would be applied in a proactive manner before fires actually break out.

The gel would be applied to any ignition-prone areas throughout regions that need the extra help to prevent fires, the paper says. The spray would last long enough to help keep fires from sparking even throughout peak season, and wouldn't be affected by traditional weathering that could normally wash away "typical" fire-retardants.

When active fires are going on, firefighters use a variety of different methods to try and quell them. These can include suppressants similar to what's in development, as well as superabsorbent polymers like those you might find in diapers. Unfortunately, they become less effective once the water in each material begins to evaporate, which can happen under an hour's time during typical woodland fire conditions.

The new gel has been deemed rain-resistant by the Stanford research team, who tested the gel on laboratory plants and patches of grass beside a California road with firefighters in tow.

Not only could the gel withstand rain, but it could also stand up to wind, which means it would only really need to be applied one time each fire season. The convenience of only having to apply once as well as the fact that the gel is so resilient is a game-changer for fire prevention, of course. Given that wildfires continue to start and rage on in the same areas over and over, it's simple to predict where they might begin and target those areas with the gel.

"This has the potential to make wildland firefighting much more proactive, rather than reactive,” said Eric Appel, author of the Stanford study at the Stanford School of Engineering. "What we do now is monitor wildfire-prone areas and wait with bated breath for fires to start, then rush to put them out."

"You can put 20,000 gallons of this on an area for prevention, or 1 million gallons of the traditional formulation after a fire starts," said study lead author Anthony Yu, a PhD student at Stanford University. When you put it that way, the choice seems quite simple.

This new gel certainly seems like it could make a huge difference when it comes to the prevention of wildfires, and firefighters agree, especially since this is a radical new addition to the arsenal of tools currently available.

"We don’t have a tool that’s comparable to this," said Alan Peters, CalFire division chief in San Luis Obispo. "It has the potential to definitely reduce the number of fires."

When it comes to keeping humans, animals, and plant life safe from potential fires that could claim their living spaces – and lives – it's worth basically giving anything a try.