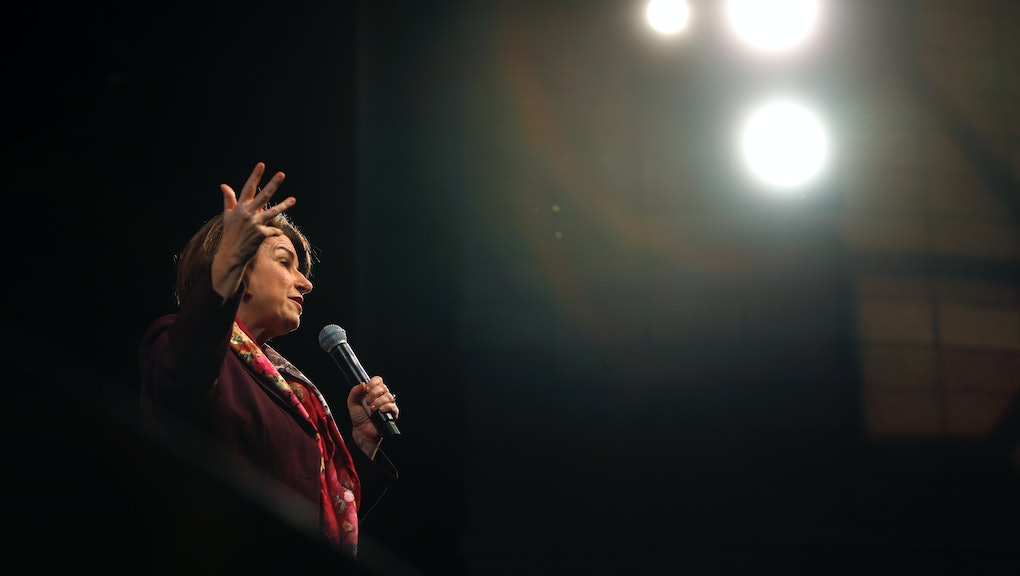 Will Amy Klobuchar's prosecutor past derail her presidential campaign?

When the Associated Press published an investigation earlier this month detailing the bungling of the 2003 case against Myon Burrell, it threw a wrench into Minnesota Sen. Amy Klobuchar's presidential campaign. That's because Klobuchar, then an attorney in Minnesota's Hennepin County, prosecuted the 16-year-old Burrell and later campaigned for Senate on her successful prosecution as evidence of her being "tough on crime." Burrell, who is Black, was convicted of the murder of 11-year-old Tyesha Edwards, but now AP has called into question the validity of the county's investigation given the police's use of jailhouse informants — in addition to the fact that another Minnesotan, Ike Tyson, has confessed to the murder for which Burrell is currently serving time.

The now-33-year-old Burrell has always maintained his innocence. In light of the renewed scrutiny of his case, Black Lives Matter Twin Cities and the Minneapolis NAACP are calling for Klobuchar to suspend her campaign for president because of her role in securing Burrell's conviction. And with the Midwestern senator surging to a surprise third-place finish in the New Hampshire primary last week, the newfound attention on her prosecutor past has the potential to thwart any momentum she may have.

Edwards was killed in 2002 when she was struck by a stray bullet while doing homework at her kitchen table. AP uncovered faulty prosecutorial practices in the case against Burrell, such as paying witnesses for testimony, refusing to pursue critical information, and a lack of gun, fingerprint, or DNA evidence of Burrell's guilt. There are also claims that additional evidence such as surveillance tapes and alibi witness testimony went unreviewed. On top of that, co-defendants in the case — most notably Tyson — have said that Burrell was not even present when Edwards was killed.

When pushed to account for the inconsistencies in the investigation, Klobuchar responded that any new evidence needs to be immediately reviewed. "I’ve called for the office and the courts to review the evidence,” Klobuchar said on The View last week in an interview with host Sunny Hostin, herself a former prosecutor. “I think you know," Klobuchar told Hostin, "I care so much about justice, and this case must be reviewed.” Klobuchar has been further criticized for the fact that she did not allow Burrell to attend the funeral for his mother — who died in a car accident one month into the investigation of Edwards's death, before Burrell was convicted — saying that he was a threat to society.

This isn’t the first time that Klobuchar’s prosecutorial record has been questioned by voters, especially Black and brown voters. As a prosecutor, Klobuchar fought for harsher penalties for young people, at one point prosecuting over 400 school-related incidents in one semester, and she has in the past relied on faulty theories on crime prevention, most notably defending the "broken windows" ideology, which posits that low-level non-violent crime like graffiti inevitably leads to violent crime. Klobuchar's campaign did not respond to a request for comment from Mic.

Klobuchar's prosecutorial legacy and potential targeting of minority communities has invited criticism from across the country. In a Facebook post, the Des Moines arm of the NAACP mirrored the Minneapolis civil rights organization's calls, saying, "As Black Iowa residents working towards racial justice and equality, we stand in solidarity with the Minneapolis Branch of the NAACP in calling Sen. Klobuchar to answer publicly for her role in the prosecution of Myon Burrell."

The calls for Klobuchar to suspend her campaign, however, come at what might be her strongest moment in the race to date. After her third-place finish in New Hampshire — buoyed in part by her acclaimed debate performance a few days before — Klobuchar raised $2.5 million in four hours and $12 million in just a few days. Her campaign has also announced a seven-figure ad buy in Nevada and just hired an operations director in the state, where Democrats will caucus for their preferred candidate on Feb. 22.

As Klobuchar scrambles to build up her campaign apparatus in upcoming voting states, hoping to capitalize on her showing in New Hampshire, it's worth asking whether she'll be able to extend her appeal to the less heavily white populations that are about to cast their votes. A Quinnipiac poll from earlier this month found Klobuchar polling at 0% with Black voters nationally — an all-important Democratic voting bloc that will have significant influence in the South Carolina primary later this month. Meanwhile, Klobuchar has been campaigning for the sizable Hispanic vote in Nevada — mostly by reversing many of her previous stances on immigration, including disavowing previous support for English as a national language and increasing the number of Customs and Border Protection agents.

The Burrell case may be putting a spotlight on one aspect of her record, but as just one piece in a much larger puzzle, it remains to be seen if the senator can turn the tide with Black and brown voters.

More like this
Supreme Court justices' political leanings: A guide to the 2021 court
By Vanessa Taylor
There are already 19 QAnon candidates running for Congress in 2022
By Rafi Schwartz
The history of the LGBTQ+ Pride flag, from the OG rainbow to Progress Pride
By Vanessa Taylor
Stay up to date