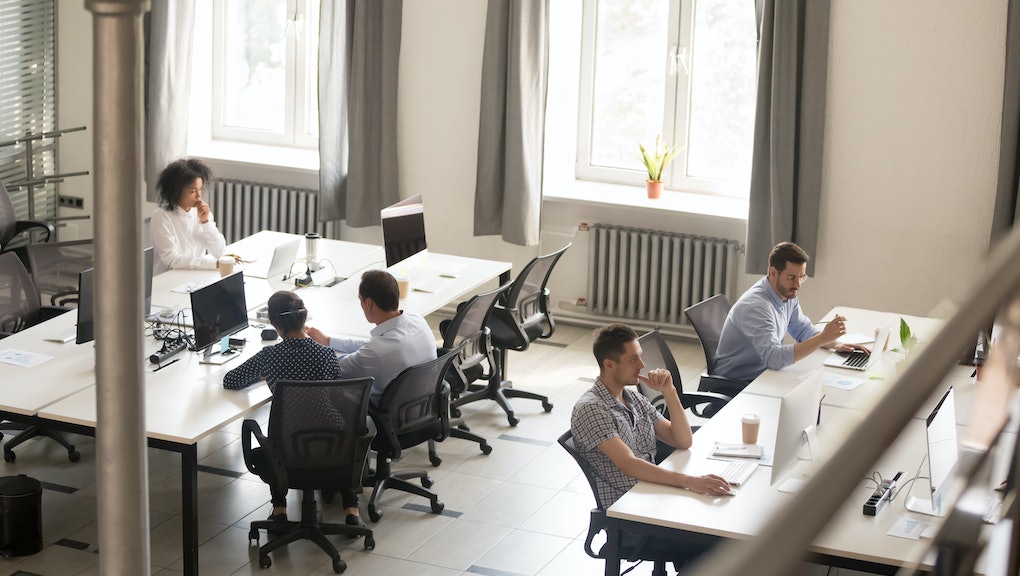 Open offices are one of the most misguided and maligned "innovations" of the modern workplace. While many businesses believed removing walls and cubicle arrangements would increase productivity and communication among employees, open floor plans have instead resulted in less face-to-face interaction, sensory overload that can leave some feeling overwhelmed and unproductive, and subtle reinforcement of sexist attitudes. Most employees hate open office arrangements, yet they persist in as many as 70 percent of workplaces, according to International Facility Management Association data.

While employee opinions and productivity might not be enough to change the shape of the modern office, coronavirus just might do the trick. In addition to creating what seems to be a worse work space, many health experts have warned that open office setups can exacerbate the spread of communicable diseases. Numerous studies have shown that workers in open office buildings take nearly twice as many sick days as those in private offices and cubicles. Wall-free offices have also been associated with "sick building syndrome," which can result in respiratory problems that can in turn lead to the spread of viruses.

Work after the outbreak will not simply go back to normal, as the virus won’t completely disappear and the potential for additional flare-ups will likely be with us for the foreseeable future. To get a better idea of what a return to the office might be like, Mic spoke with Dr. Georges Benjamin, MD, the executive director of the American Public Health Association and former Secretary of the Maryland Department of Health and Mental Hygiene.

Mic: What were your general thoughts on open office arrangements prior to coronavirus?

Dr. Georges Benjamin: Obviously if you have a lot of people working in an open office area, there's always a risk of infectious diseases that are airborne, in particular. Obviously, people share lots of stuff. So you have lots of common areas. During the normal flu season, it certainly goes through an office if you don't make sure that all your staff in the office are all immunized from the flu and people are washing their hands frequently. Having good protection, covering up your nose and mouth when you cough and sneeze, not sharing utensils — these are generally good work practices. But the diseases that we're spreading around are not generally lethal. Flu can be, of course, but usually not anything like what we have with COVID right now.

Do workplaces, and open offices in particular, present an increased risk of spreading a virus like COVID-19?

GB: They're on the list of many places that people can get infected, which is why we sheltered at home. But so is the bus, and so is a train station, and so is the grocery store and family members, etcetera. I think the commonality is the fact that people are cohabitating in a particular place where they're working or going to church or recreating at barbecues and birthday parties, all those kinds of things. Anytime you get a bunch of people together with a disease like this that is spread primarily by reasonably intimate contact, if you bring someone who is infected into that environment, then people are going to get infected. There are ways as we look forward to try to reduce this, and we're probably going to have to as we begin to return to work.

Have employers and organizations been in contact with health officials to help reorient businesses as people start to return to work?

GB: There are a lot of companies talking about it. We expect more telework. Now that we've learned we actually can telework, we're probably going to do more of it. Companies are probably going to be spreading out work schedules. Staggered work schedules are probably going to become more frequent. We'll be looking at ways to decompress elevators, decrease the number of people going on an elevator and in enclosed spaces at any one time. Probably a lot less handshakes, more masks... at least for now. They will be closing common areas, so probably less lunchrooms — or at the very least further spreading out the tables.

We'll need to reconfigure the workspace in a way that spreads people out. If you have two people, for example, working in a cubicle, you might look at staggering their work hours to not have them working at the same time in the same space. Putting up more dividers. There's been a trend in many offices over the last few years to not put dividers between people. You may see them return in some places. You'll probably see smaller conference rooms. I can tell you in our offices, we've got one big conference room that we use for a lot of meetings that is probably going to be bifurcated. We're going to have smaller rooms and not as many people in those rooms at the same time. Anything that we can do to reduce the number of people around one another at any one time.

Do you foresee offices ditching the open office design and returning dividers and cubicles? Is that enough to combat the spread of a virus?

GB: If you have two people sitting down across from one another all the time, dividers certainly could help. My personal view is that people need to be more diligent about not coming to work when they're sick. That includes having paid sick leave for people so they don't have to come to work sick. That is a probably more effective tool, as well as making sure that people get their flu shots.

These are all changes that businesses might make in the short term, but do you expect that coronavirus will stick in people's minds and result in long-term changes in the workplace?

GB: I think the workplace will change. How much it changes remains to be seen. I think making sure people get more flu shots, better respiratory hygiene, and hand hygiene will probably become standard. People will probably tend to wash their hands more. Changing people is very tough, but I suspect things like that will continue.

I suspect at some point we'll go back to larger meetings because we have to, particularly outside of an infectious disease environment. But this disease will go away and people will want the threat to be over and will begin to return to some normality, but I suspect not all of it.

Are some of these changes things that we should have been doing anyway? A pandemic may not be the ideal way to get there, but is it possible this will lead to better overall health outcomes?

GB: COVID is a terrible way to get there, but we hope that it will improve our hygiene. Will we see reductions in the seasonal flu and common cold? I don't know, but it would be nice to see that happen. If we saw a reduction in infectious diseases that are spread by people and if our hygiene gets better, that can't hurt. Are we going to go back to having buffets? Absolutely. At some point, are we gonna go back to having large meetings again? Yeah, absolutely. But I think people will be more cautious about sitting too close to one another, and there may very well be some major changes to things like airlines and trains and things like that. Places where people were too much on top of one another anyway.