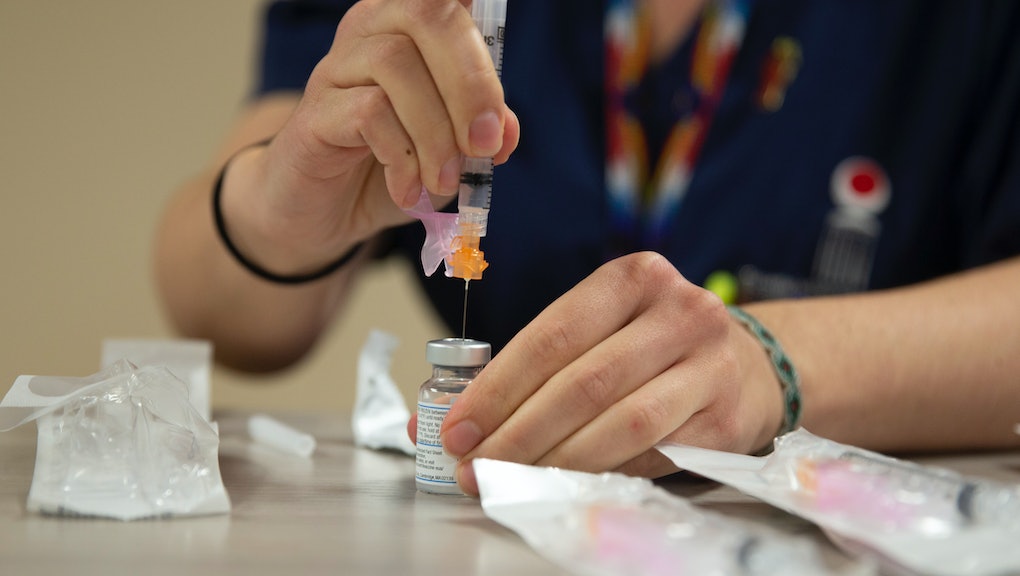 The U.S. has been trying a number of strategies to move the needle on vaccination rates since they've plateaued, since the Delta variant is clearly contributing to a rise in COVID-19 cases. Some companies have mandated vaccination for employees, while some state and local governments have offered cash, cars, and even guns as incentives to get the shot, in what feels straight out of an episode of Black Mirror. Now, the FDA is facing pressure to grant full approval to the vaccines available in the U.S. under the agency’s emergency use authorization, the Washington Post reported, with some experts arguing that doing so will alleviate concerns among the vaccine-hesitant. Could full approval of COVID-19 vaccines really convince more people to get the jab?

A little context on the approval process: The FDA granted the Pfizer, Moderna, and Johnson & Johnson vaccines emergency use authorizations (EUAs) — essentially, temporary permits for public health emergencies. An EUA is different from a full approval, which would stay in effect indefinitely, unless a problem with the vaccine were to arise. Peter Marks, director of the FDA’s Center for Biologics Evaluation and Research, told the Post that a full approval requires the review of way more data than for an EUA, as well as a more detailed manufacturing process and additional inspections of facilities.

Marks couldn’t specify when the FDA would grant the vaccines full approval. “We are going to move with all due diligence to get the review done with our usual high quality, as rapidly as we can,” he told the Post. He added that the agency tries to finish priority vaccine reviews within eight months of getting an application for approval.

Pfizer and BioNtech submitted a request for full approval of their vaccine in May, the newspaper said, while Moderna started a rolling submission in June, and Johnson & Johnson announced plans to submit an application later this year. The FDA could give Pfizer full approval by late summer or early fall, some officials have said, per the Post.

According to STAT News, critics of the FDA have accused the agency of delaying full approval of the vaccines, which they argue is worsening hesitancy among those who still see them as experimental, even when the data so far overwhelmingly points to their safety and effectiveness.

And indeed, a recent Kaiser Family Foundation poll found that 31% of unvaccinated adults would be more likely to get the jab if the FDA granted full approval to one of the currently available vaccines. One reader who wrote in to Bloomberg’s Covid Q&A described how their brother had held off on getting the vaccine as he awaits full approval.

It doesn’t help that far-right conspiracist Rep. Marjorie Taylor Greene of Georgia and her ilk continue to fan the flames of this distrust. Per STAT News, Greene recently accused Biden of “pushing a vaccine that is NOT FDA approved.”

That said, Marks agrees that more people will get the vaccines if the FDA gives them full approval. He told the Post that he’s received emails from politicians, providers, tribal chiefs, and others saying they’re “really uncomfortable with an experimental vaccine. This EUA thing sounds really weird to them. They want an FDA-approved product.” Even if some government agencies, universities, and companies have already mandated the vaccines, full approval might make other entities more comfortable about requiring them, the Post pointed out.

But STAT News noted that granting the vaccines full approval in order to ease fears about them could backfire by raising questions about the FDA’s credibility. “The people who have concerns won’t be reassured by something that looks like a hasty approval,” Dorit Reiss, a law professor at the University of California, Hastings, who looks at vaccine issues, told the outlet.

Céline Gounder, a physician and epidemiologist who advised President Biden’s transition team on the pandemic, noted that this is especially true of people in red states who didn’t support Biden’s campaign and remain wary of his administration — the largest group of unvaccinated people in the U.S., according to STAT News.

Delta is spreading as we speak, and the more people remain unvaccinated, the longer they'll be vulnerable to this scary variant — and the higher the chances that another, potentially more worrisome variant, will rear its ugly head. Whatever the strategy to nudging the vaccine hesitant, we need to set it in motion quickly.