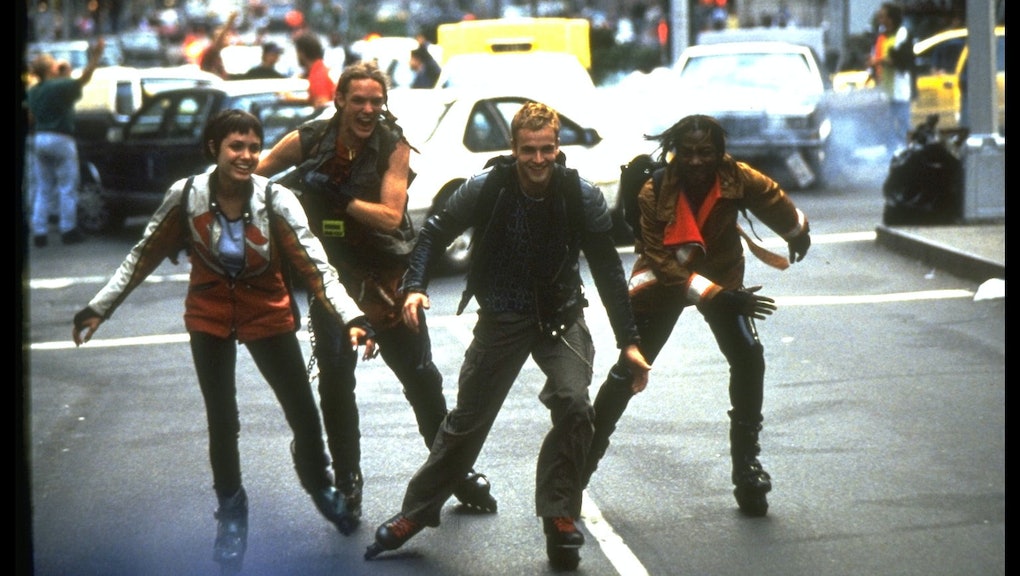 Will social distancing bring back rollerblading?

I can’t say for sure when it started, but for the past several months I’ve gotten the distinct feeling that rollerblades were, for lack of a better term, “coming back.” It’s possible that I’m more acutely aware of the presence of these eight-wheeled commuters than most. As a skateboarder for the better part of 15 years, any individual traveling with the assistance of wheels catches my eye. Especially those ridiculous motorized monstrosities urban dwellers seem unashamed of riding in public these days.

Anyway, even before the coronavirus pandemic turned once busy streets into ghost towns, rollerblade nostalgia seemed on the rise. On Instagram, friends posted inquiries about where to find skates before eventually posting dispatches from their rides around Brooklyn. I noticed a food delivery person rushing through Manhattan on rollerblades as recently as January. Jezebel recently published a story about roller skating YouTubers. Now, as social distancing guidelines redefine what outdoor activity looks like, the rollerblade renaissance feels imminent.

“During the heyday, you could go to Central Park or Prospect Park and seven out of ten people were on skates,” Joel Rappelfeld, an inline skating instructor who quite literally wrote the book on rollerblading, told Mic. “Now, it’s more like one in a hundred.”

Rappelfeld, a Bronx-native, is currently holed up at his residence in Nyack, just outside of the city, where he teaches after school programs via Zoom. In the 1990’s he was something of a local celebrity, with appearances on morning talk shows and the publication of his book, The Complete Blader. He, too, senses a resurgence on the horizon.

“Now, I’m feeling that this is going to be the next generation of inline skating because people will need ways to get places that are not public transportation,” he says. “The city has become more bike-friendly which means there are more safe places to skate. Since we have a protective lane to enjoy the sport.”

Outdoor exercise has become a flashpoint of controversy in the wake of social distancing guidelines around the country. Viral photos of seemingly crowded parks and of runners not wearing masks have become a new front line in the endless culture war. New York Mayor Bill de Blasio has pledged to limit crowds at some parks and, by most accounts, we won’t be returning to the carefree ways of before anytime soon. It perhaps creates an opening for rollerbladers who, unlike runners, can more seamlessly distance themselves from the people around them.

“Unlike cycling and running, where people are very focused forward, the good thing about inline skating is that you’re going at a different pace and can chat a little bit more and keep it more social while maintaining the [social] distance,” Rappelfeld explains.

Seth Yost, a rollerblader from the Rockaways, agrees. He says he’s been an ardent participant in the sport for about a decade and has noticed a resurgence in interest thanks in part to social media influencers. Now, he thinks it could make for a perfect social distancing activity.

“I do think that skating is a good social distancing practice as you can pretty much skate anywhere, therefore avoiding densely populated areas, of course following the guidelines like wearing a mask and keeping six feet apart is important but pretty easy to do,” he told Mic.

Yonatan Medina, a programmer living in Brooklyn, says he started rollerblading because he saw someone on the street a few years ago and thought he’d give it a try. “I was reminded of how much I enjoyed it back in elementary school. But then everybody switched to skateboarding and rollerblading became embarrassingly uncool,” he said.

Now, he's renewed his interest in the activity. “I’m rollerblading a lot. That’s about the only reason I have for going outside. It’s a great activity for Rona. No cars, no pedestrians. The road is yours, the world is yours.”

There’s something decidedly cyberpunk about rollerblading, too. I can’t help but think of the climactic sequence in the movie Hackers, when the film’s squad of misfits have to make it across Manhattan in record time (soundtracked to The Prodigy's "Voodoo People" no less). They vault over traffic as though the confines of vehicular travel exist only to stifle creativity. They also look really cool.

And a comeback makes perfect sense. Our culture is currently in the throes of nostalgic overdrive, perhaps spurred by the confounding nature of the present, but also the predictable cycle of trends that always happens. When Hackers was released, in 1995, the activity was at its peak. You could argue that it was only a matter of time before kids would decide to strap on a pair of skates again.

Rappelfeld sees a similar hope in the future. He says while his students enjoy the Zoom-modified nature of their after school lessons currently, he's looking forward to being able to teach lessons again. Socially distanced lessons, that is.

“Keeping people separated. But together, at the same time,” he says.

More like this
Malika Andrews isn’t just a Band-Aid for ESPN. She’s brilliant in her own right
By Keith Nelson Jr.
How many times must victims relive their trauma in the Larry Nassar case?
By Chloe Stillwell
Colin Kaepernick's new Netflix documentary highlights the man behind the icon
By Keith Nelson Jr.
Stay up to date