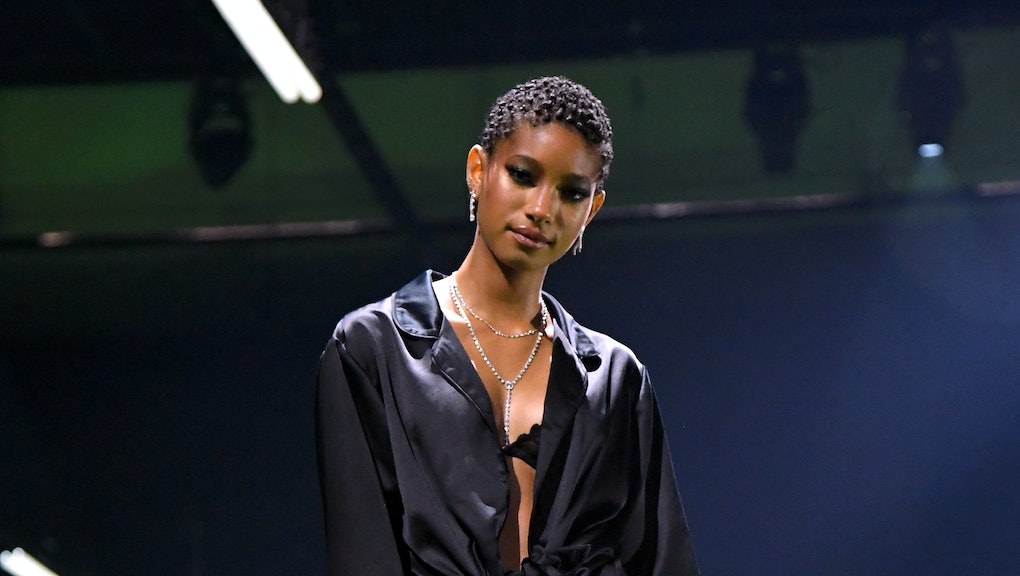 Trying to box Willow Smith into a hairstyle, let alone a genre of music, just leads to her cutting her hair off in defiance and rocking out however she wants. In a recent cover story interview for V Magazine, Smith opened up about how her creative freedom wasn’t born from overwhelming support, but rather a history of fighting longstanding racist stereotypes against Black artists and the bullying she faced in her childhood. It’s the latest example of how “white people’s music” doesn’t exist, but racism does.

During her chat with Alexis White, a Black woman who was lead singer of Tennessee-based metal band Straight Line Stitch, Smith addressed the added pressure that metal culture places on Black people who want to participate. She draws a direct connection between that metal culture and the racist treatment she received from her peers as child for her musical tastes. “I used to get bullied in school for listening to Paramore and My Chemical Romance,” she said.

Smith has often credited her mother, Jada Pinkett-Smith, being the lead singer of heavy metal band Wicked Wisdom as a catalyst for her pursuing her own interests in the genre. But, during her interview, she revealed her mother’s heavy metal career also exposed her to the racism lodged at Black people in the space at an impressionable age. “She actually got lots of death threats. It would be mostly through letters, though. When she was on stage, people would say violent things and throw shit at her,” Smith revealed.

Demonstrating the depressingly universal experience of Black women in the metal genre, White recounted a time a group of neo-nazis shouted the N-word at her forcing her to run off stage, embarrassed, and in tears. Unfortunately for Smith, the racist stratification was also imposed by Black people as well. Speaking on her Red Table Talk show on Facebook with her mother and grandmother back in October 2020, Willow pointed out how her and her brother Jaden felt shunned by the Black community for being “too different.” Their mother even said she heard criticisms about Jaden’s fashion choice of wearing a skirt because to some it’s not the attire of a “typical Black man.”

Neither White nor Smith explicitly calls metal music “white people’s music,” and that phrase also wasn’t mentioned in the Red Table Talk chat. But, it’s strongly implied in the subtext of those discussions, and a phrase every Black person who ever unapologetically played air piano to Vanessa Carlton’s “A Thousand Miles” has heard. It’s a pejorative phrase that has gone from offensively narrow-minded to downright idiotic in today’s landscape of music.

The Billboard Hot 100 hit song that spent the most weeks ever at #1 was “Old Town Road,” a country song from Lil Nas X, a young Black artist. Yes, arguably the biggest song in the history of a predominantly white genre was made by a gay Black boy. Black and white kids alike packed JuiceWRLD’s shows and streamed him into a legacy more senior artists have never experienced, largely based on the success of his biggest hit “Lucid Dream,” a song that sounds more like a punk rock song on acid, and may or may not have been inspired by pop-punk group Yellowcard’s “Holly Wood Died.” This is not a result of Black people liking white people’s music. This is a result of people liking good music.

The truly insidious part of the phrase “white people’s music” is how colloquially accepted it is in popular culture. There’s a Spotify playlist with over 100,000 likes named “Songs That Never Fail To Make White People Beyond Turnt.” Nick Cannon’s second album was named White People Party Music. Then, there’s the fact that many of the genres of music people associate with “white people’s music,” such as Rock and country music, have founding ties to either African American musicians or African culture directly. Willow Smith’s music shouldn’t be confined to her skin color, and we’re lucky the specter of “white people music” didn’t limit her creativity.

More like this
Colin Kaepernick's new Netflix documentary highlights the man behind the icon
By Keith Nelson Jr.
The bittersweet success of 'Shang-Chi' after a year of pandemic-fueled Asian hate
By Brandon Yu
Even in death, Michael K Williams was, and still is, Brooklyn for life
By Keith Nelson Jr.
Stay up to date