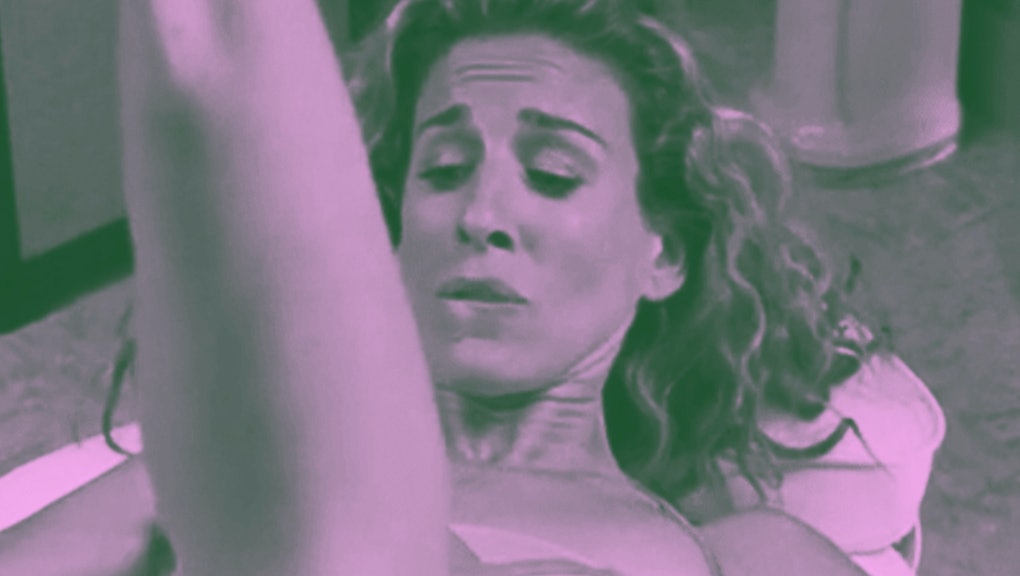 Imagine if Mona Lisa was painted with a mustache. Imagine if when Marilyn Monroe's skirt flew up in The Seven-Year Itch, she had hair on her legs. Imagine if when Pamela Anderson bounced down the beach in slow motion on Baywatch, you could see a few stray pubes. It'd be weird, right? Had these women had body hair, the pictures would have taken on an entirely different meaning. It would have been about them not abiding by whatever body hair rules were in place at the time.

But obviously it wasn't always this way. The history of women removing their body hair is steeped in misogyny. It's never been easy being a woman, especially when looking back at the gender's history of conforming to hair-removal standards.

Cavewomen had it tough

Contrary to how cavewomen and cavemen are often depicted — almost entirely covered with hair, looking like a bunch of hairy hippies — archaeologists have come to believe that they were the first ones to embrace shaving. Unlike now, though, shaving wasn't for vanity's sake, it was for safety.

According to History Undressed, both men and women during the Stone Age often shaved their heads and faces so their opponents in battle wouldn't have the advantage of grabbing onto anything. It was also to prevent their chances of frostbite.

However, since this was thousands and thousands and thousands of years ago, before any modern civilization could really be established, shaving really sucked. Shaving meant taking a stone, whittling it down to a sharp angle, and sliding the stone down your face. To get the smaller stuff, they'd use shells like tweezers. No wonder they only lived to be 25 years old.

It only took a few more thousand years to understand that sharpening rocks just wasn't going to cut it. In the ancient Egyptian era, men and women finally improved how to take care of their body hair — all of it.

Throughout Egypt and Mesopotamia during this time, it was common for women and men to remove all of their body hair (except for their eyebrows) to allude to cleanliness, and conform to a beauty standard (sound familiar?) set by women like Cleopatra.

Of course, people got creative. Among the most popular tactics to remove hair in Egypt were tweezers made from seashells, pumice stones and even beeswax and sugar-based waxes, which they'd apply and rip off with fabric just like we do today. According to the Encyclopedia of Hair, copper razors dating back to 3,000 B.C. were found among ruins in Egypt and Mesopotamia too. There's also evidence that women in Turkey used homemade pastes to remove much of their body hair.

Women of the Roman Empire made body hair a class issue

Wealthy women during this era took to removing all their body hair with pumice stones, razors made from flint, very scary-looking tweezers called "volsellas" and depilatory creams, according to Elle. Men, on the other hand, were free to wear their body hair however they liked.

And similarly to Egyptian society, pubic hair was seen as uncivilized to people in the Roman empire and Greece, with young women being subjected to the volsella the second pubic hair appeared. So, now you know why many paintings and sculptures of women during this era were sans pubes.

Thanks to Queen Elizabeth I, women in Europe didn't have to worry about shaving their legs

Before Natalie Portman was giving us all eyebrow envy, there was Queen Elizabeth I in England, who ruled during the Elizabethan era in Europe from 1558 to 1603.

Since she was the queen, she was capable of setting trends, and according to her, the hair on your face should be groomed. That meant eyebrows had to be shaped, and mustaches should be removed, much like today. Leg hair and pubic hair, though? Don't worry about it.

There was also a trend to remove the hair from the top of your forehead, which would make your face appear longer. Mothers were said to have rubbed walnut oil and, in some cases, cat poo, to prevent hair growth on the forehead of their daughters.

At last, women could do what they wanted with their body hair — for a limited time, that is.

The 1700s ushered in the first real straight razor, which was created by Jean Jacques Perret. It was originally for men to use on their faces if they wanted to, but women would use it as well. This was one of the few times in history when there wasn't one single beauty standard dictating how women groom their own body hair. God bless.

Then, the 1800s brought an even safer razor created by King Camp Gillette (who wasn't actually a king; it was just his name). Although razors were getting progressively safer, they wouldn't be marketed toward women until decades later.

In the early 1900s, fashion pressured women into shaving their armpits

The first safety razor specifically for women finally came into existence in the early 1900s, and sparked a movement.

In 1915, Gillette created the Milady Décolleté, which launched what's known now as "The First Great Anti-Underarm Hair Campaign." This campaign suggested to women that now that they have these razors, they should use them on their armpit hair.

In ads for hair removal, women were now urged to remove "objectionable hair" from their bodies — namely their underarms. That particular area first got attention because sleeveless dresses were becoming increasingly popular by the 1920s. In an ad that appeared in Harper's Bazaar in 1915, which was uncovered by Refinery29, completely bare underarms were a "necessity."

This stands as one of the first instances of fashion directly affecting how women shave their body hair.

And then fashion and World War II forces women to shave their legs too.

Fashion of the the 1940s and 50s coupled with World War II meant that American women were more and more encouraged to start shaving their legs for the first time ever.

During the war, there was a shortage of nylon, so women couldn't wear stockings every day. That meant having to go bare-legged and, to be deemed socially acceptable, women shaved their legs. Previously, some of the only women who shaved their legs were dancers, whose legs people were obviously paying a lot of attention to.

By the time the 1950s came along and skirts got higher and therefore more people were seeing more leg, shaving legs and shaving armpits and tweezing eyebrows (thanks to Hollywood starlets) grew more common.

Of course, amid this tremendous upheaval, men didn't have to shave a goddamn thing.

By the 1950s, women had already learned that they should start shaving their legs and their armpits, and tweezing their eyebrows to get a perfect arch. So, why, oh why, did we start caring about pubic hair? Had we not suffered enough?

Truth is, people have cared about pubic hair for a while. With the birth of the bikini in 1946, the stage was set for women to start trimming up down south. While the 1960s and 1970s encouraged a wilder bush, the 1980s and '90s encouraged more of a trim — or, in some cases, a complete trim.

During this time, images or video of women's shaved mons pubis were being widely distributed, either through pornography or fashion photography, and women started giving it more thought.

At this time, Brazilian wax hit the mainstream. The first salon offering a complete wax came stateside in 1987, and from then on, the practice traveled mostly through word of mouth. Soon, actresses like Gwyneth Paltrow were talking about it and, in a scene in Sex and the City circa 2000, even Carrie Bradshaw gets one.

What makes this era not as sexist as, say, ancient Roman times is that it wasn't like women were being told that if they didn't shave or wax, they'd be deemed unclean. It's just that pop culture often showed more and more women with no hair down there during these years.

Men, however, certainly weren't encouraged to get Brazilians — yet.

Now, women finally have options when it comes to body hair removal

In a stark contrast to the '80s and '90s, women are now talking about their body hair more than ever before — and making their own individual decisions as to what to do with it.

You can blame it on the thousands of years women have been told what to do with their body hair, or on the internet, which has given women a platform to form their own narrative when it comes to body hair grooming. Men and rich leaders no longer have any power at all.

Now, women can go without shaving their armpits, glitter bomb them, and then post a celebratory picture online. Women can talk about the choices they have when it comes to pubic hair. Celebrities themselves — from Miley Cyrus to Madonna — are trying to promote the idea that you can do whatever you want with your hair, and that's pretty exciting. What's also exciting here is that men are talking about their options too, like when Billy Bush showed the world that men are now getting Brazilian waxes too.

After thousands of years of women being told what to do with their hair, we've finally reached a point where we're not only free to, but celebrated, for doing whatever we want with it. God knows we've earned it.

This article was originally published on Aug. 12, 2016

More like this
Amazon wants to legalize it
By Melissa Pandika
An anti-vaxxer decided to come to work in blackface, comparing her "plight" to that of Rosa Parks
By Melissa Pandika
This anxiety study is a really passive-aggressive reminder that wealth equals happiness
By Ian Kumamoto
Stay up to date