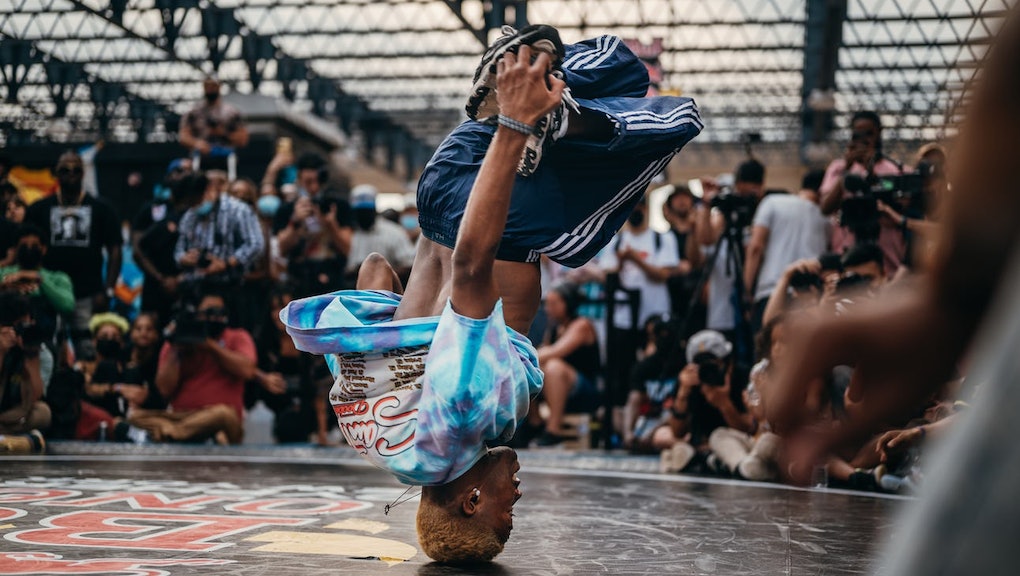 Breakdancing is the most popular element of hip-hop which still resembles its 1970s start. Breakdancing cyphers still feature DJs scratching breakbeats, Kangol hats in the audience and dancers shuffling their feet like they're in hip-hop's earliest film Wild Style, released in 1983. When the Olympic Games take place in Paris, France in 2024, hip-hop history will be made as breaking will be an official Olympic competition for the first time in the artform's 40-plus year history. For 17 years before the international Olympic Committee (IOC) recognized breaking as an Olympic sport, Red Bull has been putting on intentionally revered breakdancing competitions called Red Bull BC One Cyphers. Before breakdancing had its Olympics spot, Red Bull gave it its Super Bowl.

"We have the raw events that are just community-based. But, then we have something like this, which becomes the Super Bowl. This is the place where we can take those kids who are raw in the cyphers and bring them to a place to shine for everyone to see," 39-year-old breaking legend Omar "RoxRite" Delgado Macias told Mic.

This year, Red Bull held two BC One Cyphers in New York and Los Angeles on July 24 and July 31, respectively, crowning two B-Girls and two B-Boys regional champs with an opportunity to compete at the national finals in Orlando on August 19-22. Mic traveled to those two cyphers to get a glimpse at what a breakdancing Olympics could look like.

Road to the Olympics

Even for an artform with decades of history as a key component of hip-hop, arguably the most influential genre of music over the last 30 years, getting it to the Olympics took education, dispelling stereotypes and, interestingly enough, ballroom dancing. Before making its official Olympics debut at the 2018 Youth Games in Buenos Aires, International DanceSport, the global governing body of all dances, unsuccessfully attempted to get ballroom dancing accepted into the Olympic Summer Games after the organization was recognized by the International Olympic Committee in 1997. After rebranding as the World DanceSport Federation (WDSF), breaking was the furthest thing from their minds. But former IOC member Jean-Laurent Bourquin advised the organization that breaking could be their best shot to get into the Olympics, due to the IOC's desire to attract a younger demographic of people who would normally not watch the Games. The way the WDSF saw it, break dancing would be the trojan horse to get other dances into the Olympics.

After Bourquin discussed breaking's inclusion with IOC members at the 2016 Rio Olympics, the WSDF relocated headquarters from Barcelona to Lausanne, Switzerland, where the IOC is based. Break dancing was integrated into the 2018 Youth Games and attracted larger social media numbers than any other sport, leading to the IOC's approval of it as an official Olympics sport on December 7, 2020. Yet, during the process, the breaking community had a similar existential crisis with its underground art being buoyed to mainstream acceptance as the skateboarding community, which was also added as an Olympic sport the same time as breaking and debuted at this year's Olympic Games. Much of the disagreements centered on one question: Is breaking a sport or an art?

“It’s an artistic sport. Boxing is a sport. You see a guy in his training gym, you can tell he’s a great fighter by his movements, actions and how he carries himself. With breaking, you are the sportsman," B-Boy G-Wiz told Mic.

The idea of artistry precluding athleticism in breaking is almost instantly disproven by the end of the first round in any Red Bull BC One Cypher. The 31-year-old B-Girl Marta took home the women's title at the New York cypher with this complex train of moves: sitting with her right leg crossed over her extended left leg, into pulling her right foot behind her back, into rolling over on her stomach while still holding her right foot behind her back, into flipping her body into a leg windmill — all in the matter of six seconds. You're both dazzled by the beauty of the movements, and the body control to seamlessly transition between moves the average person could probably never do individually, let alone in effortless sequence. Falling in love with breakdancing 14 years ago in South Russian city Rostov-on-Don, Marta exemplifies the international reach of Red Bull BC One cyphers which makes it the perfect breeding ground for future Olympic talent. “In Russia, breaking is huge and amazing," Marta told Mic. "When Red Bull came to Russian breaking, it was huge and prestigious from the start."

Mace "Bboy Mace" Maya won the men's title at the Los Angeles cypher at the age of 17 years old by windmilling his legs while he spun on his head, spinning his entire body in mid-air, and supporting the entire weight of his body on just his elbow. Not only does he also consider Red Bull BC One breaking's Super Bowl, he attained his motivation to pursue breakdancing at 5 years old after watching B-Boy Junior compete a Red Bull's World Finals event. "If you look at Red Bull and you look at the Olympics, they're both worldwide," Mace told Mic.

When you find out the dedication it takes to be a world class breakdancer, you can draw direct parallels to the same work required to be an Olympic athlete. At 39 years old, RoxRite does five grueling training sessions in a week. When 17-year-old Mace isn’t in school, he wakes up at 8 A.M. to work out at the gym for two hours, recovers at home with ice packs, teaches young aspiring breakdancers, and then trains for two hours afterwards. When he is in school, as he was a week after winning his first breakdancing Super Bowl, the running starts at 5 A.M. The New York cypher men's title winner Frankie practices four days a week, including breaking for an hour and sometimes doing the same back-bending moves 20 times in a row until it's muscle memory.

“It’s highly likely the first Olympic gold medalist will come from a Red Bull BC One cypher because it’s the most prestigious solo battle in the world. So, if you win BC One, you really are a top contender for the Olympics," Frankie told Mic.

Getting breaking in the Olympics was the first hurdle. The next and arguably more important hurdle is fitting a counterculture, spontaneous, communal breaking experience into the Olympics's rigid structure. Unlike any other Olympic sport, the athletes in breaking compete with the crowd encircling them, as a host on the mic hyping up the action while the athletes feed off the energy off of it all. An easy fix would be to simply have that same crowd encircle them but the energy of the live DJ scratching and the host would surely be replaced with pre-planned music and TV announcers breaking down the moves rather than yelling at the breakdancers to give it their all. Then, there's the question of how prominently the Olympics will feature breakdancing's inextricable tie to the history of hip-hop in the competition.

You'll never see more Kangol hats and Adidas sweatsuits, the fly uniform of the earliest breakdancers of the '70s, than at a Red Bull BC One cypher or any breakdancing cypher. The catalyst for the breakers’ hip-hop gymnastics are break beats and sample flips Eric B and Rakim would rock over to have any house party turned upside down. No matter your age, if you’re at a Red Bull BC One cypher, you will become immersed in breakdancing's history whether you care to learn or not. The New York cypher took place on the rooftop of Seward Park Campus, a vertical campus housing five separate schools in the Lower East Side neighborhood of New York City, the walls lined with nostalgic graffiti from Rooftop Legends, a program showcasing the timeless work of graffiti and street artists. In the middle of the competition, B-Girl legend and breakdancing griot Ana "Rokafella" Garcia wanted to make sure those in attendance knew the historical significance of where they were standing. Before it was Seward Park Campus, it was Seward Park High School where early breakdancers like Scrambling Feet and Valentin "Float" Becerril.

"What we're doing is a tradition. What we're doing is folklore. We're making sure we don't forget the trials and tribulations of that first wave that stepped forward and said, 'We are awesome,'" Garcia said during the event. "A lot of these people dancing against each other are part of a generation. Every five years, I've witnessed a turnover with new faces. We need more people to take up this torch and carry this legacy."'

Breaking's debut in the Olympic Summer Games in 2024 will feel like a hollow victory if the IOC doesn't tangibly support the culture of the newly added sport and its competitors. Regardless of each Red Bull BC One competitor's personal opinion on breaking's inclusion in the Olympics, each one adamantly hoped the Olympics is able to open doors for breakdancers supporting their lives strictly by being a breakdancer. Marta hopes "the Olympics can make it possible for dancers to continue to be adults," explaining most break dancers work other jobs to support themselves.

“It’s hard to make a living even if you are at the highest levels of the dance. What I’m looking for the most from the Olympics is it creating more opportunity for B-Boys to sustain themselves solely with competing,” Frankie said.

Breaking isn't legitimized by an Olympic inclusion, it was already legitimate enough for countless young people to dedicate their lives to bending their bodies to the rhythms of hip-hop's forefathers. The Olympics inclusion is the long overdue respect breakdancing has deserved for decades and Red Bull helped give.