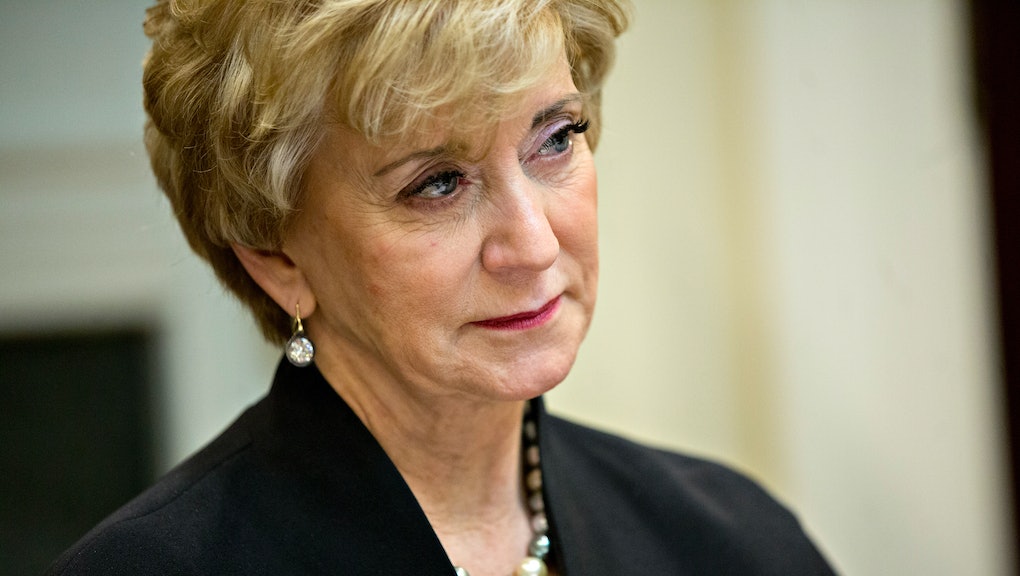 In the months leading up the presidential election, Qanon conspiracy theorists and Trump supporters have leaned into unsubstantiated claims that the Democrats are part of a powerful ring of pedophiles. Those pushing the accusations avow they are protecting children, but new reports suggest they are ignoring or even covering up, accusations of abuse that happen right in front of them. According to a new report by Business Insider, Linda McMahon, the cofounder of the WWE who is now in charge of Trump’s biggest super PAC, agreed to hire a ring announcer who was a suspected child molester as long as he “stopped chasing after kids.”

Before serving in Trump’s cabinet as head of the Small Business Administration and joining his super PAC America First Action, McMahon ran the WWE alongside her husband Vince McMahon. The duo reportedly allowed Mel Phillips to continue working for the company for years, despite accusations of sex abuse against him by young boys. According to Business Insider, which reviewed hundreds of pages of court records and conducted several additional interviews, the McMahon’s allegedly paid off one of Phillip’s accusers, Tom Cole, $55,000 and offered him a job as a crew member, after the accusations were made public against Phillips in the 90s.

In a statement to Business Insider, WWE attorney Jerry McDevitt said “the only persons implicated were not senior officials, nor were there any claims of anything approximating conventional forms of sexual abuse such as rape, sodomy, etc. Instead [a young former WWE employee] claimed Mel Phillips had a foot fetish and played with his feet. He also claimed that any allegations against the McMahon’s were “classic libel.”

But, a former high-level employee for the WWE told Business Insider the McMahons “clearly knew what was going on, but really did nothing to stop it…” In a 1992 column for the New York Post, Phil Mushnick wrote that Vince McMahon had confessed that he suspected Phillips had an “unnatural” interest in young boys and even fired him, before bringing him back in 1988.

McMahon hit Mushnick with a lawsuit, but in a deposition, Mushnick further described the conversations, where Vince McMahon said he and Linda “had known for some time that Mel had a peculiar and unnatural interest and attachment to children.”

Despite the investigation into allegations of sexual abuse of minors and the illegal transportation of minors across state lines, Phillips nor anyone in the WWE were ever charged. The history of sexual abuse allegations were also never brought during McMahon’s confirmation hearing, even though it had been flagged by the Trump transition team.

The report comes as other conservative movements face reckonings over contradictory claims about protecting children. Mother Jones also released a report today that found that Jim Watkins, the owner of the site 8kun, which has offered Qanon a platform to propel the conspiracy that Trump is fighting a cabal of elite liberal pedophiles, controls a company that hosts domains that suggest they are connected to child pornography.

While Watkins has denied Mother Jones’ findings, the outlet points out that even if the sites aren't actively hosting child pornography, according to their research he is apparently “profiting from words that appeal to the real thing.”