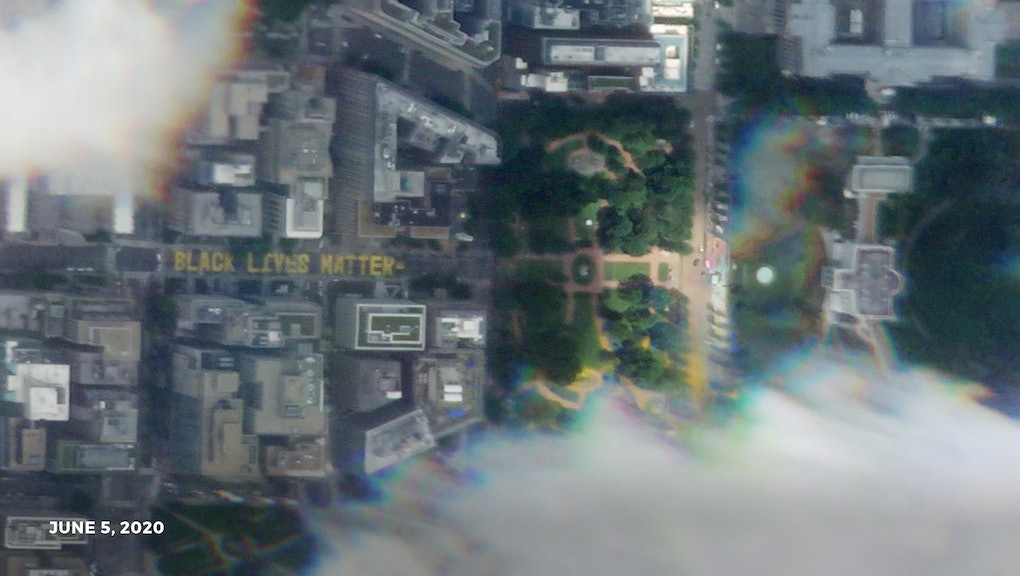 You can see D.C.'s Black Lives Matter mural from space

Last Friday, Washington, D.C. Mayor Muriel Bowser commissioned a Black Lives Matter mural across two blocks of 16th Street in the nation's capital. Images of the yellow text on the street leading directly to the White House quickly started making the rounds on social media, but the image appears to have a reach beyond the terrestrial. New satellite images from San Francisco-based earth imaging company Planet Labs show that the words "Black Lives Matter" are visible from space.

The mural has quickly become a fixture of 16th Street in D.C., which also had the two-block area that bares the mural renamed to Black Lives Matter Plaza. Over the weekend, Apple updated its Apple Maps service to include a quickly patched together image that includes the mural, apparently updating just that stretch of street while leaving the rest of its satellite imaging the same. Google has not yet updated the actual visual for the street, but now lists that stretch of road as Black Lives Matter Plaza within Google Maps.

While the mural has been memorialized in just about all the ways that it can be, activists have not been fully satisfied with the effort. Black Lives Matter DC called the mural a "performative distraction" that was done to "appease white liberals while ignoring our demands." The group criticized Mayor Bowser for inaction and an unwillingness to "decrease the police budget and invest in community."

With that message in mind, the organizers of Black Lives Matter DC made a quick modification to the mural. They left the original message, but added a clear and concise demand for their elected officials: Defund the police. Mayor Bowser, who has not been willing to commit to the demands made by Black Lives Matter DC, did say that the city won't remove the addition made to the mural.

This has been the message that many activists across the country have started to deliver to their mayors, city councils, and other elected leaders. These demands, along with the ongoing demonstrations and protests happening every day, are starting to produce results. In Los Angeles, Mayor Eric Garcetti has agreed to slash the police budget by $150 million, while New York Mayor Bill De Blasio has promised to cut funding for the NYPD for the first time. In Minneapolis, the city where a police officer killed Floyd George, the city council has announced its intent to disband the police force and invest in community-based public safety initiatives. Mural or not, the messaging of protests seem to be working.