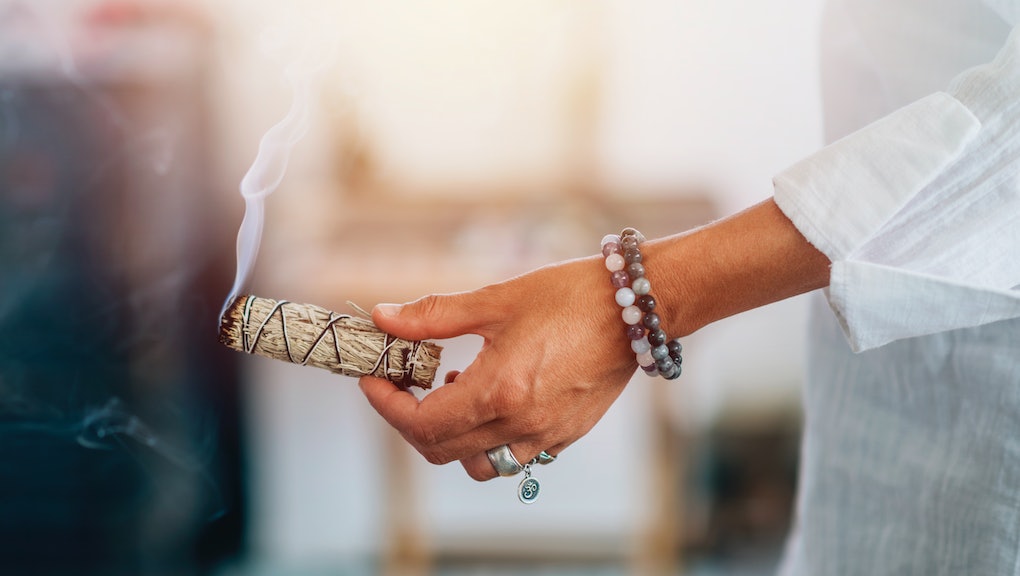 You might need to rethink your sage burning practice

Burning sage has become a ubiquitous practice that sits on a Venn diagram between wellness and spirituality. Instagram stories show influencers burning the herb, also known as smudging, as a way to cleanse themselves and their spaces of negative energy. Even big brands like West Elm and Urban Outfitters sell sage sticks. While smudging has grown more widespread as of late, it isn’t a “trend" — it's a sacred ritual long practiced by many Indigenous people. Given the American wellness world's dismal track record on cultural appropriation, all of this raises the question: How respectful is it to burn sage if you’re not Indigenous?

Ordering a smudge kit on Amazon takes mere minutes, but it can have real consequences for Indigenous communities — and in ways you might not even be aware of. Already, the rising popularity of smudging has resulted in the overharvesting of white sage, as well as the continuation of a history of companies profiting from Indigenous people’s medicines without compensating them, says YoNasDa Lonewolf, an Oglala Lakota and Black human rights activist. While companies bear responsibility, it’s still important for non-Indigenous consumers to smudge mindfully — that is, with an awareness of the potential repercussions of their practice on Indigenous communities.

But first, some background on smudging: Practiced by many Indigenous peoples in North America, smudging refers to smoke from the burning of sacred or medicinal plants, like cedar and sweetgrass, in order to drive out negative thoughts, according to Indigenous Corporate Training Inc. Lonewolf adds that "the smoke is often used as a portal between the physical and spiritual realm." It can also be bathed in or brewed into teas to flush toxins out of the body.

Demand for white sage has led to overharvesting of the plant in California, which is why many Indigenous people have called for a stop to its commercialization, Lonewolf says. Instead of cutting it at the midsection, as she was taught to do, non-Indigenous people often harvest sage by pulling it out by the root — which prevents it from growing back. Indigenous ancestral knowledge is crucial, in other words. "People need to learn what was passed down to us," Lonewolf says, not just dismiss it as "folklore."

For the Indigenous communities who have historically used the plant and regard it as sacred, the consequences of this loss are huge. “Our spiritual practices are very important for our livelihood, for our health, for our purpose,” Lonewolf says. “Sage must be saved.”

Commercialization of sage can also perpetuate cultural theft. “We’re seeing these corporations come to our land and want to learn for a summer and watch our ceremonies,” Lonewolf says. Then, thinking they've gleaned everything there is to know, they “take our medicines and profit from them.” And it’s not clear to what extent they’ve shared these profits with Indigenous communities, many of which struggle with poverty, suicide, and vanished and murdered women.

Some Indigenous people have pointed out that the commercialization of sage can divorce it from its deep spiritual significance, which only adds insult to injury. So does the fact that under federal law, Indigenous people in the U.S. couldn’t burn sage until only about 40 years ago. Thanks to the Longest Walk, in which Indigenous activists (including Lonewolf’s mother) and allies marched from San Francisco to Washington, D.C., they won back that right. Canada ended a ban on First Nations ceremonies about 70 years ago. Yet to this day, Indigenous people in both the U.S. and Canada can’t always smudge comfortably or freely.

That said, Lonewolf doesn’t believe Indigenous people “own” smudging. “We think these are all things the creator has given us to help us,” she says. “I think it’s a blessing that as Native Americans, that we do use [smudging], but it’s also a blessing that we taught others to be able to use that.” She notes that cultures in the Caribbean, Latin America, Africa, and Asia also smudge, although not necessarily with sage.

If you choose to smudge with sage, learn how to do so properly, Lonewolf says. Know that there isn’t one “official” method. Indigenous people aren’t a monolith. With hundreds of federally and non-federally recognized tribes in the U.S., “everyone has a different way of smudging.”

Apply the same mindfulness to your buying habits, too. Learn where the sage you’re considering came from. Lonewolf buys hers from Indigenous businesses, and notes that you can find Indigenous sellers on Etsy who grow their own. Buying from a big company can make it harder to confirm whether the plant was responsibly sourced.

“We also want to make sure… that when you’re buying sage, you’re thanking that sage for sacrificing its life for you to be able to use it," Lonewolf says. As a Lakota woman, she believes that we don’t own the land — we’re here to take care of it. Gratitude for what it gives us is integral to this stewardship.

If you’d rather avoid the murky waters and the risk of doing harm altogether, connect with your own culture’s traditions. Do some digging into your ancestors’ spirituality. “I think it’s really important for people to learn who they are and what their people practice… whatever your ethnicity is,” Lonewolf says.

This article was originally published on Dec. 18, 2020

More like this
Wanting to start a family motivated us to pay off $126K in a year
By Marianne Eloise
Can't bear to be in a relationship right now? Blame de-cuffing season
By Suzannah Weiss
How to stay sober when everyone's desperate to party
By Tracey Anne Duncan
Stay up to date