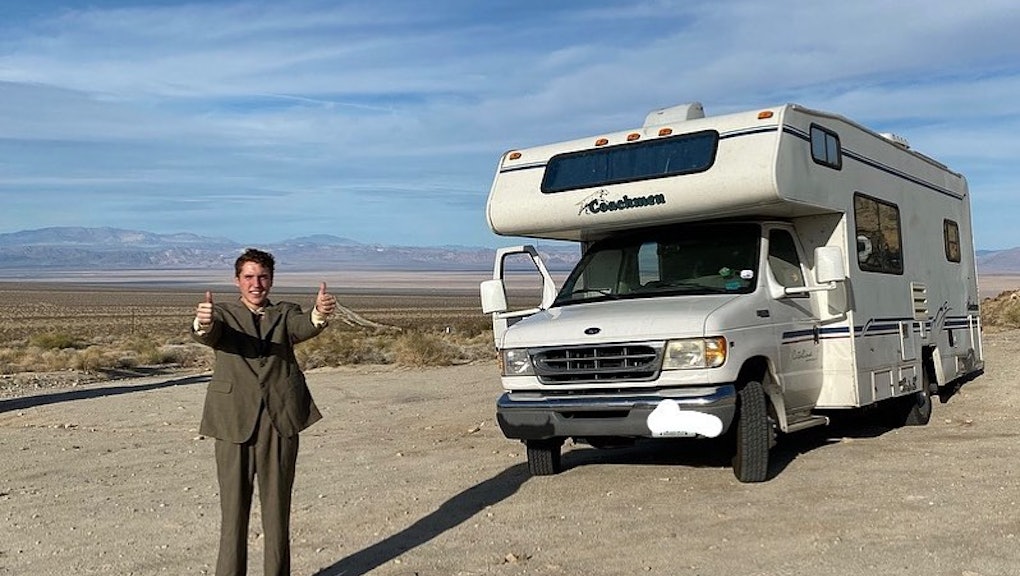 I needed to know why this man screamed "Butt Pussy."

The incident happened at the tail end of Andrew Callaghan's trip to a NASCAR weekend at Talladega Speedway for his intrepid YouTube docu-comedy series, All Gas No Brakes. On the outskirts of the twilit racetrack, a man in his late 40s hollers the words that have been imprinted on the inside of my skull ever since. For Callaghan, who started the YouTube series last summer and runs a Patreon for extended footage, it's part of unpacking the American experiment. The more time you spend on the fringes, the more folks like these you're likely to meet.

"It's an even mix of immersion and voyeurism," Callaghan, whose channel boasts over 1 million subscribers, told Mic. "A microphone is like a magnet, and when you think about what our job is, it's just chasing energy around the country. I pull up, and the people write the show for me."

All Gas No Brakes has a lot in common with the delirious social stunts of Eric Andre and Sacha Baron Cohen. Callaghan drives his RV to an epicenter of modern America — the Area 51 raid, the Border Security Expo, a 4th of July celebration in the middle of a pandemic — interviewing everyone who's willing to share their wisdom with the camera.

At a flat earth convention in Dallas, Callaghan broke bread with a man who can only be described as an anti-Ptolemy freestyle rapper. He proceeded to rap about the earth being flat. ("Earth is flat, jack/ Flatter than a flapjack/ Globers get your backpack.") During Callaghan's trip to the AVN Awards in Las Vegas, a father and son describe how thrilled they are to meet their favorite pornstars as a family. "It was worth all the money to get here," says the dad. At a Donald Trump Jr. book signing, an elementary-aged kid tells a joke about throwing Nancy Pelosi out of an airplane, and a woman attempts to make a case against interracial marriage. After watching enough of Callaghan's videos, it becomes clear how deep the rabbit hole of America goes.

A microphone is like a magnet, and when you think about what our job is, it's just chasing energy around the country.

Callaghan is 23, a recent journalism graduate from Loyola University in New Orleans. If he never found YouTube success, he says, he'd probably be a meteorologist on a local news station by now. He first honed his video skills during high school in Seattle, when his journalism teacher allowed him to leave class to produce amateur news segments documenting the oddballs around the city. Callaghan would point his lens at the tent cities that popped up for Occupy Wall Street, or the purple-clad juggalos, and listen to what they had to say. At 19, he hitchhiked around the country and conducted interviews with the "deadbeats, runaways, and outlaw-types" he'd find in the rock-bottom dives, motels, and truckstops that line the interstates. He would later condense those interviews into a book called All Gas No Brakes, which was the first thing in his portfolio that bore the name.

But Callaghan's initial brush with fame came in 2018, with his Quarter Confessions video series on Instagram. He'd venture into New Orleans' French Quarter at witching hour to experience the disorienting population that tends to fill in the alleyways of any party district after the bars shut down. It was those videos that caught the eye of Doing Things Media, who accepted Callaghan's wild pitch: Give me an RV, and I'll go anywhere you want.

"The next day, we were already buying the RV," says Reid Hailey, CEO of Doing Things. "We helped him find a videographer and put all the pieces in place. Burning Man was the first event. We were the sounding board for him creatively, but other than that, he's been on the road."

Like every other tour on earth, the production of All Gas No Brakes was halted in early March as America came to grips with the realities of an interminable pandemic. Initially, says Hailey, Doing Things wanted to take Callaghan off the road, as the swirling unknowns about the virus were at their most threatening. "I suggested doing podcasts over Skype, I was trying to be as safe as possible about it," he says. But Andrew petitioned to push forward, and sure enough, on April 26 he resurfaced with a crystalizing document of the anti-lockdown protests in Sacramento. The show must go on, and it was going to reveal how Americans were contending with a generation-altering event.

If the last four years have been marked by a widening gulf of antipathy and alienation between Americans, then All Gas No Brakes is the perfect articulation of our national confusion.

But already, it was clear that the priorities of All Gas No Brakes were beginning to pivot. The kooky mass gatherings that Callaghan used to regular do not exist during a pandemic; in their place, America has been rocked by a cavalcade of righteous anger, blinding chaos, and political upheaval — usually resulting in heavily armed law enforcement officers facing off against an emboldening social justice movement. And so, Callaghan made landfall in Minnesota during the riots that followed the death of George Floyd. He spoke to the demonstrators on the ground, and crunched through the broken glass of a big box department store that was being stripped for parts by the masses. Last month, he decamped to Portland at the height of ongoing unrest, and watched tear gas pellets rain from the sky, as ambiguous federal officers once again deemed the protests to be unlawful. Most of the faces of those he interviewed were blurred.

It is hard to call Callaghan's more recent oeuvre funny. There are certainly funny moments; in the Portland video he speaks to some frat boys in the streets who shout out their chapter in the middle of the pandemonium. But he expects that All Gas No Brakes will stay clear of some of the sillier content the show specialized in the past. Callaghan doesn't point to any intensified social pressure for that change in posture. Instead, he simply believes that his show needs to roll with the punches.

"This is my response to the Borat problem. When you get known for making troll-style journalism, you can't get the footage you want, because people are going to be onto you. It ruins the shoot," says Callaghan. "So I realized if I could mix some serious shit in with my comedic journalism, it would mean that people would be more receptive to an interview because they know they might not be made fun of."

He points to another passage in the Portland video, where Callaghan interviews a quintet of antifa teens dressed in full black bloc gear. ("I'm going to vote for anarchy," says one of them, when Callaghan asks who they plan on pulling the lever for in November.) Callaghan tells me that the only reason that group agreed to an interview is because they enjoyed his other All Gas No Brakes content; winning them over with his comedy, before attempting to do some honest-to-god reporting.

Callaghan stops short of basing his work in any political praxis. I asked him if his documentarian travels have given him an added understanding or appreciation for the polarities tearing America apart at the seams. He demurred, adding simply that he, "Hopes everyone will be okay." Callaghan also told me that he has yet to encounter anything in his All Gas No Brakes journey that he felt was too hot, or too weird, or too potentially litigious for YouTube; nothing juicy is left on the cutting room floor.

But if there is a unifying theme to Callaghan's show, it's that everyone, from all walks of society, is a shameless ham at heart. Given how unflattering All Gas can be towards some of its nuttier targets — conspiracy theorists, alien abductee enthusiasts — you'd expect Callaghan to have a lot of enemies. Not so, he says. He has built good relationships everywhere he's been; from Daytona burnouts to hardcore furries. "People love watching themselves get made fun of, even if it's indirectly," he says. The only people who don't like him, he says, are "extremely militant" right-wingers.

Maybe then, All Gas No Brakes offers a viable path forward. We can walk together with the flat-earthers and AVN misfits, and discover our common potential as a species. Perhaps we aren't that different after all. In 2020, I'll take any hope I can get.

More like this
The 8 best reality shows you're not watching, but should be
By Brandon Yu
The reason Simone Biles quit was more heartbreaking than we could've ever imagined
By Brandon Yu
How to end a text conversation without being rude
By Tracey Anne Duncan
Stay up to date