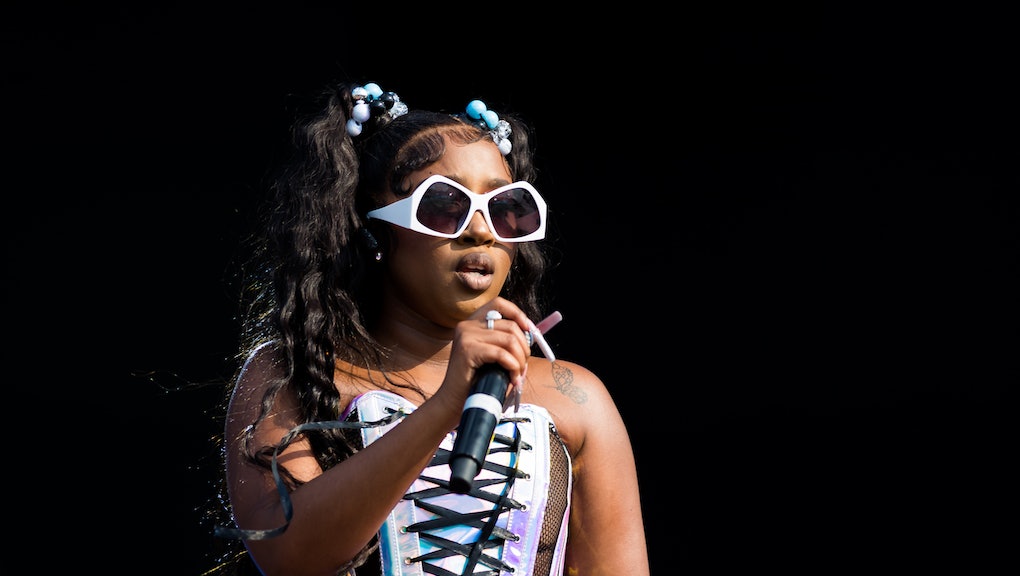 Before the pandemic, Yung Baby Tate was a consummate performer. Before she was putting immersive summer camp-inspired concerts with Red Bull or doing splits at Rolling Loud Miami 2019, the singer-rapper-songwriter-producer had been honing her live performance skills since the third grade and attended the 38th annual Grammy Award in 1996 in the stomach of her pregnant mother, singer Dionne Farris, who was nominated for Best Female Pop Vocal Performance nomination for her hit “I Know.” Being outside on stage has been part of Tate's life for as long as she can remember, a reality she seldom got to revisit prior to her performance at Lyrical Lemonade's Summer Smash festival on August 22, her first festival performance in nearly two years. While she is anxious to return to normal, she is not disregarding how COVID-19 is still prevalent and should be taken seriously.

"I love to perform, so going a year, almost two without performing was definitely kinda sad. I kinda want things to go back to normal, but I know it’s not that easy. Niggas got to get vaccinated and all types of shit for shows. I understand because it’s for safety precautions we have to take because this is our reality right now," Tate told Mic.

Tate spoke candidly with Mic backstage at Summer Smash following her performance about adjusting to her newfound fame, what her body told her about being back outside, and how the return of live shows is affecting her upcoming music.

With her curled mane flowing in the air, skin glowing under the Chicago sun, and a semi-holographic corset, Tate made sure her presence was felt on the Lyrical Lemonade main stage backed by her DJ, DJ Sky Jetta. For those in attendance, it appeared the pandemic performance drought hadn't affected Tate in the slightest. For Tate, her body was telling her a completely different story about what it takes to be back outside.

“I have to start working out, because chile, I almost died on that stage three times,” Tate laughingly said. “I was going so hard that by the time that last ‘I Am’ came around, I was like, ‘Can y’all sing the words for me? Sing it if you know it because I’m dying up here. This corset tight as fuck, I almost had an asthma attack.”

As the world paused, Tate's star rose beyond heights she had ever reached. She's foul-mouthed with an angelic voice and a mind of her own, allowing her to rap "pussy dripping and it's rainy like it got a cold" with lullaby vocal inflections. Add to that the fact she sings, raps, produces, and has a pen game adept enough to write for herself and others, and you have the makings of an unstoppable artistic force. Her self-love anthem "I AM" had everyone from Issa Rae to Kamala Harris's niece spreading her domineering affirmations all over TikTok. She generated more than 66 million Spotify streams in 2020 before she released a project. She partnered with Issa Rae's newly formed record label Raedio. Most recently, she's seen her Google search activity explode compared to last summer after starring in the latest season of Love & Hip Hop Atlanta.

While her life was changing on the outside, the pandemic had Tate sheltered from the IRL love. Besides doing a number of virtual performances for Rolling Loud, At The Crib Fest, and SXSW, Tate's pandemic was spent filming, recording, and bingeing. She played The Sims so much over the last 18 months she actually built a hotel within the digital world people could download and peruse through. She may have got digital glimpses into her growing celebrity via her increased social media following and a deluge of congratulatory tweets from fans. But, now that everyone is back outside, Tate has had to reconcile what she thinks her celebrity is with what the world is showing her.

“I got recognized at the airport flying here. I got recognized at the Apple store. It's getting different now, so I really do have to watch how I carry myself a bit more. I can't be walking outside with no bonnet on, word to Monique," Tate said before bursting out into laughter. "I used to be tweeting a bit more reckless two years ago and now I know I have to calm down because I have a larger audience. I’m on TV now. Niggas out here saw me and was like, ‘Aren’t you the girl from Love & Hip Hop? I was like ‘Jesus! Is that what I am now? God damn it.”

Bonnet etiquette won't be the only thing changing as Tate returns outside. In December 2020, at the tail end of a 2020 that isolated everyone from each other, Tate released After The Rain, a project largely defined by introspection and created during a time when outside was forbidden leaving inward the only place people could explore. Now, with live show appearances at Move Forward Fest, Day N Vegas, and Rolling Loud California within the next three months, outside is finding its way into her new music. “A lot of the songs on After The Rain were very personal. With the new music I’m making that’s not out yet, I’m definitely thinking, ‘This would be a fire moment live,’ or ‘this would make them jump.’”

As the year winds down, Tate is ready to release her new album next year, hit the gym to get her on-stage stamina back, and bless fans with new memories they were kept from because of the pandemic.