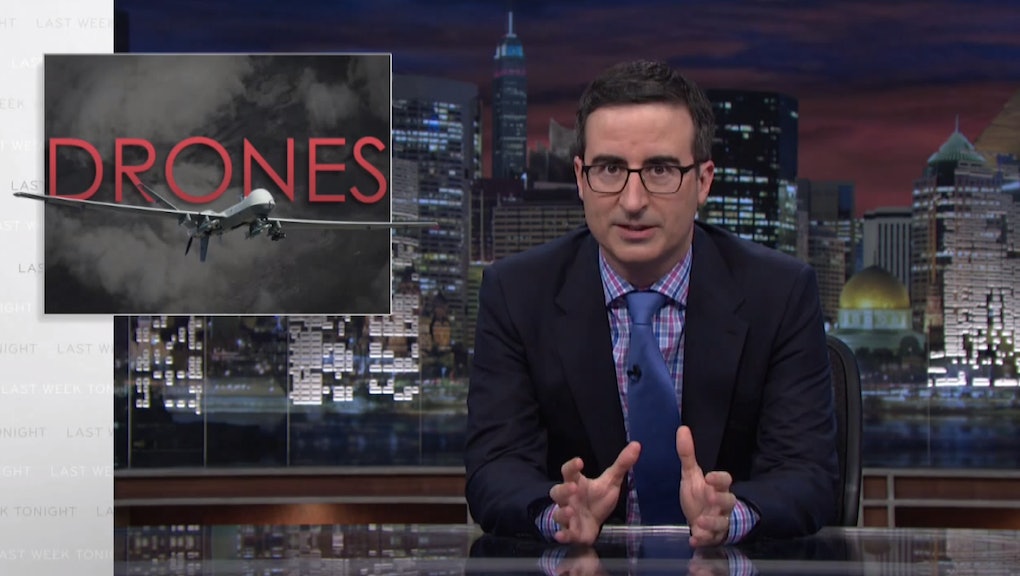 John Oliver Reveals the Terrifying Truth About Drones the U.S. Doesn't Want You to Hear

What does the U.S. government want us to know about drones? Approximately nothing.

Thankfully we have John Oliver, who continued to show his journalistic prowess with a gripping look at the United States' use of drones overseas. On Sunday's Last Week Tonight, the HBO host examined how ingrained the drone program is and why we don't bother to talk about it regularly.

Drones, according to Oliver, make people uneasy and don't exactly lend themselves to fun, happy-hour conversations. "Because drones strikes are one of those things that it's really convenient not to think about that much — like the daily life of a circus elephant or the fact that Beck is a Scientologist," he quipped. "You don't want people reminding you about those kind of things."

President Obama and drones: Without a doubt, the Obama administration is a strong proponent of using drones in the Middle East. Under his purview, drones have been launched eight times more when compared with his predecessor President George W. Bush.

"Drone strikes will be as much as a characteristic of the Obama presidency as Obamacare or receiving racist emails from distant relatives," Oliver said. He took a peek into what the U.S. government does know and found out that it actually doesn't know a whole lot.

Robot killers: According to his research, the CIA can't release a number of how many people it has killed (one report guesses between seven and 10 in one attack), who it has killed or even who authorizes the strikes. The only real factor in the government's decision to use a drone is whether the person or persons pose an "imminent threat," which, uh, means anything to them.

Oliver noted that people in countries like Pakistan, Yemen and Afghanistan live in constant fear of being attacked by a drone since they can't been seen or heard while flying above them.

"It is completely natural for us not to want to think about the consequences of our drone program, but when children from other countries are telling us we've made them fear the sky, it might time to ask the hard questions," he said.

"The problem is after a week of looking at this, it seems there are shockingly few available answers."