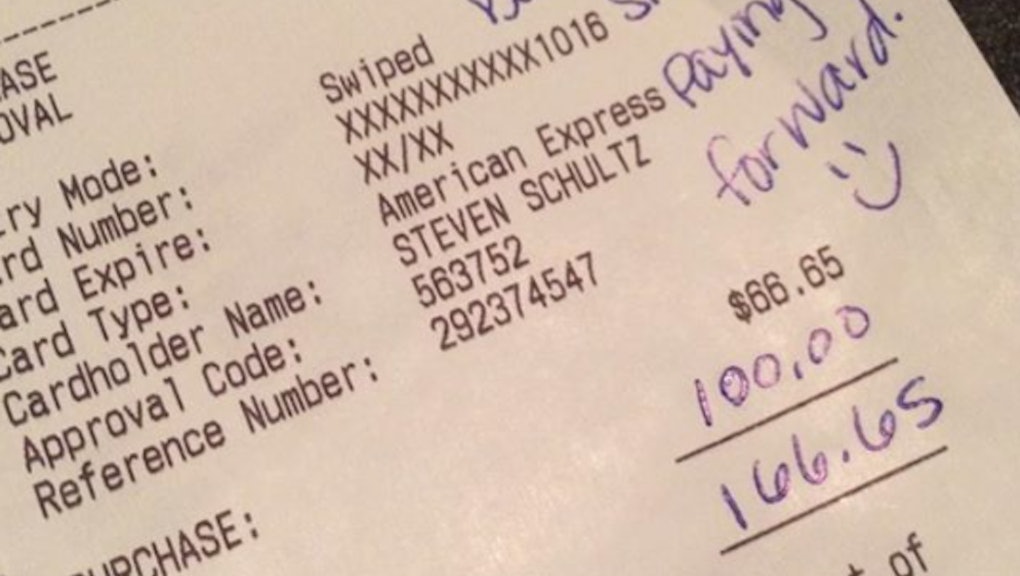 The news: Nothing ruins a nice dinner out at T.G.I. Friday's (or, you know, wherever) more than a rude waiter or waitress. It's only natural, then, for a diner to exact revenge by giving the server a stupidly low tip to teach them a lesson about customer service.

But one Iowa couple decided to take things in a different direction. Even though their service at Barbecue This! in Cedar Rapids "sucked," Makenzie Schultz and her husband Steve laid down a $100 tip on a $67 bill.

That's a 150% tip, despite the fact that it took 20 minutes to be brought water, 40 minutes for the appetizers and more for their entrees. They posted proof on their Facebook account on Saturday, where it quickly racked up more than one million likes in two days.

"People all around us were making fun of the restaurant and how bad the service was," Makenzie Schultz wrote in her post. "Yeah, it was pretty terrible."

If it was terrible, why did they leave that much money? The couple told Vocativ that they've walked a mile — well, more like several — in their server's shoes, because they met in a restaurant in Minnesota. They said they felt bad for him, since he was overworked, with a dozen tables in the house.

"There are many times when you just can't keep up, but you're trying your best," she said. "We felt for him,"

A bigger problem: Though the Schultzes' tip was a singular, contained act of generosity, it actually points to a larger problem within the service industry. Waiters and tipped workers live and die by good customer service and positive feedback. But many people don't realize that a bad night at a restaurant can stem from a number of problems, not just bad waitstaff.

Nevertheless, they're often the ones taking the blame while trying to get by on a meager minimum wage as low as $2.13 per hour, per the U.S. Department of Labor. A 2012 study revealed that nearly two million people make less than the federal hourly minimum wage of $7.25 per hour. So while states around the country fight to raise the minimum wage (usually with excellent results), a huge number of Americans are left earning a base wage of just $2.13 per hour, their fates more or less decided by disgruntled diners.

Although federal law requires that servers make at least the state's minimum wage when tips are factored in, detractors say the practice should be banned. Since tipping is "pooled among an entire restaurant's staff, it means that kitchen workers are often dependent on the waiter's service quality for compensation," writes Mic's Jess Remmington.

Obviously, there can be instances when a waiter is slacking off or just doing a terrible job, but the complexity of the restaurant industry means it's usually not as simple as "my food was late, screw the waiter." In fact, it's often the diner who's the bad guy. In other words, the customer is not always right.

"It wasn't about the amount of the tip, but it's about being understanding and being kind," Makenzie Schultz told WHO-TV. "Sometimes we need to take a step back, look at the whole situation and understand it and not judge it so quickly."