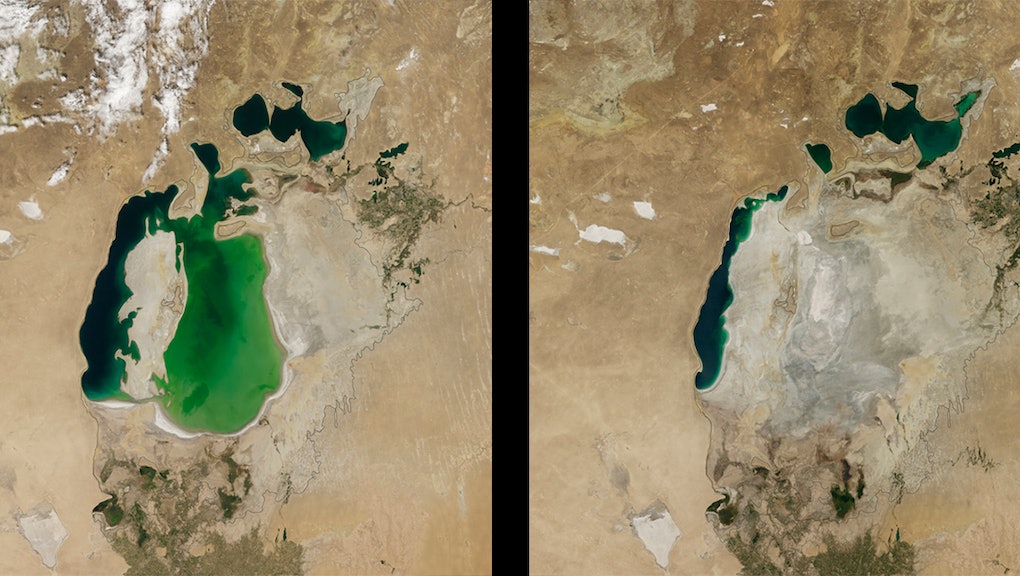 The news: One of the world's largest lakes has all but completely disappeared. Disturbing satellite photos released by NASA's Earth Observatory show the Aral Sea, nestled between Kazakhstan and Uzbekistan, has evaporated in just a few decades.

Once the fourth-largest lake in the world, the Aral Sea has been disappearing since the 1960s, but a bulk of it dissipated within the past 15 years. At its peak, it once encompassed more than 26,000 miles. It now looks virtually non-existent as scientists estimate that it's dropping a stunning 31 to 35 inches each year.

A historic happening: Philip Micklin, an Aral Sea expert at Western Michigan University, told NASA's Earth Observatory, as reported by Russia Today, this the first time that eastern portion has completely dried up. "And it is likely the first time it has completely dried in 600 years, since Medieval desiccation [drying out] associated with diversion of Amu Darya to the Caspian Sea."

Two problems sped up the evaporation problem. First, a drought between 2005 and 2009 was a huge blow to the region. Second, and as you can see in the GIF, a 2005 dam project built by Kazakhstan to shore up water supplies in the northern portion was made at the expense of the southern portion. All but a sliver of sea remains.

The blame can be placed on the former Soviet Union since, in the 1960s, they "began diverting its waters to irrigate surrounding areas and transform the deserts of Kazakhstan, Uzbekisan and Turkmenistan into crop land," CBS News reports.

Why it matters: The dissolution of the sea has had devastating effects on the fishing communities around its banks. On top of that, the salty sand and dust that makes up the basin has caused respiratory illnesses in residents and brutalized nearby crops.

"According to NASA, the loss of the water's moderating influence has also led to more extreme temperatures in the region, making winters colder and summers hotter and drier," CBS News reports.

A $16 billion project is required to bring the sea back to its original volume  — a cost virtually no Central Asian state can afford. As a result, the Aral Sea, once one of the largest and most beautiful lakes in Asia, will remain a crater.