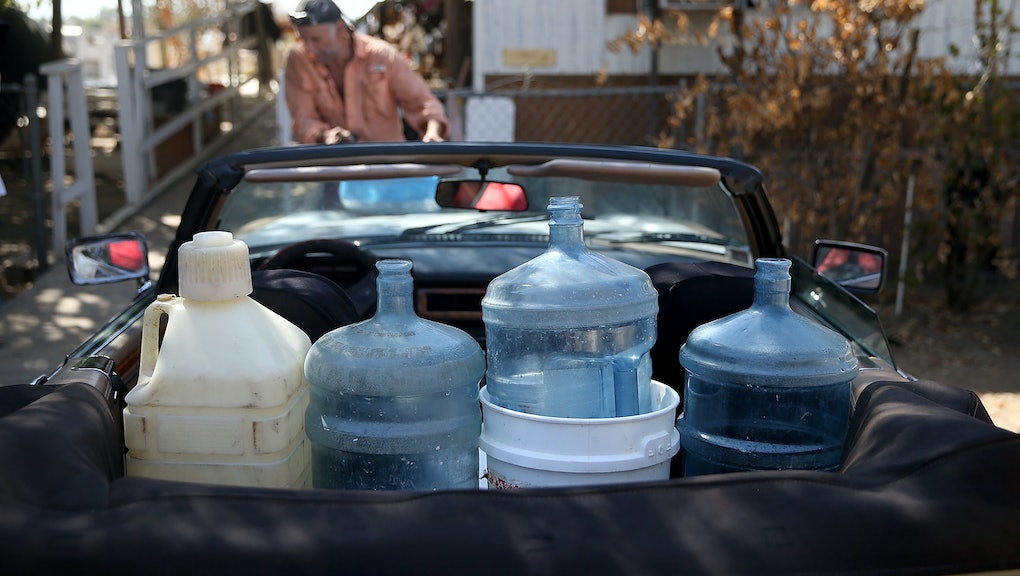 The news: California is shrinking.

Thanks to a horrendous drought, new satellite images that measure the Earth's gravity show that so much groundwater has disappeared from the state that it's had an impact on its gravitational field.

Scientists from United States and Germany discovered that from pictures obtained by the Gravity Recovery and Climate Experiment (GRACE) mission, two satellites that have been in orbit around the Earth since 2002.

The pictures show three major moments in the seemingly never-ending drought. The leftmost photo is from June 2002, soon after GRACE's launch. The middle image dates from June 2008, while the one on the right was taken in June 2014.

Wait, the drought is messing with gravity? As CityLab explains, enough groundwater has disappeared from the Golden State, pumped out of underground soil and rocks to sate thirsty farms and prevent crop death in the face of the ongoing drought, that the state has actually shrunk in mass over the past 12 years. Currently, the state's hardest-hit parts (i.e., where it looks the scabbiest on the June 2014 map) are the Sacramento and San Joaquin river basins. Water from those areas is being shipped down south to the barren San Joaquin Valley.

It sounds like science fiction, but it's not an uncommon occurrence. A good example is the West Antarctic ice sheet, where a rapid loss of ice between 2009 and 2012 "was big enough to cause a slight dip in the Earth's gravitational field over the region," reports Discovery News.

It's only getting worse. California has been locked in an extreme drought for the past three years and it's having devastating effects, including massive wildfires, water restrictions and brutal damage to its agricultural livelihood.

These jarring images from Lake Oroville State Recreation Area, a park near Sacramento, show a lake at just 32% capacity. Much of that disappeared within the past three years.

In an attempt to conserve water, some towns in California enacted a $500-per-day fine for those caught watering their lawn, washing cars or even turning on their snazzy outdoor fountains. A report in Thursday's New York Times highlights one family's challenges in the new drought order:

The Gallegos family's drinking water comes only from bottles, mostly received through donations but sometimes bought at the gas station. For bathing, doing dishes and flushing toilets, the family relies on buckets filled with water from a tank set in the front lawn, which Mr. Gallegos replenishes every other day at the county fire station. Often, the water runs out before he returns home from his job as a mechanic, forcing Ms. Gallegos to wait for hours before she can clean.

Several states in the West are locked in a "megadrought." Toby Ault, a scientist from Cornell University, described it as a "great white sharks of climate," since they are hard to detect and can deal a devastating blow to the environment.

"Megadroughts are a threat to civilization," he told USA Today. "They could possibly be even worse than anything experienced by any humans who have lived in that part of the world for the last few thousand years."