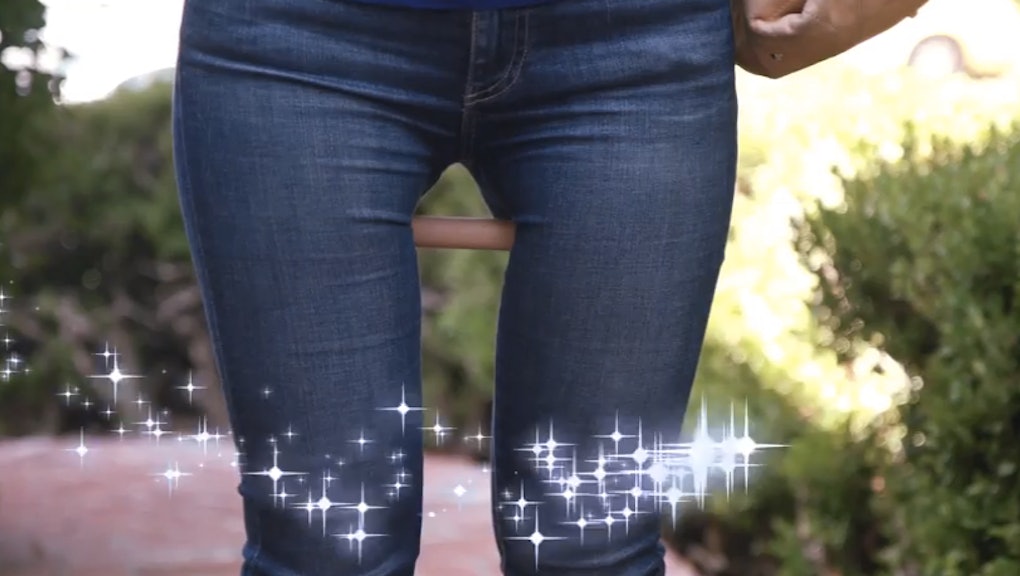 Women Can Now Buy a Thigh Gap with Their Jeans

Move over, Gap: You're about to be unseated by a new jean superstore, and it's all about perpetuating unrealistic standards of beauty.

All-lady sketch team JustBoobs has released a hilarious new video poking fun at the absurdity of America's thigh gap obsession, otherwise known as "the only standard for beauty."

Unattainable body standard? Hardly! For just $69.99 (on sale!), Thigh Gap customers can get that coveted space between their legs, all courtesy of a wooden stick (available in one, two or three-inch sizes) they can jam between their upper thighs.

Sure, it's really painful, but at the end of the day, isn't beauty all about pain? Women have been angsting about their bodies for decades; Thigh Gap jeans merely makes that suffering tangible. As one comedian quips, "My doctor tells me I'm healthy and in great shape, but I still feel like a fat cow who shouldn’t be allowed in public!"

Thankfully, of course, the Thigh Gap jeans would never work in real life. But the sketch's humor underscores just how ridiculous the whole thigh gap phenomenon has become. Far from being something any woman should aspire toward, thigh gaps — as well as most other beauty trends, honestly — are nothing but a ploy to make women feel bad about themselves in an effort to market products. Case in point: the billions of dollars women and men spend every year to make sure they appear unnaturally hairless.

This video isn't the first to take this highly problematic trend to task, of course. Several companies have been caught Photoshopping thigh gaps into their ads, inciting widespread criticism from body-postive advocates. Meanwhile, Barbell Apparel attempted to go in a different direction entirely, launching a campaign to develop anti-thigh gap jeans to prove that healthy doesn't have to mean skinny.

Remember, ladies: Despite the Thigh Gap's tongue-in-cheek slogan ("Because you aren't good enough"), the size of your legs in no way determines your value.