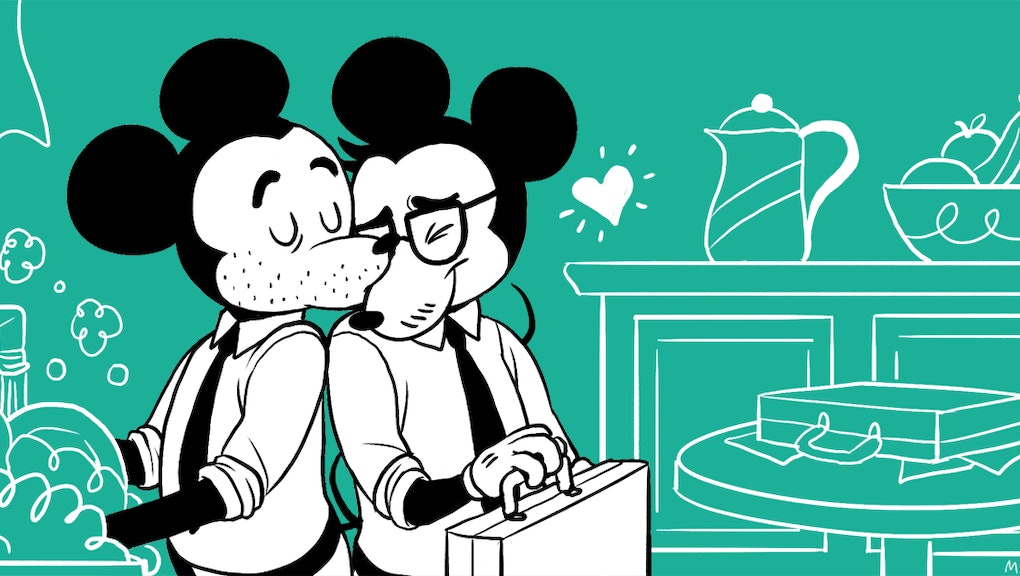 Sorry Minnie, Mickey Mouse is coming out of the closet.

Americans were first introduced to our country's most famous mouse in 1928 as part of the short film Steamboat Willie (the first cartoon that featured sound, according to TIME.) Walt Disney's Mickey quickly became a hit, appearing in over 100 cartoons and becoming the face of an international animated empire. But even cartoons get lonely — Minnie was created as Mickey’s companion, and the dynamic duo became a heteronormative power couple.

But a lot has changed in America since 1928. Mickey and Minnie's hero/damsel-in-distress trope isn't only outdated, it's no longer a reflection of reality. Couples today don’t exactly fit those roles, nor are those gender roles exactly "ideal." In a beautiful reimagining of the original cartoon, Mic has commissioned this exclusive artwork by Mady G. Because in 2014, Mickey should be free to love whomever he loves — even if the mouse of his dreams happens to be named Mike.

The artwork is adorable, but there's a serious point to be made here as well. Despite the growing openness of LGBT couples in the United States and the wave of marriage equality laws being passed to legalize their unions, Disney has yet to produce a same-sex love story in any official capacity. Although some have pointed to possible hints of non-heteronormative sexualities in recent years — Frozen arguably featured a same-gender family for all of three seconds — Disney has resisted calls from fans to break out of the heteronormative mold in the animated world. (To its credit, Disney has shown same-sex couples recently in other programming, particularly the acclaimed ABC Family Show The Fosters as well as Good Luck Charlie.)

Plus, inclusion is good for business. Other family-oriented companies including JC Penny and Cheerios have successfully showcased same-gender couples, even in the face of conservatives boycotts, without hurting their market share, proving that companies can take a pro-equality stance and still make money.

The millions of children of LGBT relationships, not to mention children who may one day grow up to be in an LGBT relationship, deserve to see families that look like theirs in beloved cartoons. The same goes for other tropes as well. Just as impressionable young minds need to realize love isn't constrained by gender, so should they be taught that the princess can save another princess, and sometimes princes end up with other princes.

In 1928, a gay Mickey Mouse had about as much chance making it to the silver screen as a black man becoming president. But as we approach Mickey's 90th birthday, isn't it time we get on the right side of history? As these cartoons so beautifully illustrate, there's nothing more family friendly than a story about two individuals who love each other no matter what.

All images courtesy of Mady G for Mic