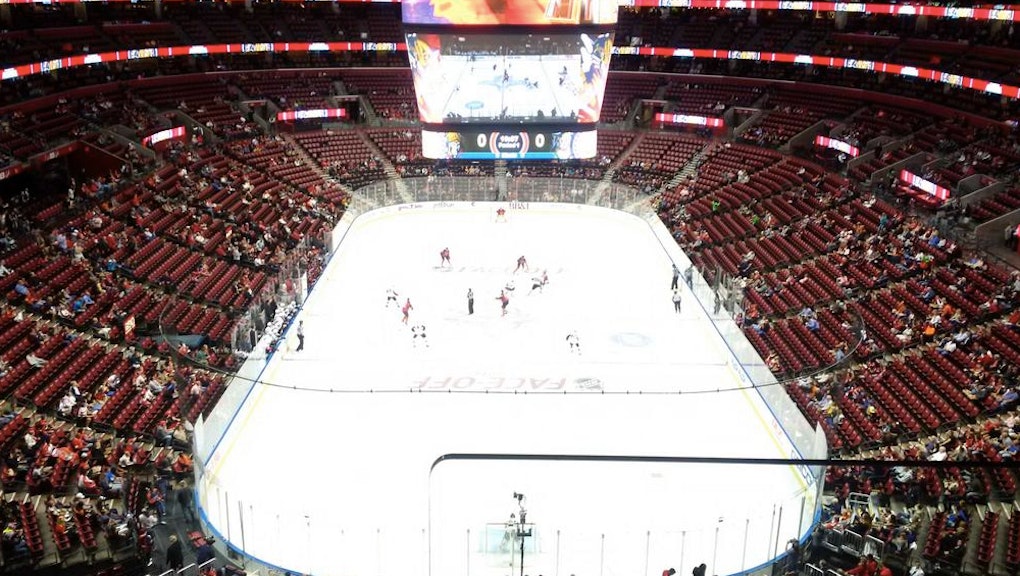 5 Tweets Show Just How Much Florida Cares About Hockey

The news. In Florida, hockey supporters are truly fair-weather fans — in that they'd rather be anywhere else.

At last night's matchup between the NHL's Florida Panthers and Ottawa Senators at the BB&T Center near Miami, fans were few and far between. Ottawa Sun hockey writer Bruce Garrioch was there and tweeted pictures from the postapocalyptic scene.

Nearly no one showed up to the warm-up:

But who wants to watch practice? Surely, game time will be better:

Oh, uh, guess not. And the arena didn't look any busier after the first period.

It looked equally depressing when the lights were turned on.

Icy reception. So, how many bored South Floridians tore themselves from their lounge chairs? The Panthers said the official count was 7,311, the lowest in team history and likely saddest in NHL history.

After the game, the lack of excitement seemed to bother the players, one of whom said they had to "create their own energy" because the fans there didn't even realize there was a game happening.

Last night's game continues a depressing trend for the 0-3 team. Even though the BB&T Center can hold around 20,000 people, only 11,000 fans showed up for the team's home opener, which was another record low for the struggling franchise.

The Panthers have perennially been one of the NHL's bottom-dwelling teams. Last year, the attendance at home games only averaged around 14,000 people, placing it second to last among all 30 NHL teams. Another team in a warm-weather state, the Arizona Coyotes, settled in last place.

And an icier future. The Florida Panthers are a troubled franchise. They haven't won a playoff series since 1996 and have been losing money ever since, ESPN reports. Speculation constantly surrounds the teams' owners that they're going to relocate it to a colder climate, where hockey tends to do better.

The owners, Vinnie Viola and Doug Cifu, deny that. The duo released a letter last month restating that they plan to keep the team in South Florida, even if no one there knows who they are.

"As we said at the press conference when we bought the team, we view ourselves as stewards of the team for the community and our plan is to build an organization that makes South Florida proud and to win the Stanley Cup in South Florida," the letter read. "Despite media speculation to the contrary, we have no plans or intentions to move this franchise."

It's not all doom and gloom for the Panthers. Take the Pittsburgh Penguins, who, seven years ago, threatened to leave the city if it didn't build a new arena. The city and the team finally reached an agreement. Now the team has been division champions for the past two seasons, with a greatly improved roster and tickets that are nearly impossible to get a hold of.

The Panthers need to regain their fan base. They should start with a win. One win. Anything.