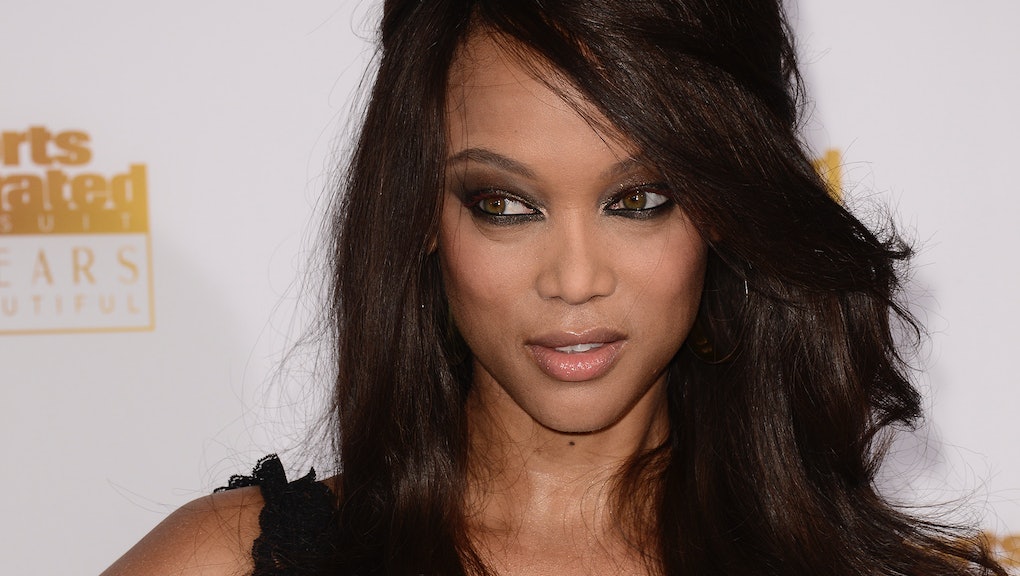 Can you be a Victoria's Secret angel and a feminist? Tyra Banks sure thinks so.

In a recent interview with Yahoo Beauty, the supermodel turned businesswoman said that, in her mind, strutting down the runway with a curvy body was a feminist statement in itself.

"I do consider myself a feminist, yeah," she told Yahoo. "Totally."

Although feminist scholar bell hooks would almost certainly disagree, Banks asserts that being a Victoria's Secret angel in her "bra and panties" and being a feminist aren't mutually exclusive.

"Sure, I was stompin', and I know guys were like, 'Woo, look at Tyra,'" she said. "But I know that my body being thicker on that runway meant something. A lot of the things I did in my modeling career as a woman of color was part of that feminism — of expanding the definition of beauty and making women feel beautiful, no matter what color their skin is."

Indeed, Banks' influence in the fashion industry has been felt on several levels. As she notes, as a young woman, Banks aimed to brand herself as a curvier standard of beauty, something of a departure from the stick-thin high fashion runway models of the 1990s.

"I made my living being 20 or 30 pounds heavier than the average model," she told the Guardian in 2007. "And that's where I got famous. Victoria's Secret said I sold more bras and panties than anybody else, and I was traipsing down that runway with 30 pounds more booty than the other girls."

Banks also broke down barriers for women of color. At a time when dark-skinned women were still mostly absent from magazines and runways, she was the first black woman to make the cover of Sports Illustrated. Given that the proportion of black models for New York Fashion week this year was barely 10%, diversity is still a problem the fashion industry has not fixed.

Of course, Banks isn't just a pretty face — she's also a fearless entrepreneur, heading up the America's Next Top Model empire as well as her own cosmetic company. Even in these business endeavors, however, Banks has said she wants women to feel empowered in their lifestyle choices. Banks stressed that she doesn't perceive makeup as oppressive, but rather as a potentially liberating force for women.

"I would have never been a supermodel were it not for makeup," she told Fast Company. "Makeup truly transforms me and the more I put on, the more I look like a supermodel, to be honest. And so I look at makeup as the great equalizer. You don't have to necessarily be born a certain way; you paint it on and you can compete in whatever way we deem to be necessary."

Feminists have been debating the make-up question for years: Can a woman call herself a feminist and also love her lipliner, blush and foundation? Laverne Cox and bell hooks recently wrestled with this same question, after hooks criticized the Orange Is the New Black Star for wearing a blonde wig and high heels.

As Cosmopolitan editor Joanna Coles told NPR this week: "I think that women's lives are multilayered. I have no problem understanding that women are interested in mascara and the Middle East. Men are allowed to talk about sports relentlessly and yet we still take them seriously. I don't understand why women can't talk about fashion, or sex, or love or wanting more money and not be taken as seriously as men."

Ultimately, whether it's her brains or her beauty, Banks is not afraid to let it all hang out.

"Right now, with women in power, and not apologizing for being strong or wanting to make money or to be on top, that's my message — and that's all feminism," she said. "I just feel like you should be able to have a fierce face at the same time."