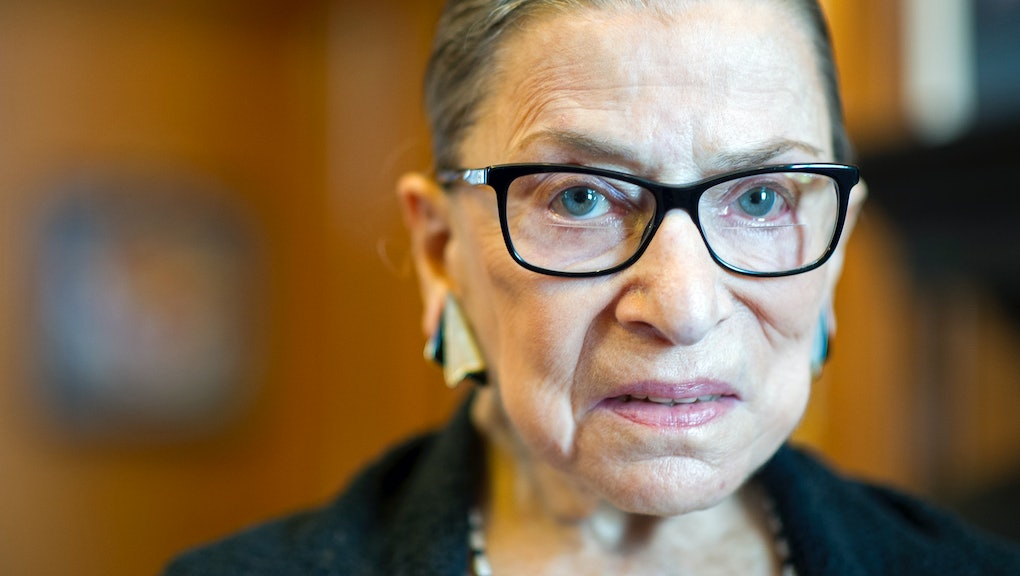 Ginsburg penned a six-page dissent, issued Saturday morning, condemning the Court's ruling, which allowed Texas to keep its controversial voter ID law in place for the upcoming elections. Under the law, voters must bring photo identification with them in order to vote. Ginsburg joined Elena Kagan and Sonia Sotomayor as the only justices to dissent in the case.

The dissent: Ginsburg openly called the Texas law discriminatory and argued that Texas could easily go back to its previous electoral procedures, even this close the election. (Early voting starts on Monday.)

"The greatest threat to public confidence in elections in this case is the prospect of enforcing a purposefully discriminatory law, one that likely imposes an unconstitutional poll tax and risks denying the right to vote to hundreds of thousands of eligible voters," she wrote.

Ginsburg notes that the law could may prevent more than 600,000 registered Texas voters (about 4.5% of all registered voters) from voting, and "a sharply disproportionate percentage of those voters are African-American or Hispanic."

"The potential magnitude of racially discriminatory voter disenfranchisement counseled hesitation before disturbing the District Court's findings and final judgment," she wrote. "Racial discrimination in elections in Texas is no mere historical artifact. To the contrary, Texas has been found in violation of the Voting Rights Act in every redistricting cycle from and after 1970."

Other laws: Texas is one of 20 states that currently require photo identification in order to vote. There are 14 more states that require non-photo IDs.

While supporters say photo IDs reduce voter fraud, the problem isn't quite as widespread as legislators may believe. A study earlier this year found 31 credible cases of fraud in a sample of one billion votes cast. Requiring identifications like drivers licenses tends to disenfranchise lower income voters, who are less likely to have gone through the process of applying for and receiving them.

Low income voters — especially black and Hispanic ones — are much less likely to vote for Republicans. A cynical observer could come away with the idea that supporting voter ID laws is a way to keep them away from the polls rather than a way to avoid fraud. Despite those protests, and those of Ginsburg, Texas' law will remain in place.