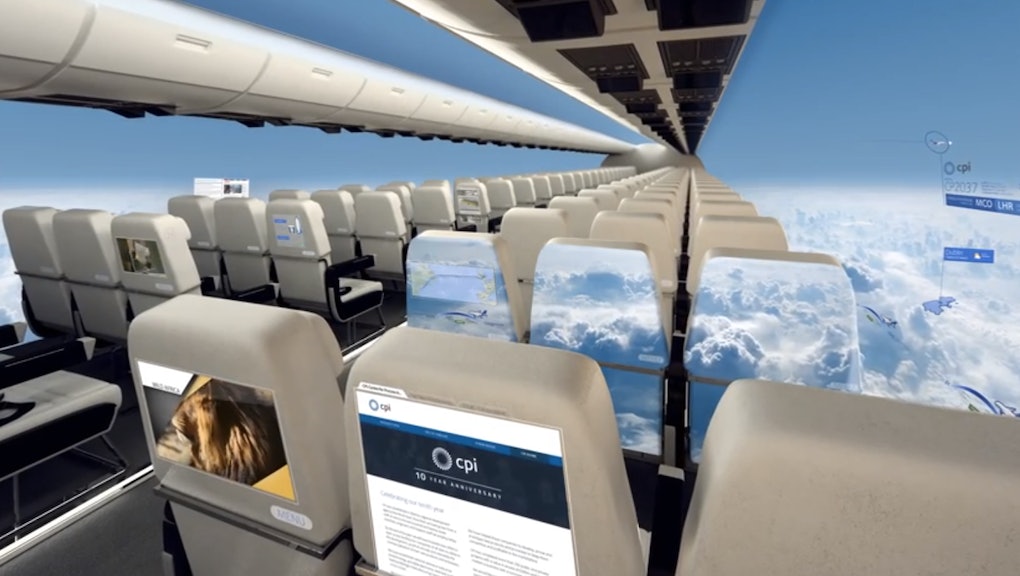 This Windowless Plane of the Future Is Every Air Traveler's Nightmare

The news: If you weren't afraid of flying now, you might be soon.

A British aerospace company released pictures Sunday of its "windowless" plane concept that would make even the most fearless flyers very nervous. The Centre for Public Innovation (CPI) has an idea to replace those dark and dreary cabins with large, sweeping organic LED screens that could show a live video feed from outside.

The firm envisions the screens encompassing the whole cabin of the plane, except perhaps the floor. Besides showing video from the outside (which could induce vertigo or a baggage of other anxieties for nervous flyers), the screens might display movies, the Internet or even, if you can believe it, nothing.

CPI released a video of the concept:

It's an environmentally friendly solution: CPI thinks the idea will take off with manufacturers within the next 10 years as companies look to build lighter jets. Airlines are demanding lighter planes that burn less fuel and save airlines money.

As it happens, those little portal windows are deceptively heavy. The plane's fuselage needs to be strengthened to keep the windows from snapping in extreme temperatures brought on by the plane's constantly changing altitude. CPI says that for every 1% reduction in weight, there's a 0.75% fuel saving — a figure that adds up when tons of windows are removed.

"If you save weight, you save fuel," CPI claims. "And less fuel means less CO2 emissions into the atmosphere and lower operational cost."

This still scares us. Sure, saving the environment is a novel feat, but does it have to come at the expense of our anxiety levels?

It's estimated that 6.5% of the population suffers from aviophobia, the fear of flying, and there's a good chance that will increase if passengers have to look at the 35,000 feet below them for six hours at a time.

Plus, what happens when the screens malfunction and you're left to look at this?

It could be worse, though: Think of a flight that's one big Hollywood Game Night rerun.