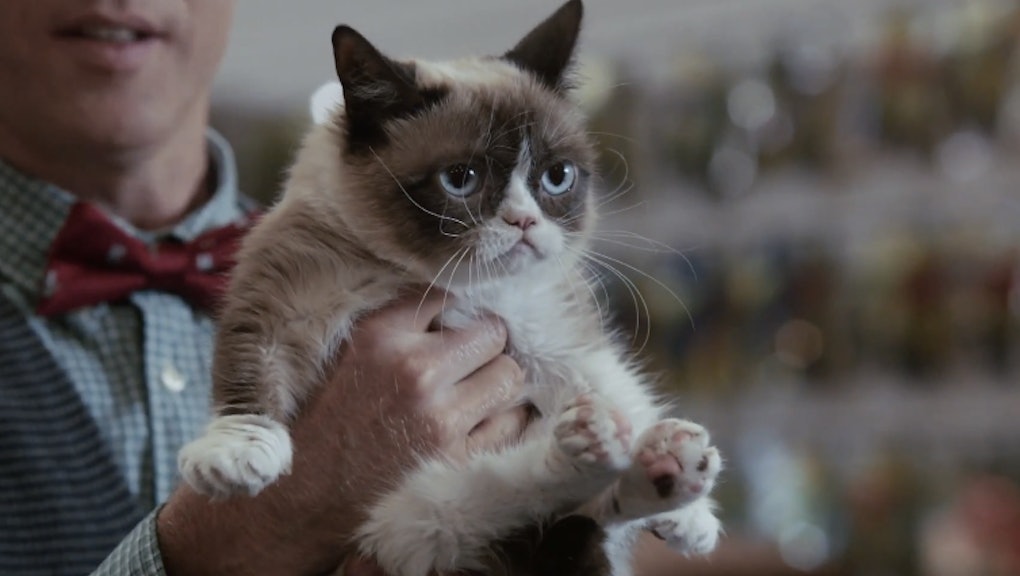 Nobody asked for this movie, but it exists anyway.

Lifetime released the trailer for its upcoming Grumpy Cat's Worst Christmas Ever, and it's about as bad an idea as you thought it would be. The movie centers around the cat, voiced by Parks and Recreation star Aubrey Plaza, who spends all of her time looking grumpy as she's being thrusted around in the arms of no-name actors to further be exploited.

Grumpy Cat, a.k.a. Tardar Sauce, clawed herself into fame two years ago. The poor thing suffers from feline dwarfism — hence its uniquely droopy face — and the Internet's appetite for gawking at silly things catapulted the cat as a meme into an empire filled with tacky merchandise. It was only a matter of time before there was a movie.

Judging by the one-minute clip, the cat still isn't treated with any damn respect. The thing about the movie is that the holidays are about love and happiness while, get this, Grumpy Cat hates all of that! It's crazy!

We're not entirely sure what the movies is about, but it looks like a girl talks to Grumpy Cat and then Grumpy Cat is mean to her? I don't know, but Plaza's grouchy voice sounds like she just read the script for the first time and is already regretting this.

If this does well, though, we might just have to deal with Apparently Kid: The Movie next year.